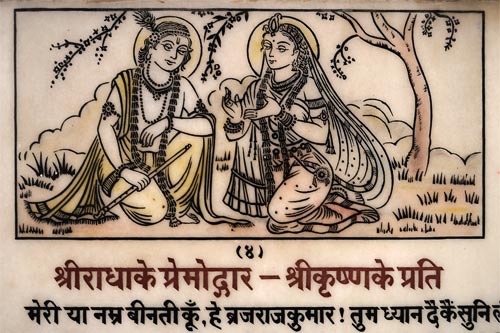 Painting of Krishna and Radha on temple wall, Vrindavan


Located on the banks of the Yamuna River in the state of Uttar Pradesh, the town of Vrindavan is the site of an ancient forest where the Hindu deity Krishna spent his childhood days. Approximately 15 kilometers from Mathura, the city of Krishna’s birthplace, the town has hundreds of temples dedicated to the worship of Krishna and his consort Radha.

Krishna, an incarnation of Lord Vishnu, was born in the long ago era of the Dwapara Yuga as the eighth son of the Yadava prince Vasudev and his wife Devaki. To save him from the murderous intentions of his maternal uncle Kansa, Krishna was taken soon after birth to Gokul, the village of cowherds in Vrindavan. There he was raised in the care of his foster parents Nanda Maharaj and Yasoda. 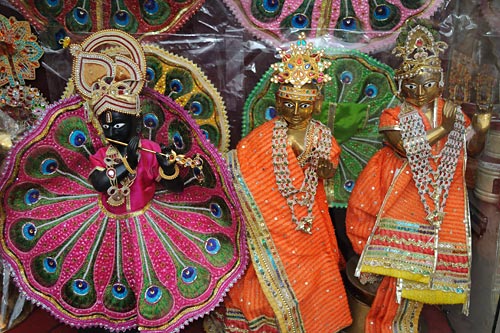 
A Hindu scripture, the Bhagavata Purana, describes Krishna's childhood pastimes in the Vrindavan forest where he, his brother Balarama and his cowherd friends engaged in youthful pranks. Krishna danced with the local girls known as gopis, hid their clothes while they bathed, spread the message of divine love with his lover Radha, and subdued various demons. These pastimes were the source of inspiration for the famous 13th century poem, Gita Govinda, by the Sanskrit poet, Jayadeva.

It is believed that the spiritual essence of Vrindavan was lost over time until the great saint Chaitanya Mahaprabhu rediscovered it. In the year 1515, Chaitanya visited Vrindavana, and wandering through the sacred forests located the holy places associated with Krishna's divine actions. 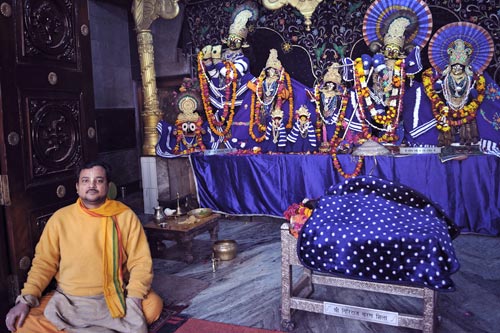 Hindu priest with statues of Krishna and Gopis, Vrindavan


Vrindavan is an important Hindu pilgrimage site, especially for the followers of the Vaishnava tradition, which maintains numerous temples and monastic dwellings known as ashrams. Many millions of devotees of Krishna and Radha visit these places of pilgrimage every year and participate in colorful festivals that relate to the scenes from Krishna's life.

Vrindavan is also known as the City for Widows because of the thousands of widows who seek refuge there. By Hindu tradition, widows may not remarry but should devote their remaining years to spiritual liberation. Some widows leave their families after the death of their husbands (or their families leave them) and make their way to the holy city of Vrindavan. In exchange for singing sacred hymns known as bhajans in the temples these women are given meals and a little money. 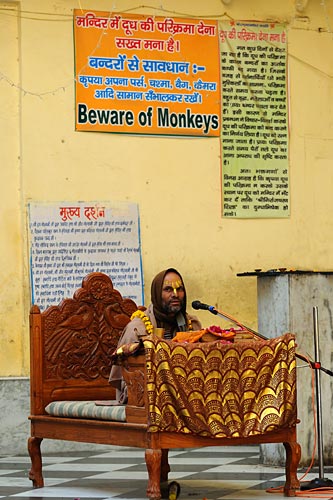 A priest chanting at a Krishna temple in Vrindavan 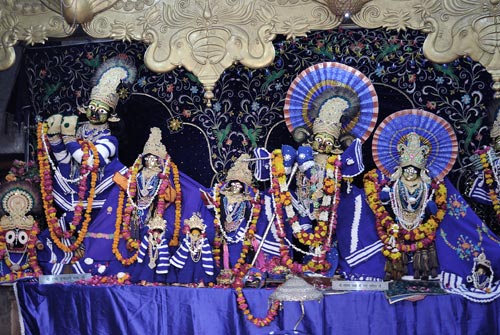