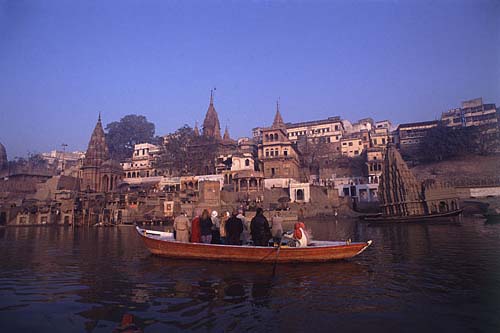 
Banaras is the most visited pilgrimage destination in all of India. One of the seven Holy Cities, one of the twelve Jyotir Linga sites and also a Shakti Pitha site, it is the most favored place for Hindus to die and be cremated. Myths and hymns speak of the waters of the Ganges River as the fluid medium of Shiva's divine essence and a bath in the river is believed to wash away all of one's sins. The particular river-side location of Banaras is considered especially potent because, in less than six miles (ten kilometers), the Ganges is met by two other rivers, the Asi and the Varana. Commenting of this specific location of Banaras along the river Ganges, the Hindu scripture Tristhalisetu explains that,

There whatever is sacrificed, chanted, given in charity, or suffered in penance, even in the smallest amount, yields endless fruit because of the power of that place. Whatever fruit is said to accrue from many thousands of lifetimes of asceticism, even more than that is obtainable from but three nights of fasting in this place.

Known in different eras as Avimukta, Varanasi and Kashi, meaning “where the supreme light shines”, this great north Indian center of Shiva worship has had more than 3000 years of continuous habitation. Few standing buildings are older than the 16th century, however, as Muslim armies raiding from the 11th century onward destroyed the ancient Hindu temples and erected mosques on their foundations. Qutbuddin Aibak's armies were said to have destroyed more than a thousand temples in 1194, and Shah Jahan, the builder of the Taj Mahal, had seventy-six temples demolished. The city's primary Shiva shrine, the Jyotir Linga Visvanatha or ‘Golden Temple’, was rebuilt in 1776 across the road from its original location (now occupied by the Jnana Vapi mosque). Adjacent to this mosque is the Jnana Vapi well, the ritual center and axis mundi of Banaras. The Jnana Vapi, or Well of Wisdom, is said to have been dug by Shiva himself, and its waters carry the liquid form of Jhana, the light of wisdom. The imposing Alamgir mosque stands on the site of another of Kashi's most ancient and sacred shrines, the temple of Bindu Madhava.

In Hindu Kashi, it is said there are thirty-three hundred million shrines and a half a million images of the deities. Since a pilgrim would need all the years of his or her life to visit each of these shrines, it is considered wise to come to the holy city and never again leave. While this enormous number of shrines is perhaps a trifle exaggerated, Kashi does indeed have many hundreds of beautiful temples. Some of these temples are named after the great tirthas, or pilgrimage centers, in other parts of India - Rameshvaram, Dwarka, Puri, and Kanchipuram, for example - and it is said that merely by visiting Kashi one automatically gains the benefit of visiting all other sacred places. Most pilgrims make only short visits of days or weeks to Kashi, while others come to spend their remaining years in the holy city. Those who come to live in Kashi with the intention of dying there are called jivan muktas meaning those who ‘are liberated while still alive’.

Kashi is also traditionally called Mahashamshana, ‘the great cremation ground’. Hindus believe that cremation at the holy city insures moksha, or 'final liberation of the soul from the endless cycle of birth, death, and rebirth'. Because of this belief, dying persons and dead bodies from far-off places are brought to Kashi for cremation at the Manikarnika and other cremation sites (five principal and eighty-eight minor cremation/bathing sites lie along the Ganges). In her book, Banaras: City of Light, Diana Eck writes:

Encircling the holy city at a radius of five miles is the sacre d path known as the Panchakroshi Parikrama. Pilgrims take five days to circumambulate Kashi on this fifty-mile path, visiting 108 shrines along the way. If one is unable to walk the entire path a visit to the Panchakroshi Temple will suffice. By walking round the sanctuary of this shrine, with its 108 wall reliefs of the temples along the sacred way, the pilgrim makes a symbolic journey around the sacred city. Another important Banaras pilgrimage route is the Nagara Pradakshina, which takes two days to complete and has seventy-two shrines.

Today, a crowded, bustling, noisy, dirty city, Banaras was in antiquity an area of gently rolling hills, lush forests, and natural springs bordered by the magical waters of the river Ganges. A favored hermitage site for many of India's most venerated sages - Guatama Buddha and Mahavira, Kabir and Tulsi Das, Shankaracharaya, Ramanuja and Patanjali all meditated here - Banaras has been and continues to be one of the most visited holy places on the planet. First-time visitors to Banaras may find themselves initially overwhelmed by sensory stimulation, yet just beneath the surface is a presence of peacefulness and spiritual wisdom.

Readers interested in studying Banaras in greater detail are encouraged to consult the writings of Diana Eck, Roger Housden, Savitri Kumar, and Rana Singh listed in the India bibliography. 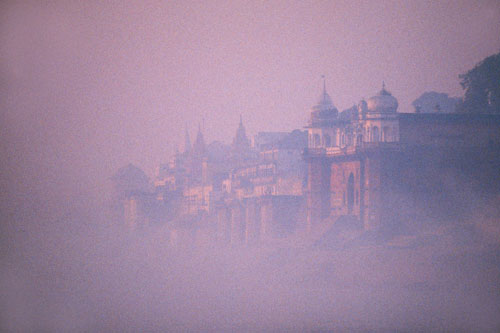 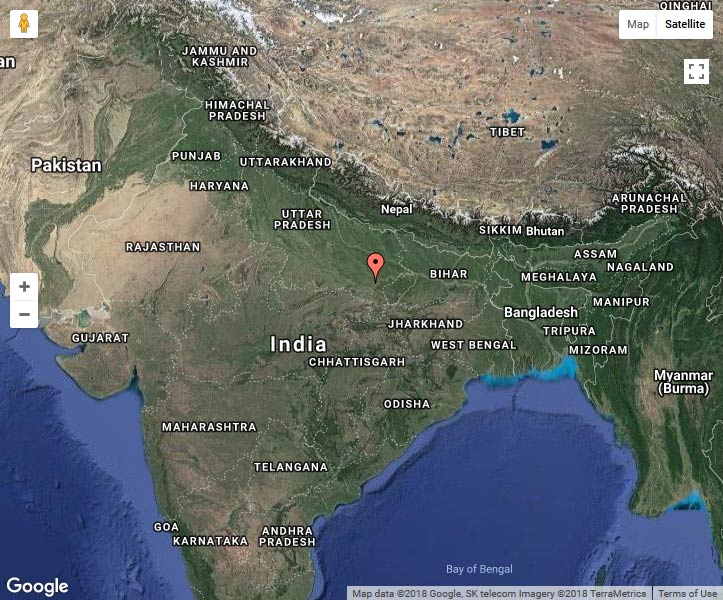