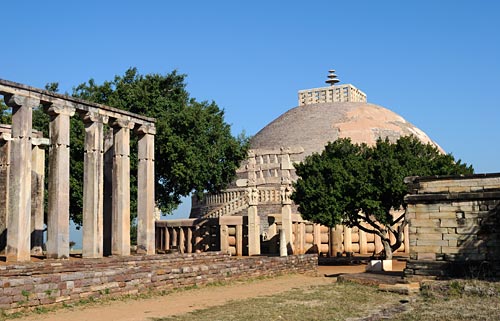 
Sanchi, a small town in the state of Madhya Pradesh, is the location of several Buddhist monuments dating from the third century BC to the twelfth century AD. The foundation of the hilltop temple complex was laid by the Mauryan emperor Ashoka (273-236 BC) when he built a total of eight stupas, one of which became known as the Great Stupa. The present Great Stupa (120 feet/37 meters wide and 54 feet/17 meters tall) is, however, not the original one. It encases an earlier stupa of about half its current dimensions that was built of large burnt bricks and mud.

This Ashokan Great Stupa was vandalized sometime in the second century BC, but was repaired and expanded during the later period of the Sunga Empire (85 BC–75 BC). At that time, the dome was flattened near the top and crowned by three superimposed parasols within a square railing. The dome was set on a high circular drum meant for circumambulation, which could be accessed via a double staircase. In addition to their renovation of the Great Stupa, the Sungas constructed the Second and Third stupas, as well as other religious buildings. 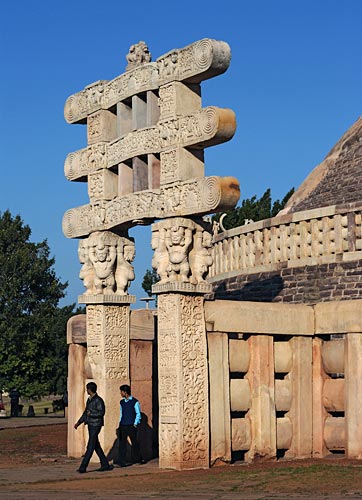 
Encircling the Great Stupa is a railing, with four exquisitely carved gateways, or toranas, each facing one of the four cardinal directions. It is believed that these gateways were carved during the Satavahana period sometime around 100 AD. These four gateways are the finest works of art at Sanchi and are among the finest examples of Buddhist art in India. They show scenes from the life of the Buddha and his previous incarnations as Bodhisattvas described in the Jataka tales. These scenes are integrated with everyday events that would be familiar to the onlookers and so make it easier for them to understand the Buddhist creed as relevant to their lives. On the stone carvings the Buddha was never depicted as a human figure. Instead the artists chose to represent him by certain attributes, such as the horse on which he left his father’s home, his footprints, or a canopy under the Bodhi Tree where he attained enlightenment. The human body was thought to be too confining for the Buddha.

Additional stupas and other Buddhist and Hindu religious structures were added over the following centuries until the 12th century CE. With the decline of Buddhism in India, the monuments of Sanchi went out of use, fell into a state of disrepair and were eventually completely forgotten. A British officer, General Taylor, discovered the site of Sanchi in the year 1818. Amateur archaeologists and treasure hunters ravaged the site until 1881, when proper restoration work was initiated. Between 1912 and 1919 the structures were restored to their present condition under the supervision of Sir John Marshall, and an archaeological museum was established. Today, around fifty monuments remain on the hill of Sanchi, including three stupas and several temples. Altogether, these monuments allow for the study of the genesis, efflorescence and decay of Buddhist art and architecture for a period of about thirteen hundred years, covering almost the whole range of Indian Buddhism.  The monuments have been listed among the UNESCO World Heritage Sites since 1989. 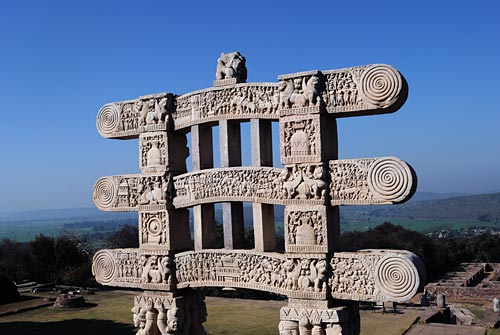 
Contrary to popular belief, the Great Stupa at Sanchi does not actually contain any relics of the Buddha, nor was Sanchi hallowed by any incident in the Buddha’s life. Hiuen Tsang, a Chinese pilgrim who toured India about 630 CE and meticulously recorded the details connected with Buddhist monuments, is silent about Sanchi. Stupa 3, however, a smaller stupa near the Great Stupa, did contain the relics of two of the foremost disciples of the Buddha, Sarriputa and Mahamogallena. These relics were found by Colonel Cunningham in 1851, carried to England in 1853 and finally returned to Sanchi in 1953.

What then is the purpose and meaning of the Great Stupa at Sanchi? A stupa is not a building in any traditional sense. Initially a burial or reliquary mound, it became a symbolic object, a symbol of the Buddha, a symbol of his final release from the cycle of birth and rebirth – the Parinirvana or the “Final Dying” to the world.

In a larger sense the stupa is also a cosmic symbol. Its hemispherical shape represents the world egg. Stupas commonly rest on a square pedestal and are carefully aligned with the four cardinal points of the compass. This is a recurrence of the symbolism of the dome whereby Earth supports Heaven and Heaven covers Earth. The axis of the world is always represented in the stupa, rising above its summit. A ritual circumambulatory path around the monument completes the cosmic symbolism. 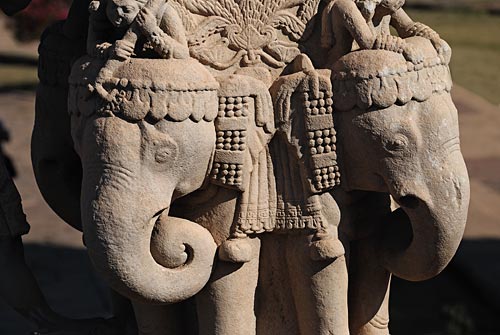