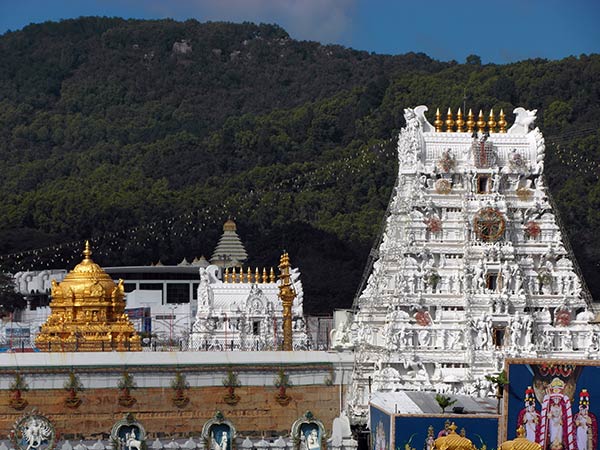 
Tirumala, a hill town located in the state of Andhra Pradesh, 573 kilometers (356 miles) southeast of the capital Hyderabad, is the most visited Hindu pilgrimage sites in all of India. Its nationwide fame is due to the magnificent temple of Sri Venkateswara, a deity also known as Shrimann Narayana, Maha Vishnu, Srinivasa and Balaji.

Tirumala is a combination of two words: Tiru means ‘holy’ or ‘sacred’ and Mala means ‘hills’ or ‘mountain’ in the Tamil language, therefore Tirumala translates as Holy Mountains. There are in fact seven peaks and the temple of Venkateswara is situated on the seventh peak called Venkatadri. Venkateswara means Lord of the Venkata Hill and he is also called the Lord of the Seven Hills. In Sanskrit the name Venkateswara can be split into three parts: Vem (Destroy), Kata (Sin), and Ishwara (Supreme Lord). Using this etymology, Venkateswara refers to the Supreme Lord who destroys sins.

According to the Hindu scriptures, Vishnu, out of love towards his devotees, incarnated as Venkateswara and appeared for the salvation and upliftment of humanity. He is considered the Supreme form of Vishnu in this age. It is said that Kubera, the Lord of Wealth, lent money to Venkateswara for his marriage with the goddess Padmavati (an incarnation of Lakshmi, the goddess of wealth and good fortune). In remembrance of this, the devotees donate money and gold to Venkateswara so that he can repay Lord Kubera.

The center of the temple complex is a monumental tower with a golden roof. Its inner temple houses the main deity, Lord Sri Venkateswara. The deity stands directly beneath a golden dome and is believed to be self-manifested because no human being is known to have installed it in the shrine. The statue wears a golden crown, which is embedded with a large emerald (supposedly the largest in the world) as well as many diamonds and other jewels. On special occasions, it is replaced with a diamond crown. Venkateswara has a dark complexion and four hands. In his two upper hands he holds a discus (a symbol of power) and a conch shell (a symbol of existence). With his lower hands extended downward he asks devotees to have faith and surrender to him for protection. Venkateswara's eyes are covered because it is said that his gaze is so intense it would scorch the universe.

The temple of Sri Venkateswara has acquired unique sanctity in Indian religious lore. The Sastras, Puranas and numerous other scriptures declare that one can attain enlightenment only by worshipping Venkateswara. All the great dynasties of rulers of the southern peninsula have paid homage to Venkateswara, including the Pallavas of Kanchipuram (9th century AD), the Cholas of Thanjavur (a century later), the Pandyas of Madurai, and the kings and chieftains of Vijayanagar (14th - 15th century AD). After the decline of the Vijayanagar dynasty, nobles and chieftains from all parts of the country continued to pay their homage and offer gifts to the temple.

The temple attracts approximately 80,000 to 100,000 pilgrims every day – forty million a year - and devotees will wait in long lines for ten or more hours in order to view the statue for less than two seconds. Devotees donate money to Venkateswara and the amounts received average $400,000 per day. Many devotees offer gold as a token of their love and these gold offering average 3000 kilograms (6500 pounds) per year. The annual income, estimated at 185 million dollars in 2008, runs charitable trusts, schools, hospitals and the feeding of the many millions of pilgrims visiting the shrine The Tirumala temple is believed to be the richest of all the temples in the world and the jewel studded statue to be the single most valuable object on the planet.

Many devotees have their heads shaved as an offering to Venkateswara. The amount of hair collected each day is over one ton. The hair is sold by the temple organization to international buyers for use as hair extensions and in cosmetics, bringing over $6 million to the temple's treasury each year.

The town celebrates most Vaishnava (Vishnu) festivals with great splendor, while the Brahmotsavam celebrated every year during September is the most important festival and receives millions of devotees over the short span of a week. Other major festivals include Vasanthotsavam (spring festival), conducted in March–April, and Rathasapthami (Magha Shuddha Saptami), celebrated in February, when Lord Venkateswara's deity is taken on procession around the temple chariots.

The Venkateswara temple is one of the three Archavathara Vishnu temples, the others being at Srirangam and Badrinath, and also one of the 108 Divya Desam Vishnu temples. Other important temples in the Tirumala region include Srikalahasti, Srinivasa Mangapuram, Sri Padmavati Devi Alayam, Govinda Raja Swami, Kodanda Rama Swami, Kapileswara Swami and Kalyana Venkateswara. 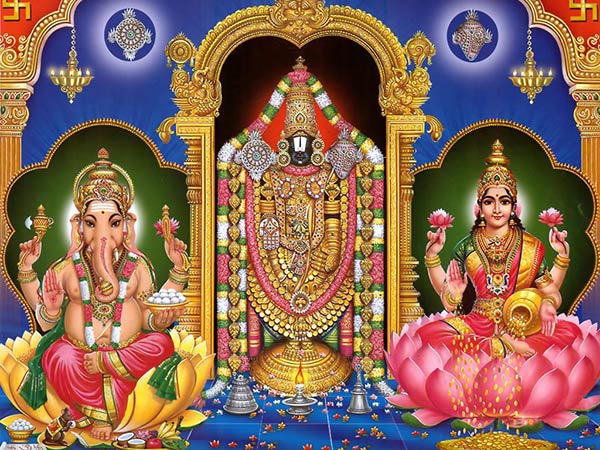