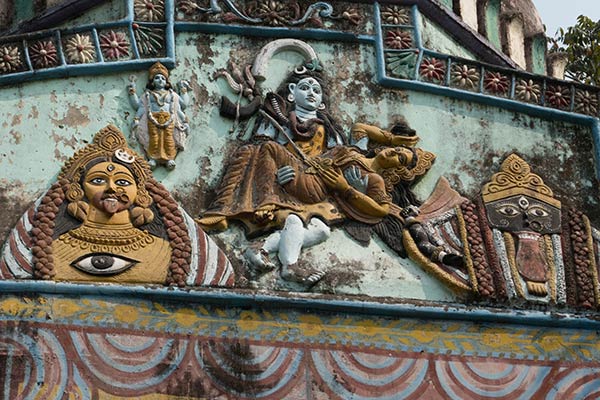 Shiva carrying Shakti during his Tandava dance through the universe (Enlarge)

Shakti was the daughter of King Daksa and Queen Prasuti. She was also the wife of Shiva, whom King Daksa disliked for being a rough ascetic and for marrying Shakti against his wishes. King Daksa once held a great ceremony, called a yagna, to which he invited neither his daughter nor son-in-law Shiva. Shakti was offended by this slight and attended the ceremony uninvited. Insulted by Daksa, she took her life by immolating herself in the ceremonial fire. On hearing this news, Shiva hastened to the house of Daksa, whom he decapitated, and then began to disrupt the ceremony and claim the body of his wife.

As the obstruction of the yagna ceremony would create havoc and severe ill effects on nature, the gods Brahma and Vishnu appealed to the grief-stricken Shiva, requesting that he permit the ceremony to be completed. Shiva complied and also affixed the head of the ram used in the ceremony to the decapitated body of Daksha. Returned to life, Daksha apologized to Shiva and begged for mercy from the Parabrahman (the Supreme Almighty who is formless) who informed him that Shiva was in fact a manifestation of Parabrahman. Daksha then became a great devotee of Shiva.

Still inconsolable at the loss of his beloved wife, however, Shiva placed her body on his shoulder and began the Tandava, a mad dance through the universe. In order to restrain Shiva and protect the universe from destruction Vishnu threw his discus (or shot arrows in some accounts) to dismember the body of Shakti limb by limb (other sources say he entered Sati's body by yoga and cut the corpse in to several pieces). When Shiva was thereby deprived of the body, he ceased his mad dance. The parts of Shakti's body (or her jewelry) fell from Shiva's shoulders to the earth and the places where they landed became the sites of the sacred Shakti Pitha shrines. For countless centuries these sites have been visited by women having ailments in certain parts of their bodies - each temple enshrining a particular part of Shakti's body is believed to have the miraculous capacity to heal that same part of a woman's body. At all the Shakti Pitha temples, the Goddess Shakti is also accompanied by her consort Lord Bhairava, a manifestation of Lord Shiva.

The geographical location of the Shakti Pitha temples is noteworthy. There is a considerably higher concentration of these temples in the eastern part of India, particularly the northeast. Around forty per cent of the temples are located in this region, which may perhaps be called the heart of the goddess cult in India. The history of the peopling of India suggests that the aboriginal population and their goddess cults moved further east following the Aryan invasion in the northwest starting in 1500 BCE, either being forcefully driven out or willingly migrating in search of safer places. Also notable is that almost all the Shakti Pitha temples are closely associated with natural objects; most of the shrines occupy either hill or mountain top locations or other elevated places.

The names and locations of the Shakti Pithas may be found on these Wikipedia and Temple Purohit pages. Readers interested in learning more about these places can consult books by Bagchi, Housden, Morinis, Sastri, and Sircar listed in the bibliography. Directions to the shrines may be found in the guidebook entitled India: A Practical Guide, by John Howley. 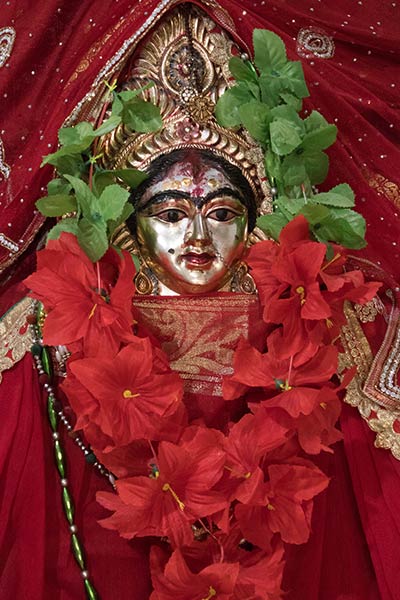