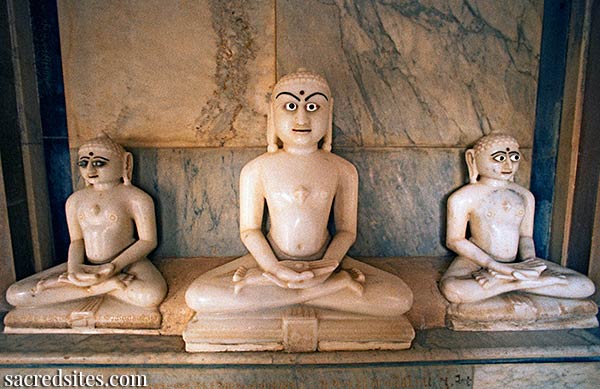 
While the majority of pilgrimage places in India are sacred to the followers of Hinduism, there are numerous holy sites of other religions such as Jainism, Buddhism and Islam. Jainism is a religion and philosophy native to India founded in about the 6th century BC by the sage Mahavira. Born in 599 BC near Patna in what is now Bihar state, Mahavira began the life of an ascetic at the age of twenty-eight. After years of hardship and meditation he attained enlightenment and thereafter taught for about thirty years before he died in 527 BC. An elder contemporary of the Buddha, he is referred to in early Buddhist writings as Nataputra.

Jainism, which does not espouse belief in a creator god, has as its ethical core the doctrine of Ahimsa, or non-injury to all living creatures, and as its religious ideal the perfection of human nature, to be achieved predominantly through monastic and ascetic life. Jainism teaches universal tolerance, and its attitude toward other religions is that of non-criticism. It is not competitive and has never cared for the spread of its faith. The Jain people and their temples are deeply peaceful.

According to Jain beliefs, their faith is eternal and has been revealed through the successive ages of the world by twenty-four Tirthankaras. The word Tirthankara is a title given to the (mostly mythical) enlightened sages of Jainism; it means 'ford maker' and indicates a being or deity who has bridged, or forded, the mundane and spiritual worlds and can thereby assist human beings in the same realization. Tirthankaras are similar to the Avatars of Hinduism in that their function is to instruct and inspire humankind while protecting the world from demonic forces. Like the 'tirthas' of the Hindu Avatars (see introduction to Sacred Places of India for more detail on the subject of Hindu tirthas), the Jain Tirthankaras have sanctified specific places on the earth by their birth, great miracles or attainment of enlightenment. The 'tirthas' of Jainism are spread all over India and have been divided into two classes. Those places where the Tirthankaras and other holy persons have attained Nirvana are called 'Siddha-kshetra'; and those which have attained importance because of temples, idols or different miracles are called 'Atisaya-kshetra'. The primary Siddha-kshetras of the Jains are the five sacred mountains of Shatrunajaya in Gujarat, Girnar in Saurashtra, Sametshikhara in eastern Bihar, Mt. Abu in Rajasthan, and Astapada, a mythical mountain of the center of the universe. Other important places of Jain pilgrimage are Parasnath, Champapuri, Pavapuri and Sammeda in Bihar; Sonagiri and the Udaigiri caves in Madhya Pradesh; and Mudabidri in Karnataka.

Shatrunajaya, meaning the 'Place of Victory', is considered the most holy of the Jain sacred mountains because nearly all of the Tirthankaras are believed to have attained nirvana while meditating atop the mountain. Rising nearly 2000 feet above the town of Palitana, the rounded peak is entirely capped with an enormous complex of 863 temples. While some of the temples are as old as the 11th century (the religious use of the site is far older), most date from the early 1500's; Muslim invaders of the 14th and 15th centuries had destroyed the earlier shrines.

Shatrunajaya is considered by many archaeologists and scholars of religious architecture to be amongst the most beautiful temples in the world. Within the ornately fashioned and impeccably maintained temples are found many hundreds of exquisitely sculpted marble statues of the twenty-four Tirthankaras. These statues are the supreme object of Jain veneration and, while they may be worshipped by some uneducated Jains, they are philosophically intended as objects for inspiration rather than worship. The Tirthankaras, as enlightened beings, are considered superior to mere gods and deities, and thus are viewed as examples for humans, inspiring each person on the long and arduous ascent to spiritual realization. Shatrunajaya is the scene of a great pilgrimage festival on the full moon of each Karttika (October-November). Groups of pilgrims from all over the country flock here, and part of the celebration consists of processions carrying huge pictures of the sacred mountain through the streets of Palitana. 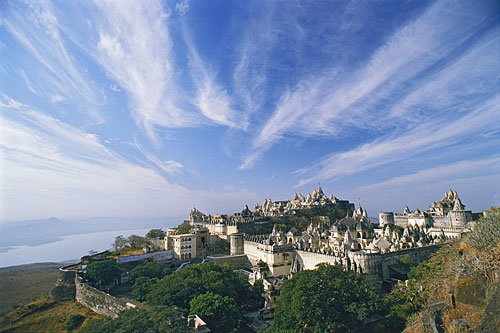 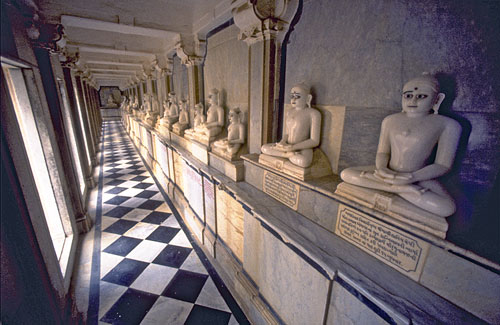