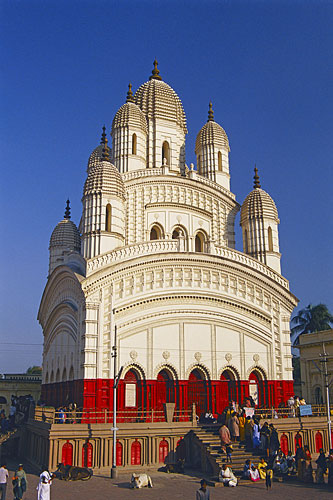 
In the year 1847, the wealthy widow Rani Rasmani prepared to make a pilgrimage to the sacred city of Banaras to express her devotions to the Divine Mother. In those days there were no railway lines between Calcutta and Banaras and it was more comfortable for rich persons to make the journey by boat rather than by road. The convoy of Rani Rasmani consisted of twenty-four boats carrying relatives, servants, and supplies. But the night before the pilgrimage began, the Divine Mother, in the form of the goddess Kali, intervened. Appearing to the Rani in a dream, she said, "There is not need to go to Banaras. Install my statue in a beautiful temple on the banks of the Ganges River and arrange for my worship there. Then I shall manifest myself in the image and accept worship at that place." Profoundly affected by the dream, the Rani immediately looked for and purchased land, and promptly began construction of the temple. The large temple complex, built between 1847 and 1855, had as its centerpiece a shrine of the goddess Kali, and there were also temples dedicated to the deities Shiva and Radha-Krishna. A scholarly, elderly sage was chosen as the head priest and the temple was consecrated in 1855. Within the year the priest died and his responsibilities passed to his younger brother, Ramakrishna, who over the next thirty years would bring great fame to the Dakshineswar temple.

Ramakrishna, however, did not serve for long as the temple's head priest. From the first days of his service in the shrine of the goddess Kali, he was filled with a rare form of the love of God known in Hinduism as maha-bhava. Worshipping in front of the statue of Kali, Ramakrishna would be overcome with such ecstatic love for the deity that he would fall to the ground immersed in spiritual trance and lose all consciousness of the external world. These experiences of God-intoxication became so frequent that he was relieved of his duties as temple priest but allowed to continue living within the temple compound. During the next twelve years Ramakrishna would journey ever deeper into this passionate and absolute love of the divine. His practice was to express such intense devotion to particular deities that they would physically manifest to him and then merge into his being. The various forms of god and goddess such as Shiva, Kali, Radha-Krishna, Sita-Rama and Christ appeared to him and his fame as an avatar, or divine incarnation, rapidly spread throughout India. Ramakrishna died in 1886 at the age of fifty yet his life, his intense spiritual practices, and the temple of Kali where many of his ecstatic trances occurred continued to attract pilgrims from all over India and the world. Even though Ramakrishna grew up and lived within the domain of Hinduism, his experience of the divine went far beyond the bounds of that, or any other, religion. Ramakrishna fully realized the infinite and all-inclusive nature of the divine. He was a conduit for divinity into the human world and the presence of that divinity may still be experienced at the Kali temple of Dakshineswar.