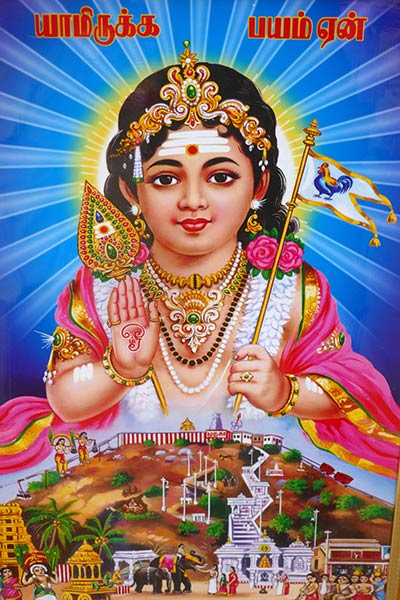 Painting of Muruga at Temple of Palni, Tamil Nadu (Enlarge)

In the southern Indian state of Tamil Nadu, the 'Six Homes of Lord Muruga' are among the most colorful, exotic and vital pilgrimage sites in the world. Muruga, or Murukan, is the Tamil name for a god who is also known as Skanda, Subrahmanya, Kumara and Kartikeya; he is an amalgamation of two deities, deriving from ancient indigenous Tamil culture and external Vedic influences. In Epic times, myths of the Mahabharata and Ramayana describe Skanda as a celestial warrior-hero born of the seed of the god Rudra for the purpose of defeating troublesome demons known as Asuras. This Skanda of the Epics, when he is brought into Tamil Nadu, becomes linked with Murukan, a name originally given to a god of the Kurincis culture. The Kurincis, a folk people living in the forested hills, had a legendary love of dance, play and nature, and the name of their god Murukan means 'beautiful, fragrant, young and vibrant one'. References in Tamil poetry of the 1st and 2nd centuries AD describe Murukan as a lord of the hills and hunt, a controller of epidemics and malevolent forces, a deity who is fondly worshipped with the frenzied dance of beautifully adorned damsels. He is also a philosopher-teacher who is accepted as the inspiration and author of Tamil language and literature.

From a legendary time early in the 1st millenium BC, Murukan is already associated with six sacred hills, the myth of each site suggesting how he manifested himself there. Explanations for the number six are given by reference to the god's six qualities of felicity, fullness, immortal youth, limitless energy, protection from evil, and spiritual splendor. He is also associated with the six directions of east, west, north, south, up and down, as well the five primordial elements and the whole. An excellent and highly readable discussion of Muruga and his worship in Tamil Nadu is given in an article by Professor Fred Clothey in the Journal of the Academy of Religions (see bibliography); much of the following information on the six sites was taken from that article.

The Murukan devotees are unanimous in stating the existence of six sites yet only five of these sites are accepted as authentic without dispute. The first is Palani, some twenty miles from Dindigul Junction. At this place Muruga and his brother Ganesh were tested by their parents Shiva and Parvati. Whichever of the sons could most quickly travel around the cosmos would be given the gift of a rare fruit. Muruga, the younger and brasher, set off at a rapid pace to circle the world; Ganesh, the wiser, merely walked around his father Shiva. Returning from his arduous journey Muruga was humbled and, retreating to the the hill of Palani, he spent many years as an ascetic monk meditating and seeking wisdom. Palani is also associated with healing; this tradition being nurtured by local legends about bhogars or mystical alchemists who in a prehistoric era constructed the main icon of the Palani temple from a combination of nine different medicinal and immortalizing substances. Neither the age of this still existing icon is known nor the proportion of its ingrediants. Any substance that comes into contact with the icon is believed to acquire miraculous healing powers, and countless are the number of healings that have occurred within the temple.

The seaside shrine of Tiruchendur is the second major site. Its name means 'village of the sacred battle' and it is here where the young Muruga conquered the troublesome demon named Surapadman. When Muruga finally found the demon's dwelling place in a tree, he split the tree with his lance and the demon, rather than being killed, was turned into a radiantly lovely peacock that became the vehicle of Muruga. A fascinating festival celebrating Muruga's victory over the demonic forces is held at the Tiruchendur temple each October/November.

The third site is Tiruttani, some seventy-five miles northwest of Madras city. On this hill Muruga came for meditation and purification after his battle with the demons. It is where he ruled his domain from, where he conducted his courtship of a forest goddess, and where he taught as a philosopher. Tituttani, meaning 'blissful repose' is the scene of numerous bhajanais, or musical festivals, in which large numbers of pilgrims come to worship with devotional singing and dancing.

Tirupparankunram, a hill five miles southwest of Madurai, is the fourth pilgrimage site of Muruga. A cave temple dedicated to the element of earth and mentioned in various classical Tamil texts as the 'Southern Himalaya' where the gods assemble, Tirupparankunram is also mentioned in legend as 'the place where the sun and moon abide'. Muruga was married to Devasena upon the hill and for many centuries the Tamil people have considered it the most auspicious place for their own marriages, especially during the time of the Pankuni Uttiram, the festival of marriage held in late March. Besides the fantastic temple to Muruga on the hill, there is also a Muslim shrine dedicated to 'Sekunder', who is associated with Murukan by the Muslim pilgrims.

The fifth site, Swamimalai, meaning 'Mountain of the Lord' is near the city of Kunbakonam in Tanjavur district. It is here that the child Muruga taught his father Shiva the meaning of the sacred syllable 'OM'. The icon at Swamimalai depicts the boy Muruga perched on his father's shoulder whispering into his ear. The temple gopuram (great tower) is emblazoned with a neon 'OM'.

Regarding the identity of the sixth major site, there is no consensus among scholars and many local temples are ascribed the distinction. During the author's visit to the five shrines listed above, numerous temple priests were interviewed and asked for their opinion on the matter. The answer most often given was the shrine of Paramthirsolai, twelve miles east of Madurai (at the top of the hill of Alagar, above the Alagarcoil Vishnu temple). While this temple is not as large or bustling as the other five recognized shrines, it is just as incredible to visit, and for the author had the most mysterious atmosphere. 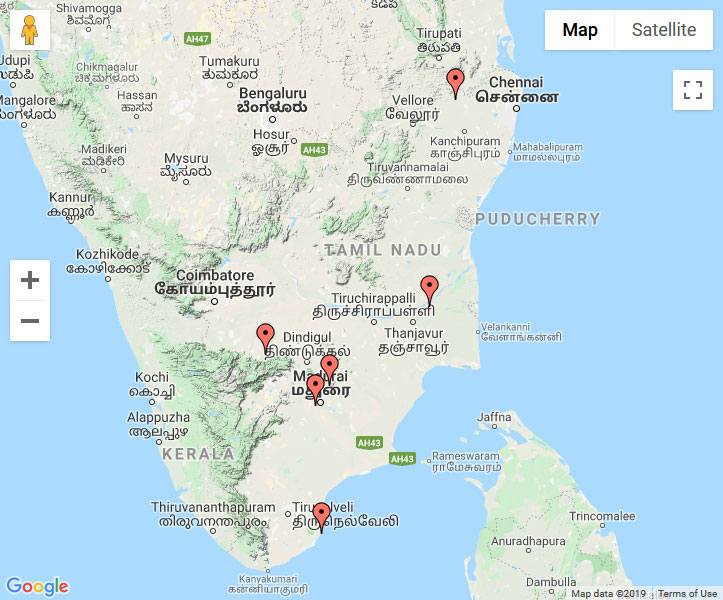