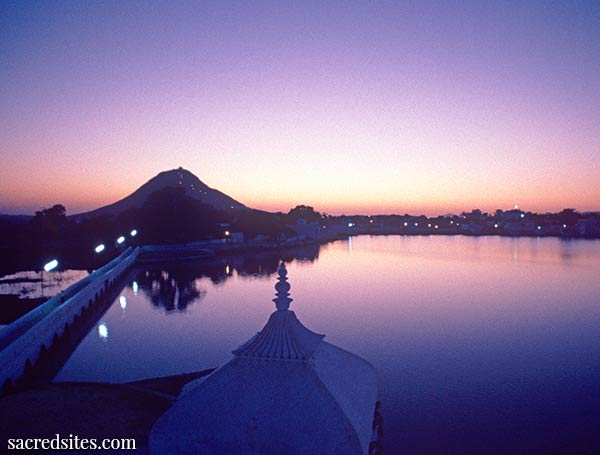 Pushkar Lake at Sunset, Hill of Saraswati in distance

The description of pilgrimage places in the Tirtha-Yatra section of India's great epic, the Mahabharata, suggests a grand tour of the entire country. The pilgrimage begins in Pushkar, sacred to the god Brahma, and continues in a rambling clockwise direction throughout the subcontinent, ending in Prayaga (modern day Allahabad). As indicated by Pushkar's position as the starting point of the grand pilgrimage, the worship of Brahma was considered highly important at the end of the 1st millennium BC.

The common assumption of there being only one temple to Brahma is untrue. There are at least four major temples of the god still in use today. These are at Pushkar in Ajmer, Rajasthan; Dudhai in the state of Madhya Pradesh; Khed Brahma in Kerala; and Kodakkal in the Malabar region of Kerala-Karnataka. Other deities have long eclipsed the cult of Brahma, and this waning of importance may be attributed to the fact that the function of Brahma - creating the world - has been completed, while Vishnu (the preserver) and Shiva (the destroyer) still have relevance to the continuing order of the universe.

Mythological literature describes Brahma as having sprung from the lotus originating in the navel of Vishnu. Brahma then becomes the source of all creation, the seed from which issues all space, time and causation. His consort Saraswati was manifested out of him and from their union were born all the creatures of the world. He is the inventor of theatrical art, and music and dance were revealed by him. He is sometimes depicted with four heads representing the four Vedas and the four Yugas (great epochs of time), and other times as Visvakarma, the divine architect of the universe. Saraswati is the wife of Brahma. Literally her name means 'the flowing one'. In the Rig Veda she represents a river deity and is connected with fertility and purification. She is considered the personification of all knowledge - arts, sciences, crafts and skills. She is the goddess of the creative impulse, the source of music, beauty and eloquence. Artists, writers and other individuals involved in creative endeavors have for millennia come on pilgrimage to Pushkar to request the inspiration of Brahma and Saraswati. According to the theory that shrine myths are often metaphorical expressions of the specific power of a pilgrimage place, the lake, hill and area of Pushkar have a spirit or presence that awakens and stimulates the human capacity of creativity.

There are five principal temples in Pushkar, all of relatively recent construction since the earlier buildings were destroyed by the Mugal emperor Aurangzeb in the late 17th century. Numerous bathing areas, known as ghats, surround the lake and pilgrims immerse themselves in the holy waters for a cleansing of both body and soul. During most of the year Pushkar is a small, quiet town. Each November, however, more than 200,000 people arrive, along with 50,000 cattle, for several days of pilgrimage, horse dealing, camel racing and colorful festivities. 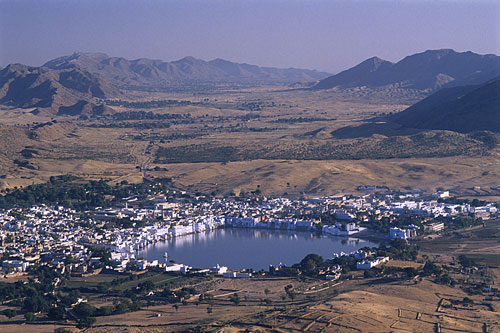 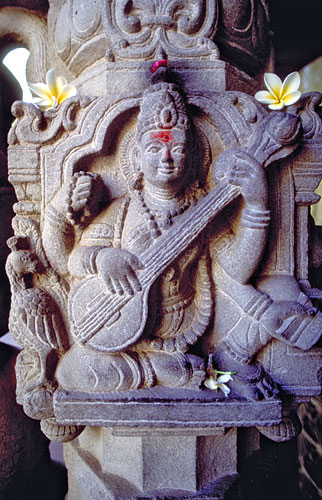