Temples of Rameshvaram and Badrinath 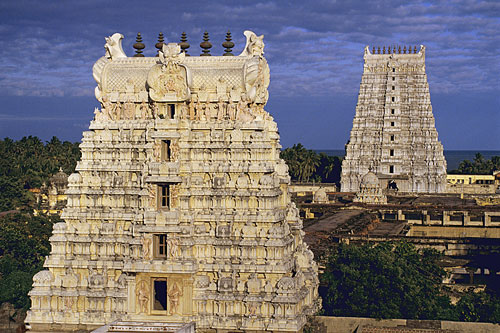 
As discussed in the section, Introduction to the Pilgrimage Places of India, there are several ways in which pilgrimage sites are categorized in Hinduism. One of these concerns the four Dhamas, or the 'abodes' of the gods at the four directional compass points of India. While no specific legend explains the grouping of these four sites together, they were each highly regarded by the time of the Mahabharata (500 BC), they came to be listed together by the time of the early Puranas (4th century AD), and were given further emphasis in the 9th century when the great sage and scholar Sri Adi Sankara established monastic centers at them. The four Dhamas are: in the East, the Krishna temple of Jagannath in Puri, Orissa; in the North, the Vishnu temple in Badrinath, Uttar Pradesh; in the South, the Shiva temple of Rameshvaram in Tamil Nadu; in the West, the Krishna temple of Dwarka in Gujarat.

The temple at Rameshvaram, besides being considered a Dhama, is also one of the twelve sacred Jyotir Linga sites. These sites, located throughout the sub-continent of India, are where the god Shiva is said to have manifested as a towering column of fire. Among India's most ancient temples sites, they enshrine small pillars of stone, called lingas, which are worshipped as containing the creative power of Shiva. Unlike the other eleven Jyotir Linga sites, Rameshvaram has two sacred Lingas instead of just one. A legend from one of India's great epics, the Ramayana, explains this unique condition. A demon named Ravana had stolen Sita, the wife of Lord Rama. Following a terrific battle on the island of Lanka (modern day Ceylon or Sri Lanka) in which Rama killed the demon Ravana, Sita and Rama returned to India. At the site where they landed, Rama decided to install a Shiva Lingam to absolve him of the sin of destroying Ravana who, besides being a demon, was also a member of the Brahmin caste. Lord Rama sent his devotee, the monkey deity Hanuman, to Mt. Kailash to get a lingam from the god Shiva. Hanuman's journey took longer than expected, however, and as the auspicious time of worship neared, Sita quickly fashioned a lingam out of sand. When Hanuman finally arrived with a stone lingam from Kailash he was disappointed to find another lingam already installed. To please Hanuman, Rama installed the stone lingam beside the sand one and ordered that all worship should henceforth be given first to the Visvalingam brought by Hanuman, and only then to the Ramalinga made by Sita.

The enormous temple of the two Shiva Lingams lies near the seashore at the tip of India. Besides the 100-foot tall gopuram towers shown in the photograph, the temple is renowned for its magnificent corridors with massive stone pillars. Decorating the sides of the gopuram towers and throughout the interior of the temple are thousands of exquisite sculptures depicting mythic events from the Ramayana. There are also twenty-two sacred bathing pools within the temple complex. Fully clothed pilgrims immerse themselves in each of these pools - known for their miraculous healing cures - before praying at the two Shiva Lingams. Perhaps the finest example of Dravidian architecture in south India, the present temple dates from the 12th century and is the composite work of several different kings. More than ten thousand pilgrims pass through the temple each day, making Rameshvaram one of the most visited and vital sacred sites in all of Asia. 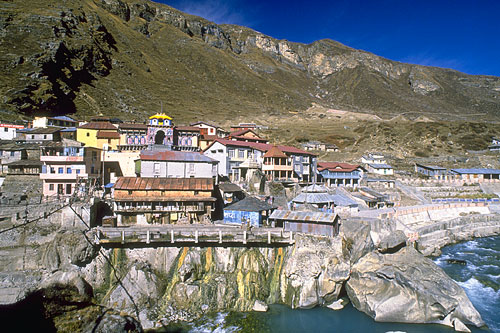 Town and temple complex of Badrinath

The holy Dhama temple of Badrinath, far north from Rameshvaram's seaside location, is in the state of Uttar Pradesh, in the Uttarkhand region of the Himalaya mountains. Perched above the Alaknanda River, a headstream of the Ganges, the temple's elevation is 10,248 feet (3050meters). Because of the extreme cold of the high mountain winter the shrine is only open in the summer months. When the first snows fall the sacred statue of Vishnu (seated in the Yogic padmasana pose) is clothed in a thick woolen blanket, the temple is closed and locked, and the priests move down the mountain to the town of Joshimath for the winter. Badrinath has been a well known pilgrimage site for over 2000 years and the Buddhist architectural influence in the shrine shows that Badrinath has also been venerated by Buddhists since very early times. Immediately adjacent to the shrine is the hot spring pool of Taptakund in which pilgrims take a dip before worshipping Sri Badrinatha. 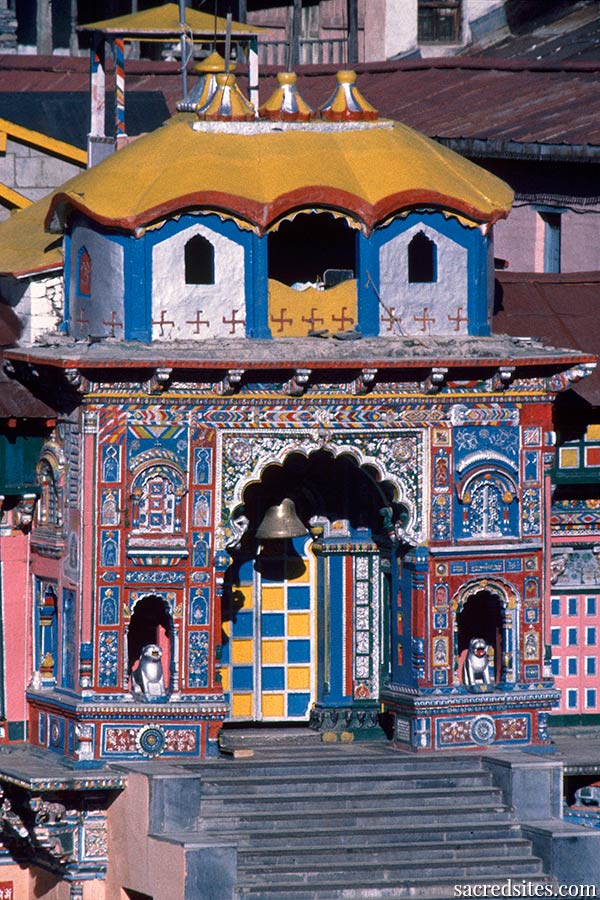 The Holy Dhama Temple of Badrinath