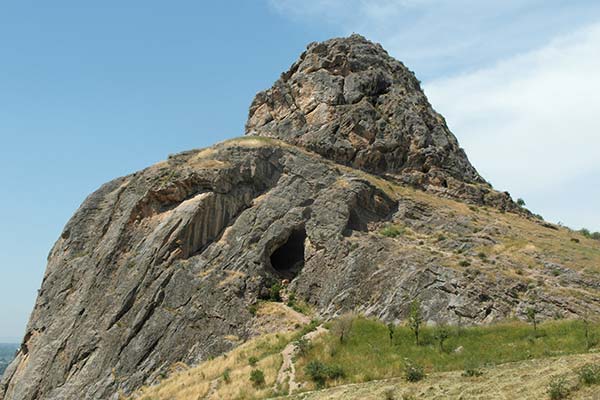 Sacred mountain of Sulaiman Too, Osh

Sulayman Mountain (also known as Taht-I-Suleiman,Sulayman Rock or Sulayman Throne) is the only Unesco World Heritage Site in the country of Kyrgyzstan. It is located in the city of Osh and was once a major place of Muslim and pre-Muslim pilgrimage. The rock rises abruptly from the surrounding plains of the Fergana Valley and is a popular place among locals and visitors, with a splendid view.

Sulayman (Solomon) is a prophet in the Qur'an, and the mountain contains a shrine that supposedly marks his grave. Women who ascend to the shrine on top and crawl though an opening across the holy rock will, according to legend, give birth to healthy children. The trees and bushes on the mountain are draped with numerous "prayer flags", small pieces of cloth that are tied to them.

According to the Unesco, the mountain is "the most complete example of a sacred mountain anywhere in Central Asia, worshipped over several millennia". The site is still a popular place for local Muslims, with stairs leading up to the highest peak where there stands a small mosque originally built by Babur (1483-1530, the founder of the Mughal dynasty) in 1510. Much of the mosque had been reconstructed in the late 20th century.

The rock also contains the National Historical and Archaeological Museum Complex Sulayman that were built during the Soviet era, showing archaeological findings from the area and its history. 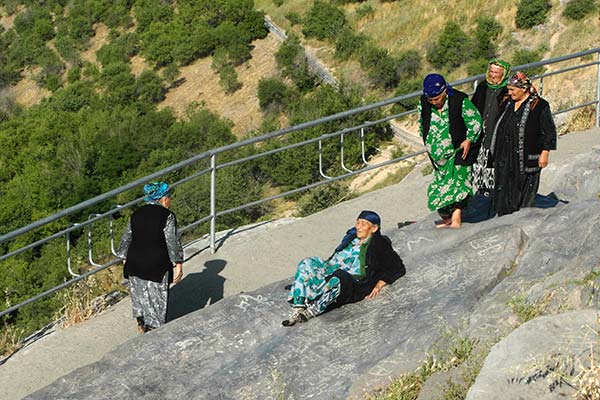 There is an Open Air Museum, sometimes referred as a Stone Garden, which covers some 42 hectares and contains a number of prehistoric monumental structures (stone circles, tombs, the remains of a boundary stone wall, and stone carvings of human heads known as balbals) and Petroglyphs (dating from the 2nd millennium BC up to the 6th century AD).

The stones have plaques giving some information (a short description and a date), and there are several routes marked with arrows around the “stone garden”. The shortest route in the Stone Garden takes 20-30 minutes. But there is a longer route to the upper side of the museum, which enables visitors to explore a collection of stone balbals, stone inscriptions, stone circles and … a spectacular panorama of the Cholpon-Ata bay of Lake Issyk-Kul.

The best time to visit is early morning or late evening, when all the drawings are clearly seen and one can feel the atmosphere of ancient times. It is thought that the site was once a gigantic open-air temple, where ancient people worshipped heavenly bodies – especially the sun – and perhaps other gods. The stones vary in size from about 30 cm to 3 meters.

Many of the drawings are examples of the Saka-Skythian animal style of art. There are figures of hunters and what appear to be tame snow leopards during a hunt. One appears to depict hunting leopards in motion and is the only one of this kind in Central Asia. Most of the stones face Southwest and Southeast and it is thought that they are connected to sun worship. It is thought that one of the purposes behind the stone circles was to serve as astronomical instruments.  The Sun (solar) sign, often accompanied by chariots, are drawn on rocks along with images of animals and people, (such as hunters).

There are images of deer (interestingly the image of Mother-deer seems to have been wide-spread in the Altai, Semirechye and Southern Siberia). One of the biggest Kyrgyz tribes, who worshipped Mother-deer, was called Bugu (” Red Deer ”) – although the Kyrgyz, themselves, may have migrated to the region long after these rock paintings were executed.

The art of stone inscriptions gradually disappeared with the spread of Islam, which restricted images of animals and human beings, to Central Asia. However many of the forms used in these petroglyphs are still with us – they form the basis of patterns, showing different parts of animals (horns, wings, claws) are used in Kyrgyz carpets and other forms of traditional arts and crafts. There are other collections of petroglyphs located in the foothills of the Kungei Ala-Too mountain range, which stretches along the entire northern length of the lake, between Kyrgyzstan and Kazakhstan – but the Stone Garden represents the most easily accessible and preserved site.

Glaciers and streams deposited some of the biggest stones here thousands of years ago. The petroglyphs were carved (using metal and stone implements) and painted on them and have been burnt black and brown in the sunlight during intervening years.

Recent attempts to preserve the drawings have, unfortunately, been surrounded in controversy as, it is claimed, some of the chemical used may actually damage these historical artifacts.
http://www.advantour.com/kyrgyzstan/cholpon-ata-petroglyphs.htm 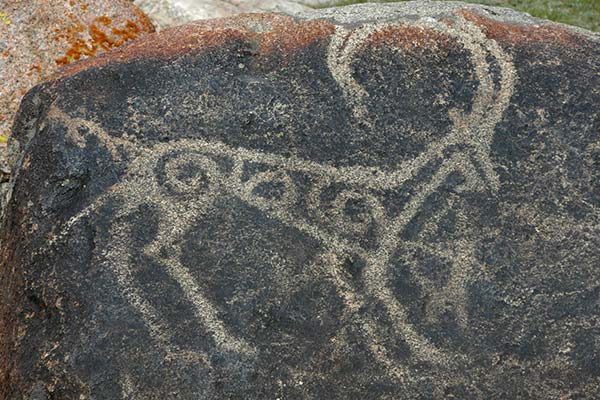 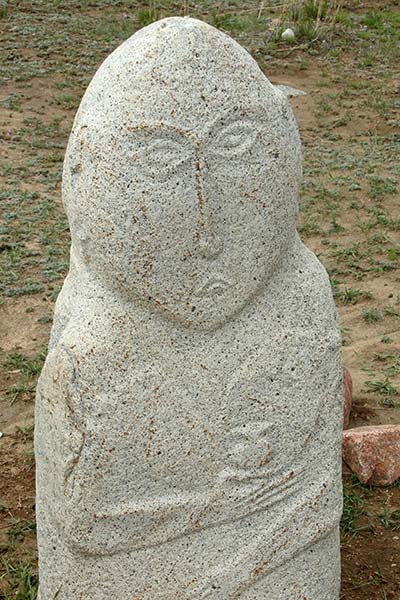 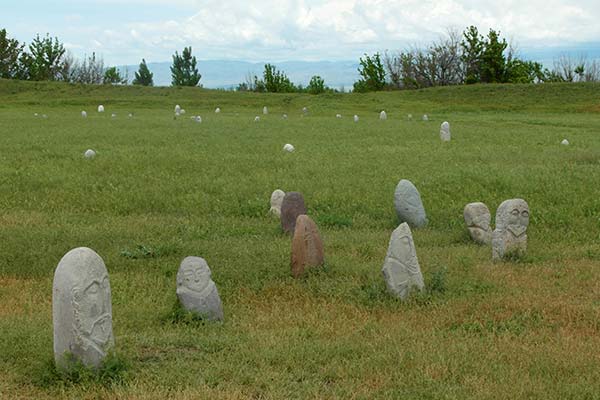 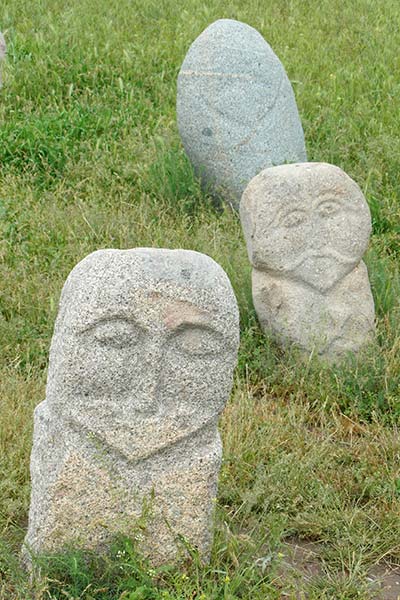 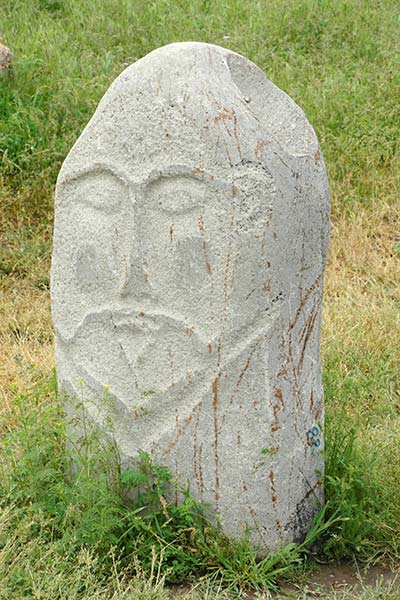 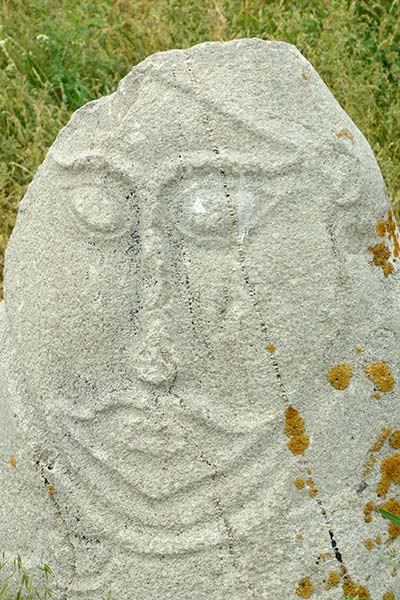 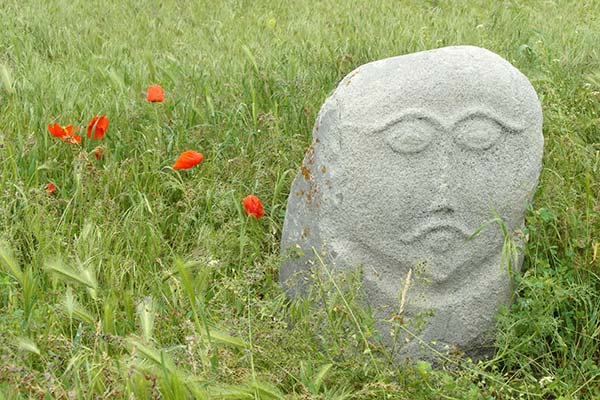