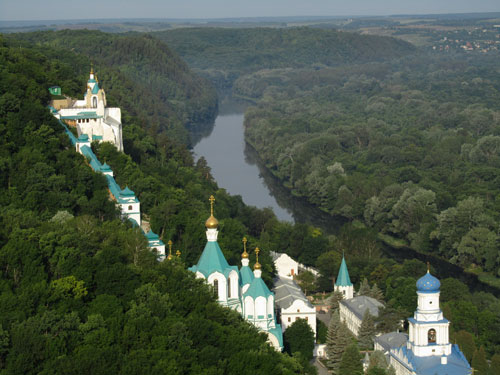 The Svyatogorsk Lavra or Svyatogorsk Cave Monastery is a historic Orthodox Christian monastery near the city of Svyatogorsk in the Donetsk province of eastern Ukraine. The monastery is located on the right bank of the Seversky Donets River. The name comes from the hill on which it sits - Svyatogorsk or Holy Hill. 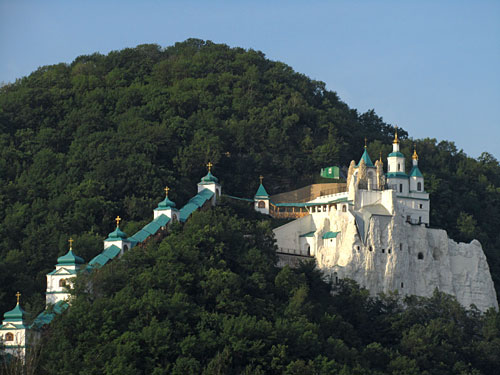 In 1787, the government of Catherine II paid for the restoration of the monastery. In 1844, it was once again restored, paid for by monetary donations from Aleksander Mikhailovich Potemkin and his wife Tatiana Borisovna. During the next seventy years until 1914, the monastery was one of the most important monasteries of the Russian Empire. Before World War I, approximately 600 monks inhabited the monastery. During the 1930s, it was destroyed by the Soviets, along with other numerous religious attractions throughout the Soviet Union. 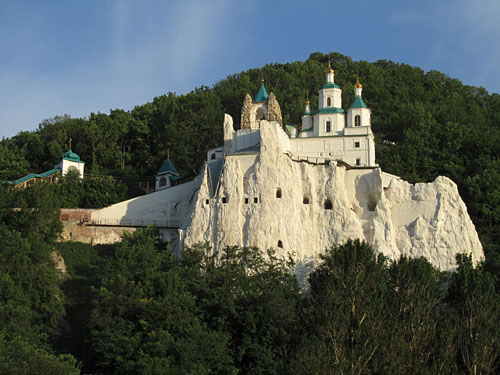 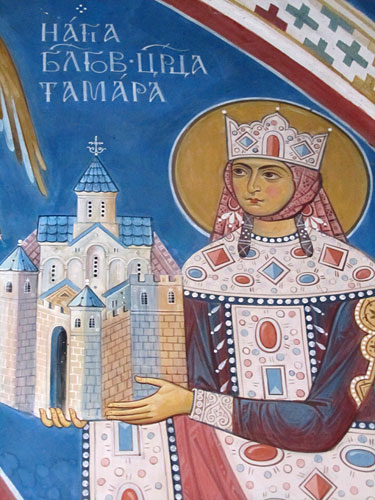 The Kiev Pechersk Lavra is a major Orthodox monastery located in Kiev, Ukraine, also referred to as the Monastery of the Kiev Caves. Founded in 1051 AD, during the times of Kievan Rus' (a medieval state in Europe, from the late 9th to the mid 13th century), the monastery has remained a major center of Orthodox Christianity in the Slavic world.

The monk Anthony is credited with founding the monastery when he settled in one of the caves that are now part of the Far Caves (also called the Caves of Theodosius). This occurred most probably in the year 1051, which is the traditional date for the foundation of the Kiev-Pechersk Monastery. As the community grew to twelve monks new caves were excavated. Among those who joined Anthony in the early years were Theodosius and Barlaam. In 1057, Anthony, who desired a life of seclusion, named Barlaam as the first abbot and withdrew from the community to new cave in a hill that today is part of the Near Caves (also called the Caves of Anthony).

During the early times when Theodosius was abbot (1062-1074), a wooden structure was built over the Far Caves and the monks, whose number was reaching one hundred, moved out of the caves. As the monastery grew the need for rules that would govern the life of the community was recognized. Theodosius decided to use the rules of the Studion Monastery in Constantinople.

The Monastery of the Kiev Caves was supported generously by the princes of Kiev, who donated not only money but land and buildings as well. Also, many of the educated men of the area became monks at the monastery as it became the largest religious and cultural center of Kievan Rus'. Of these monks twenty became bishops during the twelfth and thirteenth centuries.

In the mid 1070s the center of the monastery began to move to the area of the present Upper Lavra with the building of the Dormition Cathedral. In time the Near and Far Caves became places of seclusion and burial for the monks. In 1073, Anthony became the first burial in the Near Caves, followed in 1074 with the burial of Theodosius in the Far Caves. 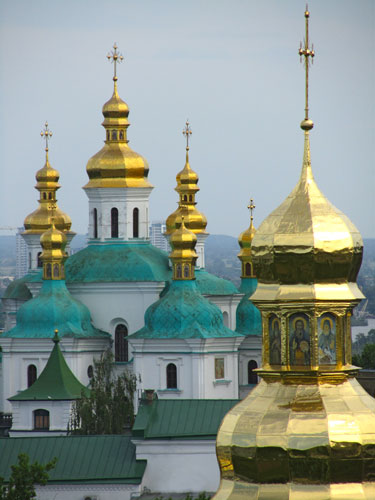 During the ensuing years the monastery was raided several times. Significant raids happened in 1096, 1169 and 1203. In 1240, the invading hordes of the Tatars came through Kiev, destroying the city and the monastery. During the times of Tatar occupation the monks moved into the caves, to remain there for a long time. After each raid the churches and buildings would be replaced and the system of underground caves and catacombs would be expanded. In 1470 the monastery was rebuilt again by Prince Semen Olelkovich, but was once again destroyed by Tatars in 1482.

Following the Union of Brest-Litovsk in 1596, those who supported the union and became Greek Catholics made an effort to gain control of the lavra, but the Orthodox prevailed and retained control.

A major fire in 1718 severely damaged the monastery and the main church, library and archives were destroyed. Restoration of this damage took ten years. In 1720, Peter I’s government prohibited printing of new books and imposed censorship on all publications from the monastery. This severely limited the monastery’s cultural influence.

By this time, the lavra was large and had acquired much wealth. The heart of the monastery remained the two underground labyrinths of tunnels, cells, and catacombs, from which the name of the monastery is derived and in which monks lived and were buried. But, the extent of the lavra grew beyond that. It owned three cities, seven towns, some 200 villages and hamlets, and about 70.000 serfs. This ended in 1786 when the Russian government secularized the property and made the lavra dependent upon the state. 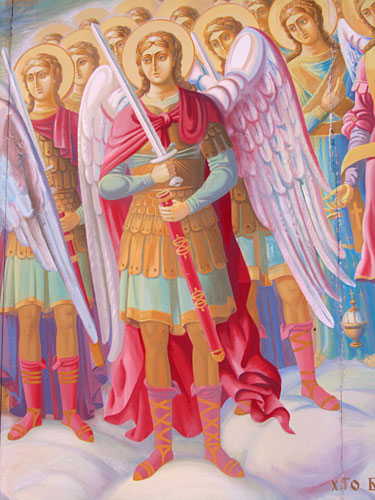 In the early twentieth century, before the Bolsheviks' assumption of power, Kiev-Pechersk Lavra was the residence of over one thousand monks. It was one of the most famous centers of religious life in the Orthodox world, visited each year by hundreds of thousands of pilgrims. The monastery was renowned for the relics of many saintly monks. This changed after the Soviets assumed control of the government in late 1917.

Changes by the Soviet authorities began in 1921. Initially, the authorities confiscated the relics and historical and artistic objects that belonged to the monastery. Buildings were converted to commercial and other uses. Many of the monastery's monuments were combined into a museum, the Lavra Museum of Religious Cults and Way of Life, which also contained collections from other museums in Kiev. After closing down the monastery completely in 1926, the Soviet government first turned the grounds into a museum preserve, the All-Ukrainian Museum Quarter, that consisted of a number of museums which emphasized anti-religious propaganda, and included archives, libraries, and workshops before closing the Quarter in 1934 and transferring the collections to new museums in Kiev. The Soviet authorities removed all the bells during the period 1931 to 1932.

During World War II the Soviet army mined the Dormition Cathedral before the advancing Nazi forces. The explosives were then detonated after the Nazi forces had occupied Kiev on November 3, 1941 severely damaging the cathedral. After the war the monastery grounds were restored and renamed the Kievan Cave Historical-Cultural Preserve, which housed a number of museums and institutions. Also, a functioning monastery of about one hundred monks was allowed to operate until 1961.

As the atheistic times began to wane in the 1980s, the Soviet government transferred in 1988 the area of the Lower Lavra, with the Far Caves, to the possession of the Ukrainian Church of Russia in commemoration of the one thousandth anniversary of the Baptism of Rus'. With the return of the Lavra to the Church the monastic and spiritual life was slowly restored. During 1998 to 2000 the city of Kiev rebuilt the Dormition Cathedral and returned it to the Church. As new monks have joined elderly monks who have returned to the Lavra, the cycle of services has been re-established, building on the primary duty of the monk of never ceasing prayer. 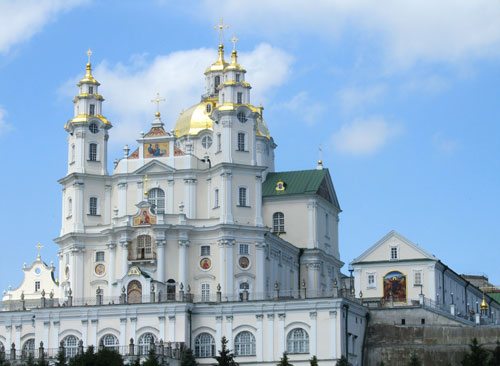 Pochayiv Lavra has for centuries been the spiritual and ideological center of various Orthodox denominations in Western Ukraine. The monastery is situated atop a 60-meter hill in the town of Pochayiv, 18 kilometers southwest of the town of Kremenets in the province of Ternopil.

The first record of the monastery dates to 1527, although a local tradition claims that several monks, either from the Monastery of the Caves in Kiev or from Mt. Athos in Greece, established it three centuries earlier during the Mongol invasion. The legend tells that the Theotokos, the Virgin Mary, appeared to the monks in the shape of a column of fire, leaving her footprint in the rock she stood upon. This imprint came to be revered by the local population and monks for the curative, medicinal properties of the water that issued from it. 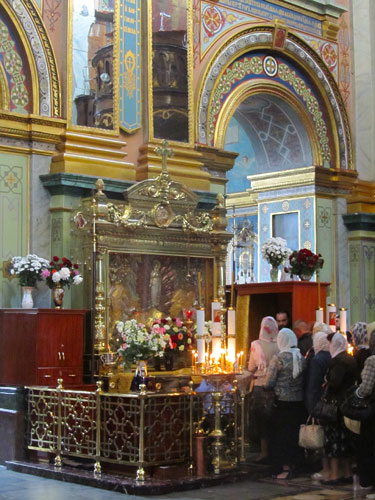 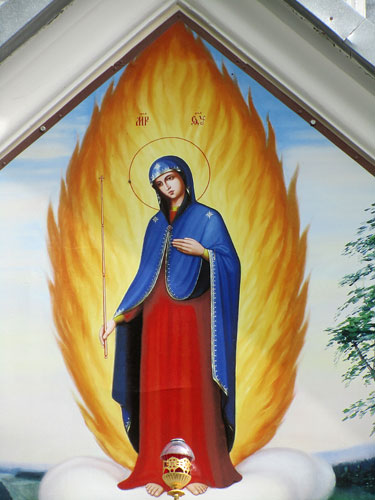 
In the 16th century, the abbey was prosperous enough to commission a stone cathedral and host an annual pilgrimage fair. Its standing was further augmented in 1597, when a noble lady, Anna Hojska, gave to the monastery her extensive lands and a miracle-working icon of the Theotokos. This image, traditionally known as Our Lady of Pochayiv, had been given to Anna by a Bulgarian bishop, and it helped to cure her brother from blindness.

During the Zbarazh War of 1675, the cloister was besieged by the Turkish Army, who reputedly fled upon seeing the apparition of the Theotokos accompanied with angels and St Job. Numerous Turkish Muslims that witnessed the event during the siege converted to Christianity afterward. One of the monastery chapels commemorates this event. 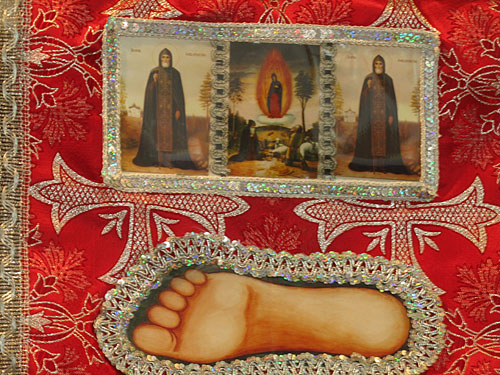 The Dormition Cathedral, constructed between 1771 and 1783, dominates the lavra. It contains the two most important shrines of Pochayiv - the footprint and the icon of the Theotokos, as well as the tomb of Nicholas Potocki. The cave churches of St Job and of Saints Anthony and Theodosius are situated for the most part beneath the ground. Their construction started in 1774 and was carried on in several stages, the last in 1860.

In 1831, the Russian government gave the monastery to the Russian Orthodox church and also raised its status to that of a lavra. In the late 19th century an icon painting workshop and a historical museum were established, and many buildings were rebuilt or expanded. Before the Revolution of 1917, the Pochaiv Monastery was a popular destination for religious pilgrims, tens of thousands of whom came to celebrate the feasts of the Dormition (August 28) and of Saint Yov Zalizo (September 10). The monastery lost its estates, falling victim to the antireligious policies of the Soviet regime. The number of monks declined sharply, from 200 in 1939 to 74 in 1959 and approx 12 in 1970. Nonetheless, efforts by the Soviet authorities to close the monastery outright in 1964 were met by protests of local Ukrainians and of the international community. The monastery remained open, but many of its artifacts were confiscated and housed in the Pochaiv Museum of Atheism, located at the monastery. Since the fall of the Soviet Union, the monastery is visited by tens of thousands of pilgrims each year. 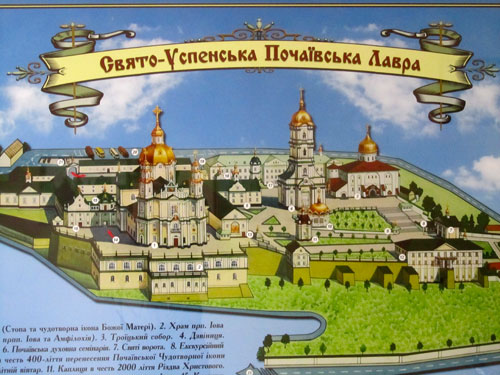 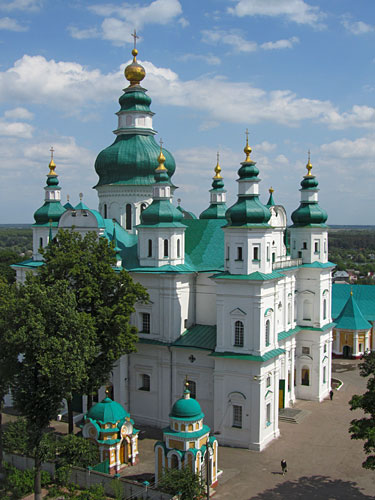 The legendary St Anthony’s Caves at the Troyitsko-Illynsky Monastery in the city of Chernihiv are one of the oldest remnants from the times of the Kyivan Rus. In 1069, St Anthony, the founder of the Pechersk Lavra in Kiev, visited the area of Chernihiv. Later a monastery was established there and the famous St Elias’ Church was constructed in the 12th century. For many centuries the monks dug catacombs until an underground complex developed. Many visitors to the caves report a feeling of vitality and euphoria, and people from all over Ukraine come to be cured of different ailments. Besides the caves, the Monastery has the Holy Trinity Cathedral, constructed in 1679, where the relics of St Feodosy and St Lavrenty are kept, and a 58-meter bell tower that offers a fascinating view of the city.

Rabbi Nachman (1772-1810), a great grandson of the Baal Shem Tov (the founder of Hasidic Judaism), breathed new life into the Hasidic movement by combining the esoteric secrets of Kabbalah with Torah scholarship. He attracted thousands of followers during his lifetime and his influence continues to the present. Rabbi Nachman's religious philosophy revolved around closeness to God and speaking to God in normal conversation, as you would with a best friend. During the Rabbi’s lifetime, large numbers of Hasidic Jews traveled to be with him for the Jewish holidays of Rosh Hashana, Chanuka, and Shavuot, when he delivered his formal lessons. On the last Rosh Hashana (the Jewish New Year) of his life he told his followers the importance of being with him for that holiday in particular. After his death, pilgrims began to flock to Uman and today the pilgrimage to Rabbi Nachman’s tomb attracts tens of thousands of Jews from both the Ashkenazim and Sephardim groups.