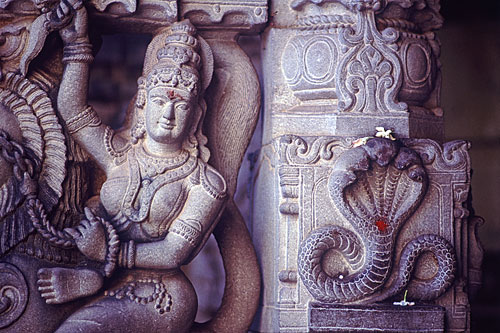 
Located on the side of the ancient sacred hill of Srigiri, in the Nallamalai range of Andhra Pradesh, is the exotic temple of Srisailam. The temple complex, whose existing buildings date from the 2nd century AD, is one of the twelve Jyotir Linga Shiva shrines as well as one of the eighteen most sacred goddess shrines, or Shakti Pithas. This unique combination of major god and goddess shrines at the same site makes Srisailam one of India's most holy sites. Shiva is worshipped here in his form of Lord Mallikarjuna, and Shakti, his consort, as Sri Bharamaramba Devi. The images of these deities, both extremely old, are enshrined in the more recent temple built by the Vijayanager king Harihara Raya around 1404 AD. The temple, whose popular name is Sriparvata, is surrounded by a great fortress-like wall, which is 20 feet high, 6 feet wide and 2120 feet in circumference. Built in in 1520 AD, the wall has 3200 stones, each weighing over one ton, and is decorated with fine relief carvings depicting scenes from Hindu mythology.

Goddess worship occurred in India since deepest antiquity and clearly predates the Indus Valley Harappan civilization (3000 BC). Worship of the goddess in her many forms occurs all over the sub-continent and in many places she is more popular than the gods Shiva or Vishnu.  All the goddesses of Hinduism are considered to be manifestations of the multi-faceted personality of the one great Mother Goddess of creation. According to certain Hindu myths, the goddess is the combined energy of all the gods, who created and then equipped her with weapons so that she might destroy a demon whose power was greater than theirs. Different temples will enshrine different images of the goddess, from her peaceful aspects of Parvati, Lakshmi, and Saraswati, to her fearful aspects of Durga, Chamunda and Kali; she is both the gentle giver of life and the terrible mistress of death. Worshipped by particular sects of Hinduism known as Tantric, the goddess encourages meditation on yantras (visual mantras considered to be magic diagrams), erotic sexual practices, and the ritual slaughter of animals. Before her shrines at many Shakti Pitha sites are large, two-pronged forks for securing the heads of animals being sacrificed. In the active Shakti Pitha shrines at least one goat will be sacrificed daily and on major festival days several hundred goats and many buffaloes will be slaughtered. Pilgrims passing the place of sacrifice will dip a finger in the blood and touch it to their lips and foreheads. The background idea here is not that the goddess is cruel, but that she is looked upon as the protectress from all evil, ailment, danger and death. She should frighten away the demons and sorcerers of misfortune. In her terrible aspects she also confronts pilgrims with the transience of life and death, thereby encouraging them to seek eternal wisdom and enlightenment.

Shakti was the daughter of King Daksa and Queen Prasuti. She was also the wife of Shiva, whom King Daksa disliked for being a rough ascetic and for marrying Shakti against his wishes. King Daksa once held a great ceremony, called a yagna, to which he invited neither his daughter nor son-in-law Shiva. Shakti was offended by this slight and attended the ceremony uninvited. Insulted by Daksa, she took her life by immolating herself in the ceremonial fire. On hearing this news, Shiva hastened to the house of Daksa, whom he decapitated, and then began to disrupt the ceremony and claim the body of his wife.

As the obstruction of the yagna ceremony would create havoc and severe ill effects on nature, the gods Brahma and Vishnu appealed to the grief-stricken Shiva, requesting that he permit the ceremony to be completed. Shiva complied and also affixed the head of the ram used in the ceremony to the decapitated body of Daksha. Returned to life, Daksha apologized to Shiva and begged for mercy from the Parabrahman (the Supreme Almighty who is formless) who informed him that Shiva was in fact a manifestation of Parabrahman. Daksha then became a great devotee of Shiva.

Still inconsolable at the loss of his beloved wife, however, Shiva placed her body on his shoulder and began the Tandava, a mad dance through the universe. In order to restrain Shiva and protect the universe from destruction Vishnu threw his discus (or shot arrows in some accounts) to dismember the body of Shakti limb by limb (other sources say he entered Sati’s body by yoga and cut the corpse in to several pieces). When Shiva was thereby deprived of the body, he ceased his mad dance. The parts of Shakti's body (or her jewelry) fell from Shiva's shoulders to the earth and the places where they landed became the sites of the sacred Shakti Pitha shrines. For countless centuries these sites have been visited by women having ailments in certain parts of their bodies - each temple enshrining a particular part of Shakti's body is believed to have the miraculous capacity to heal that same part of a woman's body. At all the Shakti Pitha temples, the Goddess Shakti is also accompanied by her consort Lord Bhairava, a manifestation of Lord Shiva.

The geographical location of the Shakti Pitha temples is noteworthy. There is a considerably higher concentration of these temples in the eastern part of India, particularly the northeast. Around forty per cent of the temples are located in this region, which may perhaps be called the heart of the goddess cult in India. The history of the peopling of India suggests that the aboriginal population and their goddess cults moved further east following the Aryan invasion in the northwest starting in 1500 BCE, either being forcefully driven out or willingly migrating in search of safer places. Also notable is that almost all the Shakti Pitha temples are closely associated with natural objects; most of the shrines occupy either hill or mountain top locations or other elevated places.

The names and locations of the Shakti Pithas may be found on these Wikipedia and Temple Purohit pages. Readers interested in learning more about these places can consult books by Bagchi, Housden, Morinis, Sastri, and Sircar listed in the bibliography. Directions to the shrines may be found in the guidebook entitled India: A Practical Guide, by John Howley.