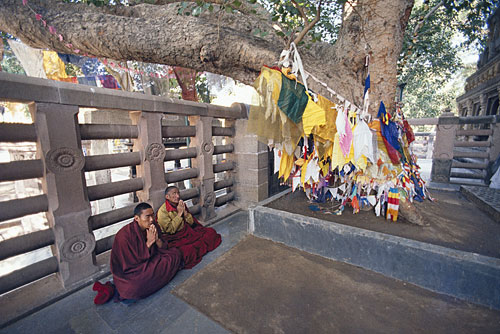 Buddhist Monks at Bodhi Tree (The site of Buddha's enlightenment)


Bodh Gaya, located 100 km (62 mi) south of Patna in the Indian state of Bihar, is the most venerated sacred place in Buddhism. It is the place where Prince Siddhartha Guatama, while meditating beneath the Bodhi Tree, attained enlightenment and became the Buddha.

Traditional accounts say that, in the early years of the 4th century BC, Siddhartha Gautama saw the suffering of the world and wanted to be free from it. As a young man, following the ancient traditions of Hinduism, he sought out spiritual teachers. Inquiring of their knowledge, he diligently practiced various yogas and meditations. Seven years passed, the last three in extreme asceticism, yet still he had not achieved his goal of enlightenment. 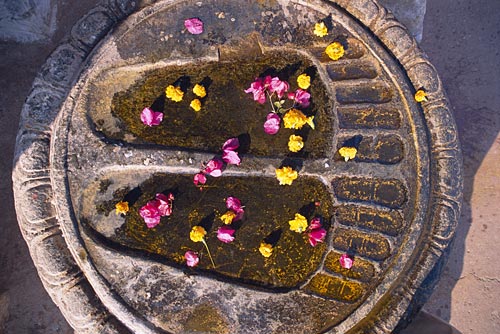 Siddhartha then journeyed toward the ancient sacred forests of Uruvela (modern Gaya in Bihar, in north India) with the intention of finally and completely realizing the infinite. Guided by visionary dreams and following in the footsteps of the Buddhas of three previous ages, Krakucchanda, Kanakamuni and Kasyapa (who had each attained enlightenment at the site) Siddhartha sat beneath the Bodhi Tree. Touching the earth, thereby calling it to witness the countless lifetimes of virtue that had led him to this place of enlightenment, he resolved not to rise again until enlightenment was attained.

"Here on this seat my body may shrivel up, my skin, my bones, my flesh may dissolve, but my body will not move from this seat until I have attained Enlightenment, so difficult to obtain in the course of great periods of time".

As Siddhartha sat in deep meditation beneath the Bodhi Tree, Mara, the Dark Lord of Death, came to distract him from his endeavor. When the earth shook, confirming the truth of Gautama's words, Mara unleashed his army of demons. In the epic battle that ensued, Siddhartha's wisdom broke through Mara’s illusions. The power of his compassion transformed the demons' weapons into flowers and Mara and all his forces fled. Three days and nights passed and Siddhartha’s intention was realized. He became the Buddha, meaning the ‘Enlightened One’. 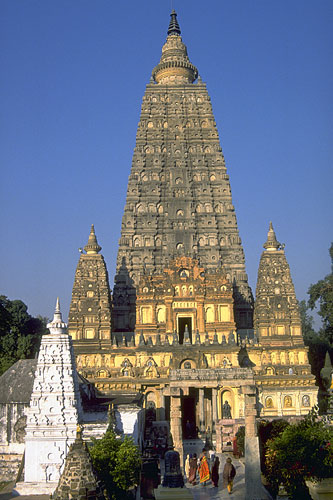 The Buddha then spent the next seven weeks at different places in the vicinity meditating and considering his experience. For the first week he continued sitting beneath the Bodhi tree. During the second week he remained standing while staring without interruption at the Bodhi tree. The spot where he stood is marked by the Animeshlocha Stupa, the Unblinking Stupa, which is located in the northeast of the Mahabodhi Temple complex. The Buddha is said to have walked back and forth between the location of the Animeshlocha Stupa and the Bodhi tree. According to legend, lotus flowers sprung up along this route and it is now called Ratnachakarma, or the Jewel Walk.

Following these weeks of intensive meditation, at the request of the god Indra, the Buddha began to speak of the great truths he had realized. His first sermon was given at Isipatana (modern Sarnath near Banaras). This first discourse, often called "Setting in Motion of the Wheel of Truth" presented the Four Noble Truths and the Noble Eightfold Path for which Buddhism is so famous. During the remaining 45 years of his life, the Buddha is said to have traveled in the Gangetic Plain, in what is now Uttar Pradesh, Bihar and southern Nepal, teaching a diverse range of people from nobles to poor farmers.

In approximately 250 BC, about 250 years after the Buddha attained enlightenment, Emperor Ashoka visited Bodh Gaya and established a monastery and temple there. As part of the temple, he built the Diamond Throne, or Vajrasana, to mark the exact spot of the Buddha's enlightenment. Ashoka’s temple was replaced in the second century AD by the present Mahabodhi temple, which was refurbished in AD 450, 1079, and 1157, then partially restored by Sir Alexander Cunningham in the second half of the nineteenth century, and finally fully restored by the Burmese Buddhists in 1882. 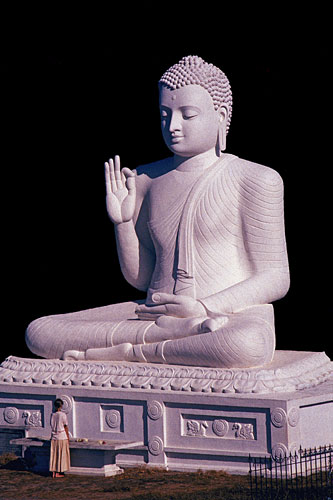 According one to legend, Ashoka's wife, Queen Tissarakkhā, had the original Bodhi Tree secretly cut down because she became jealous of the time Ashoka spent there. It grew again, however, and a protective wall was built around it. The nun Bhikkhuni Sangamitta, daughter of Ashoka, took a cutting of the tree to Sri Lanka where the Lankan king Devanampiyatissa planted it at the Mahavihara monastery in Anuradhapura, where it still flourishes today.

The original tree at Bodh Gaya was destroyed by King Puspyamitra during his persecution of Buddhism in the 2nd century BC and the tree planted to replace it, probably an offspring, was destroyed by King Sassanka at the beginning of the 7th century AD. The tree that grows at Bodh Gaya today was planted in 1881 by a British archaeologist after the previous one had died of old age a few years before.

The environs of Bodh Gaya have attracted sages, yogis, and meditators since the time of Buddha. Such great spiritual figures as Buddhajnana, Padmasambhava, Vimalamitra, Nagarjuna and Atisha have lived and meditated beneath the Bodhi Tree. In religious iconography, the Bodhi Tree (Ficus religiosa or Sacred Fig) is recognizable by its heart-shaped leaves, which are usually prominently displayed.

More Information on Pilgrimage in Buddhism 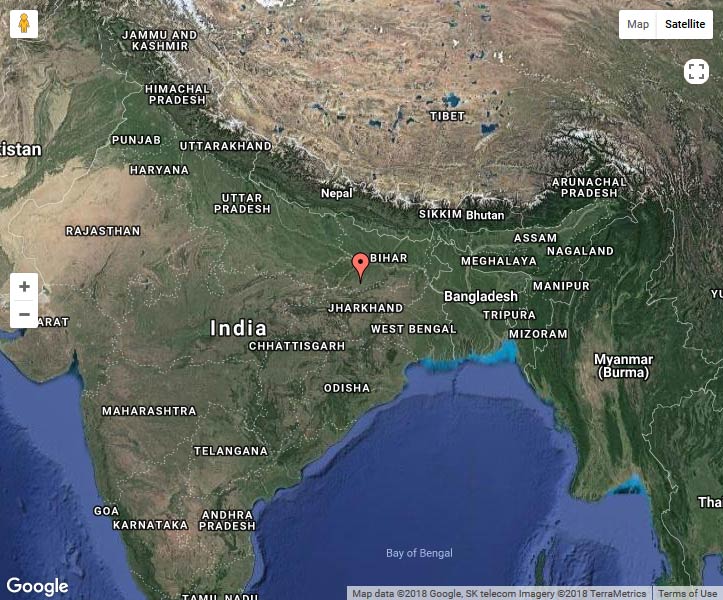