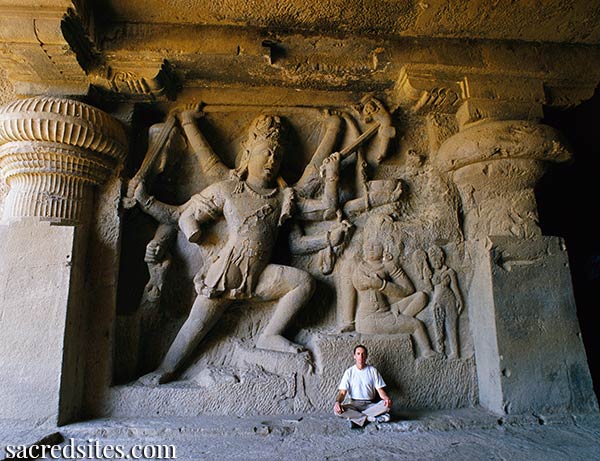 Shiva slaying the demon Andhakasura, who had lusted after his wife Parvati. Ellora, India


The complex of Ellora temples in Maharashtra state represents the greatest example of cave-cut architecture in the world. Dating from the Gupta period of the 6th to 8th centuries AD, the temples were constructed by digging into a mountain side and removing thousands of tons of rock, leaving only the temple structures behind. At Ellora there are 34 cave temples: 12 Buddhist, 17 Hindu, and 5 Jain. The construction and use of these temples by different religions is a wonderful testament to the extraordinary spiritual maturity of ancient India.

The photograph shows Shiva, in the form known as Andakasuramardana, in cave number 29 of the Ellora complex. The magnificent temple, called Sita-ki-Nahani or Dhumarlena, was built between AD 650-725, and is 50 meters wide by 5 meters high. As Andakasuramardana, Shiva is a slayer of a blind demon. The goddess Kali crouches below to catch the demon's blood in a bowl. While showing significant motion, this particular Shiva form is not a representation of dancing. During his divine dance, Shiva never has fangs or a fearsome expression, but displays a radiant calm. Mythologically Shiva is regarded as the great master of dance and all the 108 modes of dancing have come from him. Shiva's dancing manifests the Panchakryta or five acts of god: creation, preservation, destruction, embodiment and release. It is said that he dances every evening in order to relieve the sufferings of creatures and entertain the gods and goddesses who gather upon Mt. Kailash. Shiva is believed to have manifested in the Nataraja dancing form at the celebrated pilgrimage shrine of Chidambaram in Tamil Nadu state, also shown on this web site.