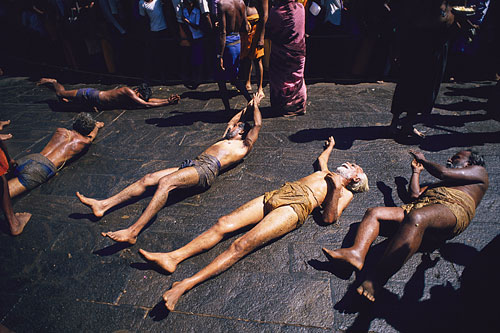 
In the Indian state of Kerala, only 10 degrees above the equator, is a land of steep mountains thickly covered with splendid tropical forests. The early people of this region, of a Dravidian ancestral stock, lived amongst the trackless valleys and roaring streams in small tribal groups. Farming little, they hunted in the teeming forests, and their primary deity, Ayappa, was a youthful forest god. Various legends explain the birth of Ayappa (also known as Dharmasasta). One begins with Shiva roaming the mountain kingdoms of the Himalayas. There he sees a lovely maiden and, overcome with desire, makes passionate love with her. But the maiden is married to another man, a tribal chieftain who vows revenge on the god. The tribal chieftain retires to an ice cave in the high mountains and practices austerities for a thousand years. Through these austerities he gains great psychic powers and finally goes forth to punish Shiva. From the heights of Mt. Kailash, Shiva sees the tribal chieftain approaching. The chieftain looks like a terrible demon and Shiva, overcome with fear, calls on the god Vishnu for assistance and protection. Vishnu manifests himself as a beautiful damsel, seduces the demon chieftain, and destroys him. But then Shiva, once again overcome with sexual desire, sees the radiant damsel (who is merely Vishnu in another form) and mates with her. Out of this union comes a baby boy named Ayappa. Embodying the qualities of both Vishnu and Shiva, Ayappa is an avatar (divinity in human form) born into the world to battle the demons of the hill tribes of Kerala. Shiva tells the magical child of his dharma-life (a life of service), and leaves him upon the bank of a mountain stream where he is discovered by a childless tribal king. Brought up by the king, Ayappa does many miracles, is a great healer and a defeater of demons. After fulfilling the purpose of his incarnation Ayappa entered the inner sanctum of the ancient temple upon sacred Mt. Sabari and disappeared. During his mythical life, Ayappa kept the company of tigers and leopards. Mystics living in the deep forests surrounding the Sabarimala Mountains have for a thousand years reported seeing Ayappa riding through the jungles upon a majestic tiger.

The shrine of Sabarimala is one of the most remote shrines in southern India yet it still draws three to four million pilgrims each year. Before beginning the multi-day walk through the mountain jungles to get to Sabarimala, the pilgrims prepare themselves with 41 days of rigorous fasting, celibacy, meditation and prayer. Finally arriving at the shrine, the pilgrims will wait in line for hours, even days, to have one or two seconds in front of the image of Ayappa. After seeing the deity, many pilgrims will complete a vow called Shayana Pradikshanam. In the Malayalam language of Kerala, Shayana means “body” and Pradakshinam means “revolution,” so Shayana Pradakshinam means “revolution with the Body.” This devotional practice is done not only in Sabarimala but also in other temples in Kerala.

The Sabarimala shrine is only open a few times each year: the Mandalam festival covering 41 days from November 15 to December 26; the Makaravilakku from January 1-14; on Vishu, the day of the vernal equinox in April; and during smaller festivals in May/June and August/September. The shrine, unlike many in southern India is open to persons of all religious callings, and there are no caste restrictions during the pilgrimage. However, women - unless they are younger than six or older than sixty - are not allowed to come to Sabarimala. This is explained by referring to the celibacy of Ayappa and the concern that he might be lured away from his shrine by a woman his age (if certain readers find this somewhat sexist, they are informed that there are particular goddess shrines in south India which men are forbidden to enter). It is said that during the pilgrimage periods no tigers are found along the forest trails leading to Sabarimala. This is explained as resulting from Ayappa’s power over tigers. Other holy places associated with Ayappa are Kulattupuzha, Aryankavu, Accankovil, and Kantamala.

Additional notes on SABARIMALA and AYAPPA

The information given above was taken from different books on the Sabarimala shrine. After putting these writings on the web site, I received the following material from a reader of the web site, This email address is being protected from spambots. You need JavaScript enabled to view it.. This new material, relating to the legend of Ayappa, is somewhat different than what I had written. This sort of difference in legend and myth is something quite common in the study of sacred places, and therefore I have included both versions of the Ayappa myth. Thank you to Geetha Krishnan for this alternative myth.

Shiva does not call upon Vishnu after mating with a tribal woman. The story goes that Shiva gives a boon to an asura (a demon) that allows him to merely touch a person on his head and he will fall dead. The asura then thanks him and wants to try out the boon on Lord Shiva himself. In fear, Shiva runs and calls upon Lord Vishnu for help. Lord Vishnu in the guise of the beautiful maiden Mohini, which literally means "enchantress" or "seductress", approaches the asura. She questions him about why he is chasing Shiva. The asura tells her how he has received this boon and wanted to test it on Shiva himself. Mohini tricks the foolish asura by telling him that the boon was really ineffective and Shiva did not want him to know that. If he wanted, he could test it on himself. The asura placed his hand on his own head, believing her, and he falls dead. Shiva is very grateful towards Vishnu but is enchanted by his female form. They have the child Ayappa to satisfy the demigods' plea to save them from the torments of the demon Mahishi. Ayappa is then raised by the King of Panthala, Rajashekharan, a truly royal king not a tribal king, who was childless. Right after adopting the child Ayappa, whom he called Mani Kanda, meaning ‘one who wears a bell around his neck’ (for the child was found wearing a small bell on a chain around his neck that attracted the king's attention who was out on a hunt with his men), the king has a child of his own. When Ayappa was about to reach age, the queen feared that her own child would lose his right to the throne, so with the minister of the court, she schemed to murder Ayappa. She faked being ill saying that her stomach was in unbearable pain. The minister bribed the court physician to say that the only remedy would be a female tiger's milk. Ayappa, willing to do anything for his mother, goes on the dangerous mission alone to get the milk. Instead, he meets Mahishi and slays her. The gods in happiness and joy assume the form of tigers and accompany back to the palace to give the so-called needed milk remedy. Upon seeing this, the queen confessed her schemes and begs forgiveness from the young prince. Ayappa, forgiving his mother, takes upon the right of celibacy and leaves the palace to reside on Sabarimala. Women are not allowed to go to the temple, not in fear that Ayappa might leave the shrine, but that women will desire and fall in love with the beautiful celibate god. They are allowed after they have reached menopausal age.

For further information on the pilgrimage to Sabarimala, consult: 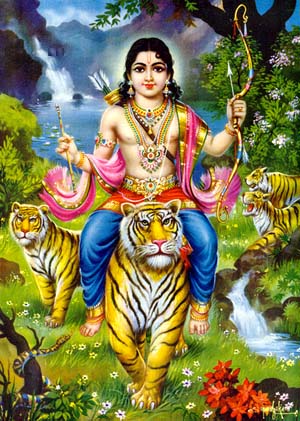