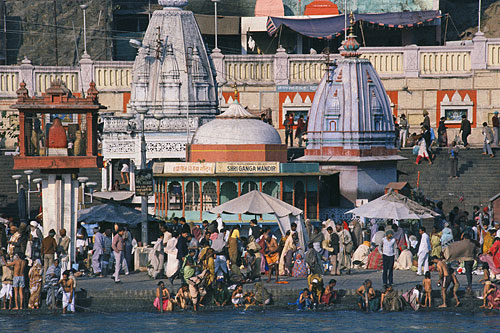 
Hardwar, or Haridwar, is one of the holiest places for Hindus in India. It is significant that pilgrims often go from Haridwar to the two great Himalayan shrines of Kedarnath and Badrinath, as Har means Shiva (the deity of Kedarnath), Hari means Vishnu (the deity of Badrinath), and Dwar means gate. Hardwar is therefore the gateway to the two holy shrines of Shiva and Vishnu. The town has also been called Gangadvar, meaning 'Door of the Ganga' because at this place the sacred river Ganges leaves the mountains to flow out upon the Indian plains. Many years ago it was also called Kapilsthan after the great sage Kapil, who lived and meditated there. Today, Hardwar is the home of many Ashrams (hermitages and places for meditation) and Dharamshalas (rest houses for pilgrims) that have been established by various swamis, yogis and religious institutions. Throughout the year large numbers of pilgrims come to bathe in the Ganges, especially at the Hari-ka-charan ghat (also called Hari-ki-Pauri), where a footprint of Vishnu is worshipped. Pilgrims also consider it important to visit the beautiful Shiva temple of Daksheswar.

A large pilgrimage festival is held each year in April at the beginning of the Hindu solar year. Every twelve years the great festival of Kumbha Mela is held and every six years an Ardh Kumbha, or half Kumbha. During these important festivals millions of pilgrims throng to Hardwar from throughout India. Hardwar is also one of India’s Moksapuris, or Seven Sacred Cities, where moksha (spiritual liberation) may be more easily attained. Twenty-four kilometers north of Hardwar is another holy town named Rishikesh, meaning 'abode of the mystic sages'. These two places, Hardwar and Rishikesh, have place-names that indicate their spiritual rather than secular attributes. Nowadays both towns are bustling social centers; in ancient times, however, they were quiet forests groves, nestled along rushing mountain rivers - the perfect place for contemplation and a life in harmony with the way of nature. While not speaking directly of Hardwar or Rishikesh, the following passage from the Anusasana Parva Mahabharata (a classic text of Hinduism) well expresses their magical atmosphere: