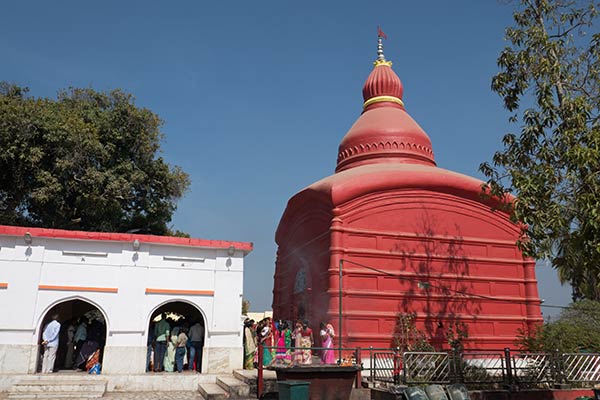 
Locally known as Matabari, the goddess temple of Tripura Sundari is perched upon a small hill in the ancient town of Udaipur, about 30 miles from Agartala. Famous as one of the 51 Shakti Pitha goddess sites, it is believed that Shakti's right foot fell at this place (additional information on the myth of the Shakti Pitha temples). The king Maharaja Dhanya Manikya first constructed the temple in 1501, it was repaired by Maharaja Rama Manikya in 1681 after being damaged during a storm, and had further repairs by Maharaja Radhakishore Manikya at the beginning of the 20th century. Within the temple are two images of the goddess: Tripura Sundari, or Soroshi, which is 5 feet tall (the photograph below) and the statue of Chhotima, which is 2 feet tall. On the eastern side of the temple is a lake called Kalyan Sagar, where large fish and tortoises are found, and the temple is also called Kurma Pitha due to its shape somewhat resembling that of a tortoise.

Legends explain the location of the temple and the deity that was installed. King Dhanya Manikya, who had ruled the region of Tripura in the later years of the 15th century, was once engaged in building a temple for the god Vishnu. One night, however, he experienced a vision in which he was instructed to place an image of the goddess Tripurasundari in the temple. He found this confusing because Vishnu was worshipped by the Vaishna sect, while Tripurasundari, the wife of Shiva, was worshipped by the Shaiva sect. Following another vision, in which he was instructed to use the goddess image from the Chandranath temple near Chittagong (in what is now the country of Bangladesh), he sent his workers to procure the statue. The workers found two images there, one a Shiva Lingam and the other a statue of Tripurasundari. Unable to move the Shiva Lingam, they took only the statue of the goddess. Yet there were further complications. According to the king's vision, the statue of Tripurasundari could only be moved during the one night following its removal from Chandranath. The workers toiled through the night but with the first rays of the sun the statue became firmly fixed to the ground where the temple of Tripura Sundari now stands. Another legend tells that the statue was found submerged under the waters of the Brahmachhara River near Matabari and that the king received a divine message to rescue and install it in a temple.

The Tripura Sundari temple is visited by many hundreds of pilgrims every day and during the festival of Diwali in the autumn hundreds of thousands come. The temple is a holy place of both the Vaishnava and Shaiva sects. 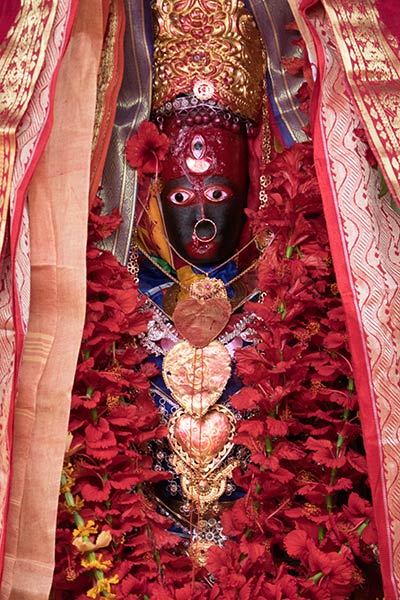