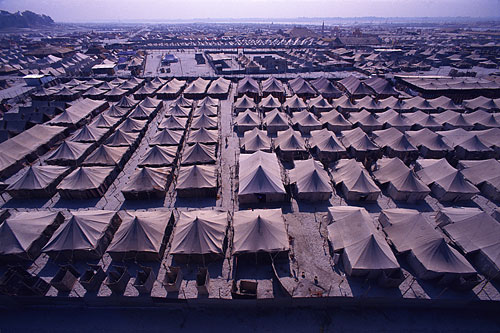 
Sacred site festivals in India, called melas, are a vital part of the pilgrimage tradition of Hinduism. Celebrating a mythological event in the life of a deity or an auspicious astrological period, the melas attract enormous numbers of pilgrims from all over the country. The greatest of these, the Kumbha Mela, is a riverside festival held four times every twelve years, rotating between Allahabad at the confluence of the Ganges, Yamuna and Saraswati rivers; Nasik on the Godavari River; Ujjain on the Sipra River; and Hardwar on the Ganges River. Bathing in these rivers during the Kumbha Mela is considered an endeavor of great merit, cleansing both body and spirit. The Allahabad and Hardwar festivals are routinely attended by five million or more pilgrims (13 million visited Allahabad in 1977, 18 million in 1989, and nearly 24 million in 2001) thus the Kumbha Mela is the largest religious gathering in the world. It also one of the oldest.

Two traditions are in circulation regarding the origin and timing of the festival: one that stems from ancient texts known as the Puranas, and the other that connects it with astrological considerations. According to the Puranic epic, the gods and demons had churned the milky ocean at the beginning of time in order to gather various divine treasures including a jar containing amrita, the nectar of immortality. As the jar emerged from the ocean the gods and demons began a terrific battle for its possession. For twelve days and twelve nights (equivalent to twelve human years) the gods and demons fought in the sky for the possession of the potion of immortality. During the battle, which according to some legends the gods won by trickery, four drops of the precious potion fell to earth. These places became the sites of the four Kumbha Mela festivals. The astrological tradition (ascribed to a lost Puranic text and not traceable in existing editions) seems to derive from a very ancient festival called the Kumbha Parva, which occurred at Hardwar every twelfth year when Jupiter was in Aquarius and the sun entered Aries. At some later time the term 'Kumbha' was prefixed to the melas held at Nasik, Ujjain and Prayaga (the earlier name of Allahabad), and these four sites became identified with the four mythical locations of the immortality potion. In theory the Kumbha Mela festivals are supposed to occur every three years, rotating between the four cities. In practice the four-city cycle may actually take eleven or thirteen years and this because of the difficulties and controversies in calculating the astrological conjunctions. Furthermore, the interval between the Kumbha Mela at Nasik and that at Ujjain is not of three years; they are celebrated the same year or only a year apart. This deviation in practice is intriguing and can not be fully explained by either astrological or mythological means. The following chart gives the astrological periods of the four melas, and the years of their most recent and future occurrences:

The antiquity of the Kumbha Mela is shrouded in mystery. The Encyclopedia Britannica states that the Chinese Buddhist pilgrim, Hsuan Tsang, made a visit to an Allahabad festival in the 7th century AD while in the company of the King Harsavardhana. Tradition associates the 9th century philosopher Sankaracharaya with the organization of the Kumbha Mela at Prayaga (Allahabad). Sankaracharaya had established four monasteries in the north, south, east and west of India, and had called upon yogis, sadhus and sages to meet at these sites for an exchange of philosophical views. These sites in the four cardinal directions were separated by great distances, however, and therefore the more centrally located site of Prayaga became the meeting place of choice. Indologists speculate that during the 9th to 12th centuries other monks and religious reformers perpetuated this periodic assemblage of sadhus and householders at sacred places on the banks of holy rivers, in order to create an environment of mutual understanding amongst different religious sects. Additionally, the festival gave householders the opportunity to benefit from their association with the normally reclusive sages and forest yogis. What was originally a regional festival at Prayaga thus became the preeminent pan-Indian pilgrimage site.

While many millions of Indians, male and female, young and old, lay person and monk, visit the Allahabad Kumbha Mela, the festival is traditionally known as the mela of ascetics and sadhus. At the most auspicious hour on the most auspicious day of the month-long festival many thousands of naked holy men from various sects will immerse themselves in the river for a ceremonial bath. Following the bathing of the sadhus, millions of other people attempt to enter the river. For a devout Hindu, to bathe at the Kumbha Mela sites (especially Allahabad and Hardwar) at this auspicious time is considered an opportunity of immeasurable significance. This great religious fervor of so many people focused on so small an area of land and water has frequently resulted in hundreds of pilgrims being trampled to death as the masses surge towards the river banks. During the 1954 Kumbha at Allahabad over 500 pilgrims were killed. The Indian government has taken measures to address this problem yet little can be done when such great numbers of pilgrims are involved.

Furthermore, it is important to note that many Hindus consider the Kumbha Mela sites to be the most favored places at which to die, and ritual suicide, though discouraged by the government, is still practiced. Westerners are bewildered, even shocked, by this matter and frequently make judgments without understanding the mythological, religious and cultural reasons behind the behavior. While it is beyond the scope of this essay to discuss the subject in detail, it is interesting to focus attention upon the two origin myths of the Kumbha Mela festival. Four drops of a nectar or potion of immortality were supposed to have fallen to earth at these sites, and at particular astrological periods the four sites are believed to function as portals into immortality and everlasting union with god. How did such myths arise and what is the message encoded in them? Perhaps there is some energy, some mysterious spirit or power, manifest at these places and times that somehow assists human beings to more fully experience spiritual immortality and divinity. The fact that hundreds of millions of people (coming from the most ancient and sophisticated philosophical and metaphysical system on earth) have for thousands of years believed this to be true suggests that an awesome power is indeed present at the Kumbha Mela sites.

In the case of those who give up their bodies after purifying themselves at Prayaga by bathing at the confluence of these two rivers – Ganga and Yamuna – the two wives of the ocean, there is no bondage of another body in a future birth and this liberation is achieved even without philosophical knowledge.
—Raghuvamsa 13-58