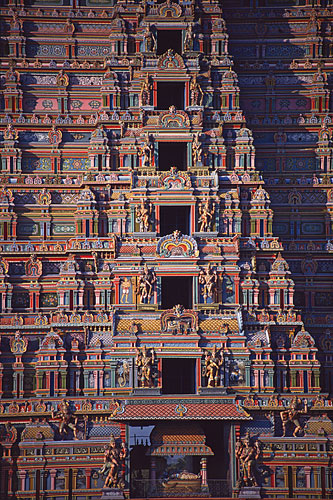 
Located in the city of Tiruchirappalli, on a small island between branches of the rivers Kaveri and Coleroon, stands the massive temple of Srirangam. The most revered of the 108 pilgrimage shrines of Vishnu, and the largest temple complex in all of India, it is surrounded by seven concentric walls (the outermost wall having a perimeter of over 3 kilometers) and 21 towers called gopurams. Srirangam enshrines a statue of Vishnu reclining on a great serpent. A legend tells that this idol, known as Sri Ranganatha, was being transported across India to Sri Lanka by the sage Vibhisana. Resting from his efforts for awhile, he set the statue upon the ground, yet when ready to continue his journey, he found the statue had magically bound itself to the earth. A hundred hands could not budge the idol, so a small temple was built over it. The temple complex, which has since grown around the statue, has been rebuilt and enlarged many times over thousands of years and its original date of founding is unknown to archaeology. Most of the temple complex standing today, including a grand hall of 1000 beautifully sculptured pillars, was constructed between the 14th and 17th centuries.

Vishnu, the second deity of the trinity of Hindu gods, is responsible for the sustenance, protection and maintenance of the created universe. A gentle, loving god representing the heart, he is the focus of intense devotional worship by a large percentage of the Indian population. To ward off the extraordinary perils that threaten creation, Vishnu frequently incarnates himself. He has appeared as Rama, Krishna, the Buddha and other incarnations. The Naanmugan Gopuram, shown in the photograph, is thirteen stories tall and completely covered with intricately carved, brightly painted statues of the many incarnations of Vishnu. More than being just an extraordinary expression of art, these sculptures function as three-dimensional story-books of Hindu mythology. Similar in purpose to the stained glass windows of Europe's medieval cathedrals, these beautiful sculptures were intended to visually communicate religious myths to a largely illiterate population. For 2000 years the temples of Srirangam have been a center of Bhakti Yoga, which may be defined as the practice of devotional love of god as a spiritual path leading to enlightenment. Because of the generous financial support of the temple by numerous dynasties of ancient India, Srirangam has always been a haven for persons wishing to dedicate their lives to the practice of meditation and devotion. Many of India's most loved saints and sages have spent time at Srirangam including the 11th century sage Ramanuja who lived and was buried in the temple grounds.

Srirangam is also listed as one of the Nava Graha Sthalas, or temples representing the planets. The south Indian temples in this group are: