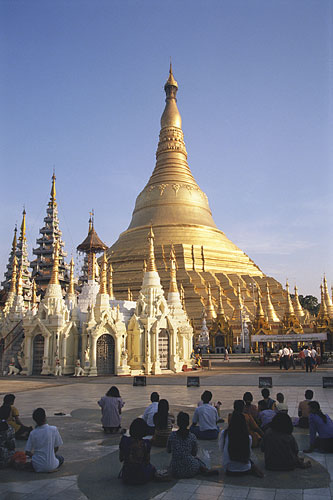 
In 1586, an English man, Ralph Fitch, visited the great pagoda and had the following to report:

....it is called Dogonne, and it is of a wonderful bignesse, and all gilded from the foot to the toppe...it is the fairest place, as I suppose, that is in all the world; it standeth very high, and there are foure ways to it, which all along are set with trees of fruits, such wise that a man may goe in the shade above two miles in length....

The origins of Shwedagon are lost in antiquity, its age unknown. Long before the pagoda was built, its location on Singuttara hill was already an ancient sacred site because of the buried relics of the three previous Buddhas. According to one legend, nearly 5000 years had passed since the last Buddha walked the Earth, and Singuttara hill would soon lose its blessedness unless it was reconsecrated with relics of a new Buddha. In order that such new relics might be obtained, King Okkalapa of Suvannabhumi spent much time atop the hill, meditating and praying. A series of miracles ensued, and eight hairs of the historical Buddha were, somewhat magically, brought to the hill. To enshrine the relics, multiple pagodas of silver, tin, copper, lead, marble, iron and gold where built one on top of the other to a height of twenty meters. During the following centuries, passing from myth to historical fact, the pagoda grew to its present height of ninety-eight meters. Much of the continued construction of Shwedagon was actually reconstruction following disastrous earthquakes. During the 17th century the pagoda suffered earthquake damage on at least eight occasions. A particularly bad quake in 1786 brought the entire top half of the pagoda to the ground and its current shape and height date from the reconstruction of that time.

While much of the pagoda's beauty derives from the complex geometry of its shape and surrounding structures, equally mesmerizing is its golden glow. The lower stupa is plated with 8,688 solid gold bars, an upper part with another 13,153. The tip of the stupa, far too high for the human eye to discern in any detail, is set with 5448 diamonds, 2317 rubies, sapphires, and other gems, 1065 golden bells and, at the very top, a single 76-carat diamond. Surrounding the pagoda are a plentitude of smaller shrines housing pre-Buddhist spirits called Nats, miracle working images, and even a wish granting stone. The entire temple complex radiates a palpable sense of beauty and serenity.