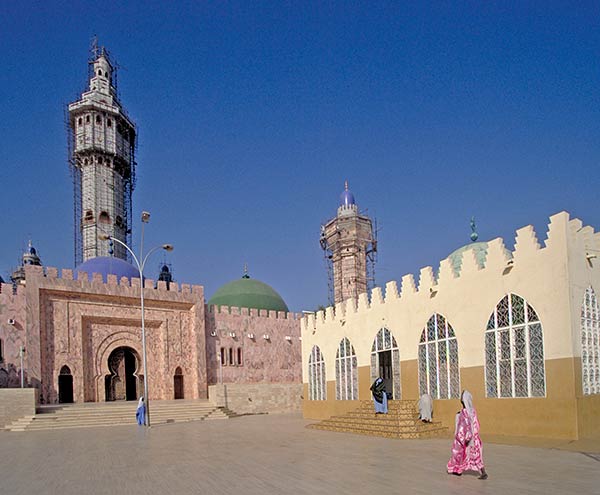 Soaring skyward from the dusty plains of western Senegal (170 kilometers due east of the capital of Dakar), stands the Great Mosque of Touba. Constructed in 1926 to house the tomb of the Senegalese saint, Cheikh Ahmadou Bamba, the enormous mosque is the most visited Islamic pilgrimage site in West Africa.

Islam has existed in Senegal for over a thousand years. The first ethnic groups to accept the religion of Muhammad were the Tukulóor kingdoms during the 11th century, and by the beginning of the 20th century, most of Senegal had been entirely Islamized. However, the style of Islam practiced in Senegal is significantly different than that found in most other Islamic countries. The Islam of Senegal is similar to the mystical Sufi tradition, which is characterized by its reverence of spiritual beings (alive or dead) that are believed to embody extraordinary amounts of baraka, or divine grace. In Senegal, Islamic practice takes the form of membership in religious brotherhoods that are dedicated to the marabouts (the founders or current spiritual leaders) of these brotherhoods. The three main sects in Senegal are:

Members of these brotherhoods vow obedience to their marabouts. The marabouts are considered to be stewards and inheritors of the baraka, or divine grace of their brotherhood's founder. Through the force of their personal baraka, marabouts are believed to have the power to heal illness and grant spiritual salvation to their followers. Most marabouts inherit their position and their disciples from their fathers. Marabouts of any brotherhood are expected to teach and counsel their followers, but marabouts of the Mouride brotherhood usually devote less time to study and teaching than they devote to organizing their disciples' work and making amulets for their disciples (these amulets, called grigri, are small leather bundles containing quotes from the Koran and are believed to protect disciples from harm, sickness, or evil). 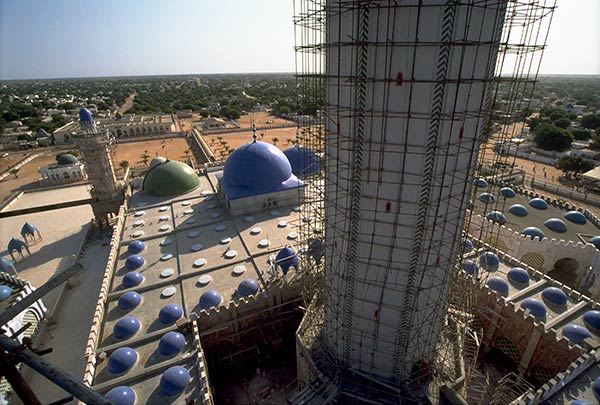 Renovations of the minaret, Great Mosque of Touba (Enlarge)

The Mouride brotherhood was begun by Cheikh Ahmadou Bamba (also known as Ahmed Ben Mohammed Ben Abib Allah or Khadimou Rassoul). Bamba was born in the village of Mbacké-Baol and lived from 1850 to 1927. The son of a marabout from the Xaadir brotherhood, Bamba was a mystic and ascetic more interested in meditation and Koranic study than in building a theocratic empire. He was also a pacifist and did not wage war on pagans as many Tijaan marabouts had done. In the first years of his religious career, Amadou Bamba had simply performed standard maraboutic functions such as teaching the Koran and preparing amulets for his followers.

Bamba did not consider himself a prophet but rather a messenger of God (one of the basic tenets of Islam is that there can be no other prophets after Muhammad, but the members of the Senegalese brotherhoods cite a passage in the Koran which states that God will send messengers every 100 years. The members of these brotherhoods believe that the founders of the brotherhoods were among these messengers). Because of his extraordinary charisma and wisdom, Bamba found that many of his followers were coming to him to partake of his baraka and to serve him rather than to learn the Koran. Although Amadou Bamba never proselytized on a national level, his fame grew rapidly through the efforts of his followers, and people flocked to him to receive the salvation that he promised his followers. The focus of his teachings was that salvation was gained through submission to the marabout and hard work.

The French colonial government feared that Amadou Bamba was gaining too much power and might be in a position to wage war against them. Although he apparently never demonstrated any such desire, he had converted various local kings and their followers and could have raised a great army had he so desired. Without bringing any legal charges against Bamba, the colonial government sentenced him to exile in Gabon (1895 to 1902) and then to Mauritania (1903 to 1907). The effect of these exiles, however, were quite the opposite of what the French expected: legends about Bamba's miraculous survival of torture, deprivation, and attempted executions spread through Senegal while he was gone, and thousands more disciples flocked to his community.

To this day, Mourides tell legends of Bamba's exile with great excitement and firm belief. For example, while on the ship to Gabon, the French forbade Bamba from praying. As praying was a divine law that he could not break, Bamba broke out of the shackles, leapt overboard and prayed on a prayer rug that he materialized on the water. When he lifted his head after his prostrations, the French authorities were astonished to see sand on his forehead. Other legends relate that when the French put him in a furnace, he simply sat down in it and drank tea with Muhammad. When they put him in a den of hungry lions, the lions just slept beside him. 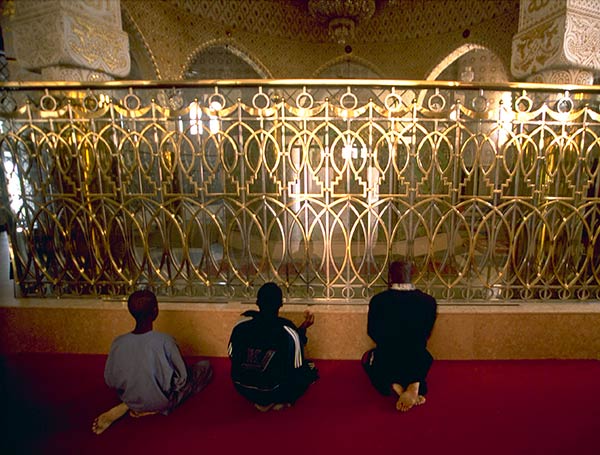 After he returned to Senegal from his second exile, his discipleship continued to grow phenomenally. In 1910, it finally dawned on the French that Bamba was not plotting war against them and their relations with him improved dramatically. The French actually began to see Bamba as an asset rather than as a threat, as they could use him to disseminate and enforce policies (he won the French Legion of Honor in 1918 for enlisting hundreds of followers to fight in the First World War). The French allowed him to found his holy city of Touba and, in 1926, to make a start on the great mosque in which he is buried (Bamba received his famous vision in the wilderness in what is now Touba. This vision told him of his prophetic mission and of the need to build a holy city at the site).

Even though Amadou Bamba seems to have been modest about his divine call, Mourides today view him as almost Muhammad equal (thereby causing extreme consternation from other Muslims, who consider this blasphemy.) Mourides distinguish themselves through complete dedication to Amadou Bamba and the lineage of marabouts that have followed him. The male descendants of Cheikh Ahmadou Bamba are considered great religious authorities (marabouts) in Senegal, and the current father of the Mourides is one of his descendants. Devout Mourides cover the walls of their home and workplace with pictures and sayings of their marabout and wear numerous amulets prepared by their marabouts, to solve their problems. Taxi and bus drivers also plaster their vehicles with stickers, paintings and photos of the marabouts of their respective brotherhoods. The Baay Fal, the most devout group of Mouride disciples, even give up the pillars of Islam, including prayer and fasting, to devote themselves to service to their marabout.

Many Mourides consider Touba, the holy city of Amadou Bamba, as important or more important than Mecca. Pilgrims come to Touba at any time, but the high point of the year is a mass pilgrimage called the Grand Màgal (48 days after the Islamic New Year), which celebrates Bamba's return from exile. At this time, about half a million Mouride followers flock into Touba from all over Senegal and Gambia. The mother of Amadou Bamba, Mam Diarra Bousso, is also considered a holy person by Senegalese people and her burial shrine is located in the city of Porokhane. Twice each year, on a date decided by the Bousso family, many thousands of Senegalese women visit the shrine for a two-day pilgrimage. 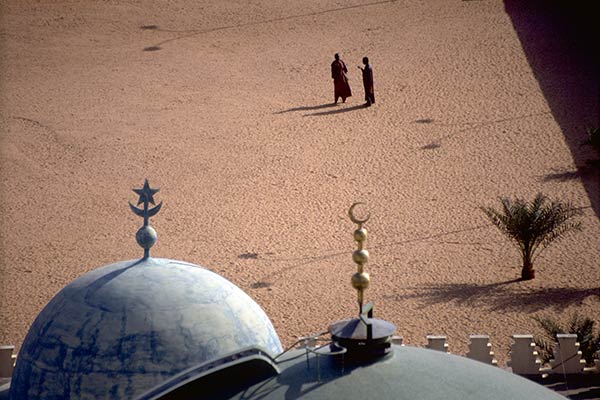 A view from the minaret, Touba mosque (Enlarge) 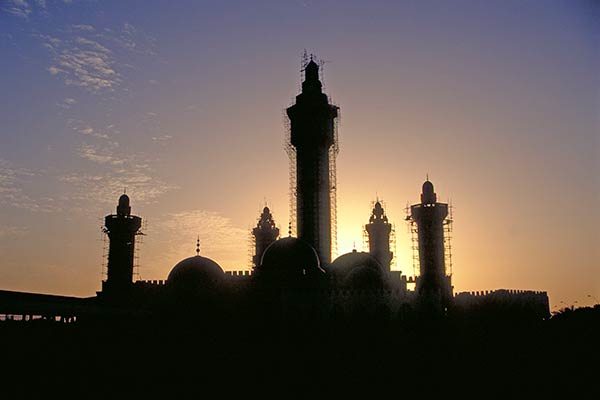 Sunset at the Great Mosque of Touba (Enlarge)