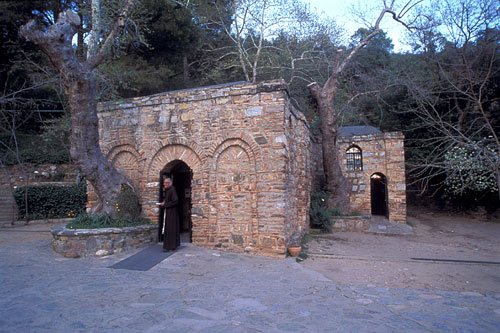 Final home and shrine of Mary, mother of Christ, near Ephesus


Situated upon the side of Bulbul Mountain and 9 kilometers from the ancient Greek city of Ephesus, the small shrine of Mary is a place of pilgrimage for both Christians and Muslims. Catholic tradition associates Mary with Ephesus because at the time of his death, Jesus put Mary in the care of John (John 19: 26-27) who then spent many years spreading Christianity in this region. In 1841, a German mystic named Anna Katerina Emmerich published a book recounting her visions of Mary living near Ephesus. Following the book's publication, ruins of a house were discovered at the present site and declared to be the house where Mary had lived the final years of her life. Known as the Panaya Kapula ('Doorway to the Virgin'), the site has been a much venerated pilgrimage destination since the late 1880's. Archaeological excavation has revealed that in the 4th century AD a stone building combining house and grave had been built. Originally a two-story house, it consisted of an anteroom (where today candles are placed by pilgrims), a bedroom and praying room (a church area now) and a room with fireplace (now a chapel for Muslims). A front kitchen room had fallen into ruins and was restored in the 1940's. At the present time only the central part and a room on the right of the altar are open to visitors. At the exit of the building is the Well of Mary, where flows a salty water with curative properties. Each year on August 15, Muslims and Christians gather at the shrine to commemorate the Assumption of Mary.

Nearby Ephesus is an odd shrine known as the Grotto of the Seven Sleepers. Said to be a cave where seven Christian youths were kept during the time of Roman persecutions, it is now a popular holy site with Greek Orthodox pilgrims.