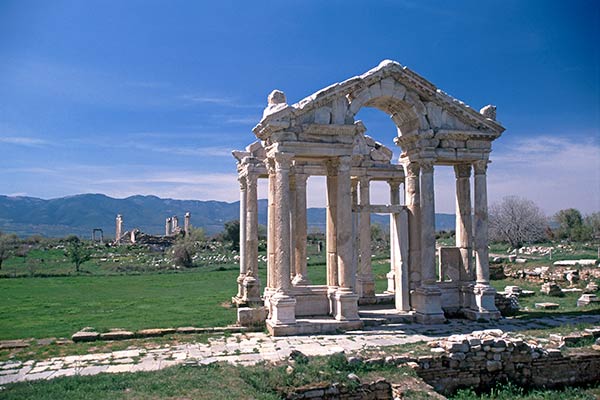 Gateway to the temple of Aphrodite, ruins of Aphrodisias (Enlarge)


Situated amidst rolling hills, 30 kilometers from the town of Denizli in southeastern Turkey, the splendid ruins of Aphrodisias contain what was once the preeminent temple of the goddess Aphrodite in Asia Minor. Yet long before the Greek sanctuary of Aphrodite was constructed in the 1st century BC, the site was a holy place and pilgrimage destination of immense importance to other cultures. Archaeological excavations conducted in 1913, 1937 and 1961 indicate the existence of a settlement since at least the fifth millennium BC, with separate layers identified as belonging to the Chalcolithic, Bronze and Iron ages.

Ancient sources furnish only scant information about the city. According to the Byzantine istorian Stephanus it was founded by the Lelegians and was first known as Lelegonopolis. The name of the city was later changed to Megalopolis, and later again to Ninoe. This name may derive from Ninos, a semi-legendary Babylonian ruler or, more probably, is connected with the Akkadian Nino, Nin or Nina, these being names for the goddess Astarte or Ishtar. The affinities between the cults of Ishtar and Aphrodite are well recognized by scholars and therefore Aphrodisias is quite probably a Greek version of Ninoe. The use of the name Aphrodisias began after the 3rd century BC. The similarities of the goddess Aphrodite to Artemis of Ephesus and other Anatolian mother goddesses are evident in cult statues found at the ruins. In Hellenistic times, she took the form of an ancient nature goddess who was sovereign on the earth, in heaven, and in the oceans and the underworld.

During the Roman period of the 1st to 6th centuries AD, Aphrodisias became a rich and important city, known as a thriving trade center and for the excellence of its school of marble sculptors. Despite the advent of Christianity and the establishment of a bishop in the city, paganism still lingered for some centuries at Aphrodisias because of the great popularity of the cult of the goddess. Under the Byzantines, the city was renamed Stavropolis (Town of the Cross) but the local inhabitants preferred to use Caria, the name of the province (Geyre, the name of the modern village occupying the same site, is probably a corruption of the ancient Caria). When Christianity was made the state religion of the Byzantine Empire, the pilgrimage shrine of Aphrodite gradually declined in importance, to such an extent that the names Aphrodite and Aphrodisias were erased from all inscriptions and sculptures.

As was their habit of ruthlessly destroying the religious sanctuaries of other people, the Christians demolished the beautiful temple of Aphrodite, broke up its many columns and erected a church where the temple had stood. Arab raids, religious disputes, political and economic pressures, and a number of epidemics and earthquakes marked the further decline of the city. Very little is known of the history of the city after the 7th century, sources of information being confined to a few religious documents and lists of the names of the bishops. Archaeological finds appear to point to a short lived revival in the 11th century, followed by the incursion of the Seljuk Turks from Anatolia between 11th and 13th centuries. In 1402 the town was attacked by Tamerlane and then completely abandoned. In the 15th and 16th centuries the fertile soil of the area attracted new settlement and the village of Geyre occupied the site of the ancient city of Aphrodisias.

The name Aphrodisias is derived from Aphrodite, the goddess of nature, beauty, love and plenty, and her temple was one of the most famous cult centers of the goddess in the entire Greek world. As Aphrodite Urania she was the goddess of pure, spiritual love and as Aphrodite Pandemos she was the goddess of sensual love. She was married to Hephaestus but was also the lover of Ares, Hermes, Dionysus and Adonis. Located atop a series of earlier temples, the temple of Aphrodite formed the center of the city. All that remains of the ancient temple consists of fourteen of the over forty Ionic columns that once surrounded its courtyard. This temple was probably begun in the 1st century BC, added to during the reign of Augustus and completed by Hadrian in the 2nd century AD.

The building would appear to have been what is known as an octastyle temple with thirteen columns on each side and eight columns at front and rear. The discovery of several mosaic fragments belonging to the Hellenistic period indicate the existence of an older temple on the same site, but with the conversion of the temple to a church in the 5th century all traces of the older building were destroyed. Directly to the east of the temple of Aphrodite and functioning as its monumental gateway is a grand Tetrapylon constructed during the reign of Hadrian (AD 117-138). The process of repairing and re-erecting the four columns of the Tetrapylon was completed in 1990. The city of Aphrodisias also features an agora, or market area, several buildings that are believed to have been schools, and the finest preserved stadium in the eastern Mediterranean, capable of accommodating over 30,000 spectators.