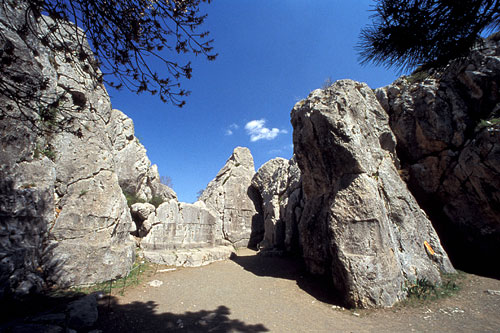 
Situated among low rolling hills, 170 kilometers east of Ankara and adjacent to the small town of Bogazkale, stands the ancient Hittite sanctuary of Yazilikaya. Meaning 'inscribed rock' in the Turkish language, Yazilikaya is an open air, natural rock shrine at a place where a spring of fresh water once flowed. The site has characteristics similar to other Anatolian spring-sanctuaries, and may well have been a place of worship for hundreds or thousands of years before the rise of Hittite power.

Based on finds of stone tools it seems clear that the region of Bogazkale had been settled during Paleolithic times but the first real evidence of occupation dates from the first half of the 3rd millennium BC. From old Assyrian texts and from a later, Hittite, document it is known that a city called Hattush was founded around 1900 BC by the Hati culture. During the second half of the 17th century BC, the Hittites descended from the north and overcame the indigenous Hati people, probably incorporating much of that culture into their own. They conquered the city of Hattush, renaming it Hattusha, and made it the capital of their own empire. The Hittites rapidly became a major power, rivaling Mesopotamia and Egypt. We know from objects of trade, treaties and clay tablet records of their letters that they had contact with Mycenae, Troy and dynastic Egypt. Hattusha remained the capital of the Hittite empire until its mysterious decline around 1200 BC.

It was not until 1909 when archaeologists discovered the city of Hattusha, and its library with thousands of clay tablets, that it was possible to trace these lost people. Excavations of their city revealed a large and powerful culture that was ruled by written laws, had created palaces and fortifications, enjoyed a fixed monetary system, and had developed a religion with its own gods and goddesses. The Hittites were polytheist and together with their own gods and goddesses they also worshipped deities deriving from other Mesopotamian cultures. Records of Hattusili, the first Hittite king who resided at Hattusha, tell of temples dedicated to a sun goddess called Arianna and her daughter Mezulla as well as a weather god named Teshub.

The sanctuary of Yazilikaya lies outside the ancient city of Hattusha, near where a spring issued from the rocks and flowed through a small alcove. Shaded by trees and carpeted with grass and flowers, the power and beauty of the alcove must have inspired the Hittites and earlier peoples to worship there. It is probably that by the 15th -13th centuries BC several temples were built at the site, although crumbling foundations are all that remain to be seen. The principal interest of Yazilikaya, however, lies not in the fallen temple buildings but in the figures of deities carved on the rock walls of the two natural chambers of the roofless sanctuary. The figures in the larger chamber give the impression of two processions, one of male and one of female deities, advancing on either side towards the rear wall, where the principal god and goddess, emphasized both by their positions and by their greater size, meet one another at the focal point of the chamber. The west wall is adorned with reliefs of gods, while those on the east wall are devoted to goddesses.

The division into male and female deities is, however, not absolute; three goddesses may be discerned among the gods and one god is present in the row of females. The goddesses wear long robes, have braided hair and jewelry, and are shown in side view. The gods, mostly wearing short kilts, turned-up boots and pointed hats, are facing forward. It is thought that the number of horns decorating their pointed hats indicates the rank of the gods. The deities' names are often inscribed over their heads. From the deciphered names we find that these deities had Hurrian not Hittite names (the civilization of the Hurrians; a people living southeast of the Hittites had a strong influence on Hittite culture, especially in the 15th to 13th centuries BC).

Amongst the finely carved, though much weathered, relief carvings are found the moon god Kusuh, the weather and storm god Teshuba, the earth goddess Hepat, and Sharumma, the son of Teshuba and Hepat. Versions of Teshuba, the weather god, are found throughout the ancient Middle East, under a variety of names (the Babylonian Marduk, the Assyrian Adad, and the Canaanite Baal) All told, the reliefs in the grand chamber consist of 64 figures and represent 63 deities of the Hittite pantheon. The smaller chamber contains a deity called by archaeologists the "sword god" thought to represent the Hittite god of the underworld. Remnants of cremations in this area suggest that this part of the sanctuary may have been used for burials of the Hittite royalty. Benches hewn out of the rock beneath some of the reliefs seem to have served for the depositing of offerings. There are also basins and drains for libations carved into the rock. Presumably each chamber was used for different ceremonies, but the exact nature of these rituals is unknown to us.

Archaeoastronomer E.C. Krupp has interpreted the carvings in the two galleries as a cosmic narrative depicting the renewal of creation and the continuity of the Hittite royal line. "Facing Teshub in the central relief in Chamber A is Hepat, the Hurrian earth-mother goddess. As Teshub's bride, she coupled with him to deliver the world's seasonal cycles of birth, death and rebirth. In this depiction, she and Teshub participate in the ceremony of sacred marriage. All of the other gods shown on the chamber's walls have convened to witness and ratify this ritual matrimonial bond between heaven (Teshub) and the earth (Hepat). In this way the Hittites assembled the legion of gods into a huge family headed by the cosmic couple, who joined the fertility of the sky with the fecundity of the earth to perpetuate the world..Yazilikaya, then, was a fertile center of ritual renewal, a mini-mountain love nest where divine nuptials were performed above the Hittite capital. The ceremonies, timed with the New Year, and the vernal equinox, represented the beginning of time through godly pillow talk. But Yazilikaya is more than just a fertility shrine. The gods portrayed there and the ceremonies performed there long ago were not intended just to coax a little fecundity back into the world. Rather, the Yazilikaya rock reliefs are the epitome of Hittite ideological art...Among the gods, the sacred marriage culminates in a conjugal union that defines the hierarchy of cosmic power through divine lineage..When the king and queen ceremonially coupled, they renewed far more than the fruit of the fields. There copulation was political. Impersonating the gods, the king and his paramour renewed their sovereignty through sacramental sex. In heaven and earth, bedroom politics promoted celestial sovereignty and the Hittite royalty identified itself with the highest gods.

To fully appreciate the artistry of the carvings it is necessary to visit the sanctuary at different times of the day, when the sun's light is angled toward specific sections of the chambers. 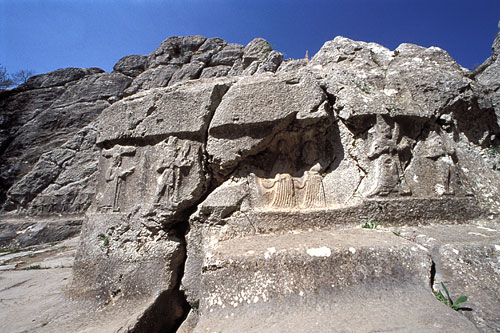