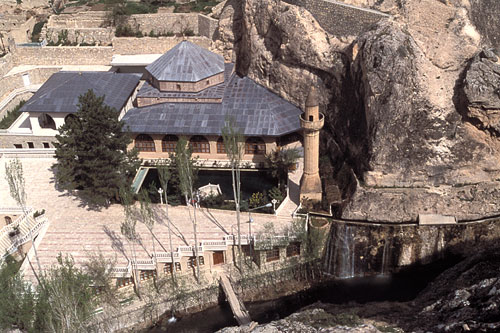 
The shrine of the Sufi saint, Somunca Baba, is located in central Turkey, 80 kilometers northwest of the city of Malatya and 3 kilometers from the small town of Darende. Somunca Baba, also known as Sheikh Hamid-I Wali, was born in the mid 14th century in the village of Akcakaya in Kayseri. When he was a young man he left home to travel to different centers of learning in the Islamic world. Journey from Kayseri, he studied in Damascus, Tabriz and Erdebil. Following his studies in Erdebil, Sheikh Hamid-I Wali went to the city of Bursa where he became a scholar and a baker. He built a bakery next to his hermitage and freely distributed loaves of bread to local people. Because of his sanctity and abundant generosity he was given the name Somuncu Baba, meaning 'Father of Loaf'. After some time as the Imam of the Grand Mosque of Bursa, the Sheikh went upon a pilgrimage to Mecca in the company of his son and other disciples. Following his pilgrimage to Mecca, Somunca Baba came to the small town of Darende and lived the final years of his life near a sacred pool at the foot of high cliffs along the Tohma River. Disciples visited the saint at his simple cell and upon his death in 1412, the site became a pilgrimage shrine. In 1685, the shrine was incorporated into a religious complex of mosque and tombs. The sacred spring, which emanates from a hidden source in the cliff walls and ends at a small pool at the base of the minaret, has a constant temperature of 16 degrees centigrade and is filled with enormous orange fish. Inside the shrine is a reliquary with two hairs of the Prophet Muhammad and the tombs of Somunca Baba and his son HalilTaybi.

Thirty kilometers east of the town of Tunceli in east central Turkey stands the holy mountain of Duzgunbaba. According to local legends the mountain was a sacred place of the Hurrian/Hittite storm god Teshub long before the arrival of Islam. Upon the peak is a cave where lived a Sufi saint, by the name of Duzgunbaba, in the late 13th century. Folklore of the holy place refers to its healing powers and barren women especially favor both the mountain and cave. Pilgrims will spend the night in the cave, hoping that Duzgunbaba will appear to them in dreams. 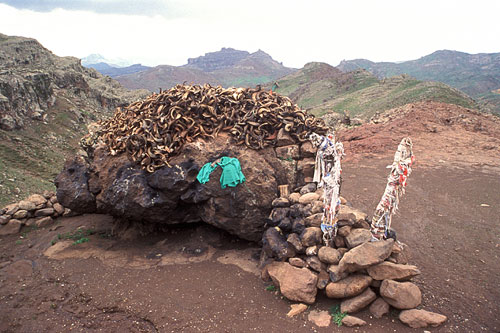