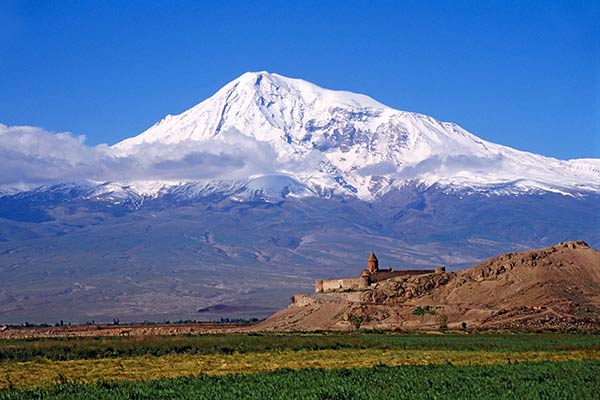 
Mt. Ararat, the traditional resting place of Noah’s Ark, is located in eastern Turkey near the Armenian and Iranian borders. The summit of Mt. Ararat is 5,165 meters (16,946 feet) above sea level. Ararat is a dormant volcano and its last eruption was on June 2, 1840. At present the upper third of the mountain is covered with snow and ice throughout the year. The Turkish name for Mt Ararat is Agri Dagi (which means mountain of pain). Adjoining Mt. Ararat, and 4000 feet lower, is the peak known as Little Ararat. Classical writers considered Ararat impossible to scale and the first known ascent was that of Frederic Parrot, a German physician, in 1829. Prior to the fall of the Soviet Union, Armenia was part of the Russian state and border conflicts between the Turkish and Soviet authorities often made it impossible for climbers to gain access to the mountain. Armenia has now regained its freedom but continuing conflicts with the Turkish government and the Turkey’s own conflicts with local Kurdish tribes have continued to limit further exploration of the great peak. If one is able to gain permission to climb, it is best to start from the Turkish town Dogubayazit on the south side of the mountain. The average climber who is experienced in high altitudes can complete the trek in three days, but it is better to allow four or five days so that exploration of the peak can be included. Late August is the best season for climbing.

Over the years various groups have explored Ararat in the hopes of finding remains of Noah's Ark. Both Josephus in about 70 AD and Marco Polo about 1300 AD mention the Ark’s existence on the mountain, but their reports are based on others' accounts. The story of Noah's ark, as it is told in the Old Testament, is a reworking of an earlier Babylonian myth recorded in the Gilgamesh Epic. The hero of the earlier version is called Utnapishtim. It seems probable that the Babylonian story was based on a devastating flood in the Euphrates River basin, and that the ark in that story was grounded on the slopes of one of the Zagros mountains. According to Old Testament passages, God became so dismayed with the wickedness of the human race that he decided to wipe it out with a cataclysmic flood. Only a man named Noah was to be spared. So God warned Noah to build a boat to house his family and the birds and animals of the earth. Genesis (8:3-4) relates:

And the waters returned from off the earth continually: and after the end of a hundred and fifty days the waters decreased. And the ark rested in the seventh month, on the seventeenth day of the month, upon the mountain of Ararat.

The Bible only mentions Ararat in two other passages (2 Kings 19:37 and Isaac. 37:38), where it makes it clear that it is speaking of a land and a kingdom. The biblical word that we read as "Ararat" could as well be read "Urartu" because the text has merely "rrt" and the proper vowels must be supplied. Urartu was the name of a historical kingdom, but the word also meant "a land far away" and "a place in the north."

There are numerous legends and eyewitness reports of Noah's Ark resting high on Mt. Ararat but so far no real evidence has been found. Only the loftiest heights of the frozen peak are capable of preserving the Ark and perhaps explorers will one day find the boat’s remains beneath the snow and ice. If the ark had landed lower on the mountain, then it would have disappeared long ago due to the natural decomposition of the wood or because it had been hauled away by treasure hunters or mountain folk in search of firewood.

The Biblical references to a great flood and Noah’s ark have remarkable parallels in many other archaic myths found around the world. Greek mythology, for example, tells of a hauntingly similar cataclysmic event. Collecting and recording oral traditions from a far earlier time, Hesiod in the 8th century BC reports that prior to the present creation there were four earlier ages, each of which had been destroyed by geological cataclysms. In the forth of these previous ages, Deucalion was warned by Prometheus of an impending flood and told to fashion a wooden box in which he and his wife Pyrrha could float above the rising waters. After nine days and nights in the boat, Deucalion came to rest upon sacred Mt. Parnasus in Greece and, with the help of Zeus, recreated human beings. As the Hebrews looked back to Noah, so also the ancient Greeks looked upon Deucalion as the ancestor of their nation and as the founder of many towns and temples.

The idea of a great flood (or floods) that devastated human civilization is not simply the product of the robust imagination of the ancient Hebrews and Greeks. These myths may be understood as reports, embellished and altered over the millennia, of real events. In fact, more than 500 deluge legends are known around the world and, in a survey of 86 of these (20 Asiatic, 3 European, 7 African, 46 American and 10 from Australia and the Pacific), the researcher Richard Andree concluded that 62 were entirely independent of the Mesopotamian and Hebrew accounts. Conventional scientific theory, based on incorrect assumptions made in the 1830’s and 1840’s, attempts to explain these flood myths by reference to the known rise in ocean levels that followed the hypothesized end of the last ice age and the melting of the ice caps between 13,000 and 8000 BC.

The idea of an ice age at the juncture of the Paleolithic and Neolithic eras has, however, been shown to be inaccurate. Based on extensive research from the scientific disciplines of zoology, biology, geology, oceanography, climatology, astronomy, anthropology and mythology it has been conclusively shown that there was no ice age, there were no vast glaciers covering large parts of the northern hemisphere, and consequently there was no melting of any ice caps as previously hypothesized. Readers desiring a detailed scientific discussion of this matter are advised to read the book Cataclysm: Compelling Evidence of a Cosmic Catastrophe in 9500 BC, by J.B. Delair and D.S. Allan. While it is certainly true that ocean levels did dramatically rise at this time, by as much as 80-200 feet along different coastlines, that rise was not caused by the so-called slow melting of the ice caps but rather by the massively devastating influences resulting from a large cosmic object passing close by the planet around 9500 BC. This event did, however, cause cataclysmic floods which rapidly destroyed a large percentage of global human population.

Modern researchers such as D.S Allan, J.B. Delair, Graham Hancock, Christopher Knight, Robert Lomas and Rand Flem-Ath have conducted comprehensive studies of the cataclysm myths found around the world and have put forth some surprising – and controversial - theories to explain the extraordinary similarity of those myths. Basically these theories posit two different causes for the great floods and their accompanying geological cataclysms. One cause, initially suggested by the American professor Charles Hapgood, was the crustal displacement of 9600 BC that rapidly shifted – in a matter of days or weeks - enormous portions of the lithosphere (upon which the slowly moving tectonic plates are situated) and resulted in catastrophic earthquakes, volcanic activity and abrupt climate change. This crustal displacement was itself caused by the enormous gravitational influences of the cosmic object (probably a fragment of an exploded super nova) as it passed close by the earth in 9600 BC. Certain myths of great antiquity can only be understood by reference to this event and interested readers may find detailed analysis in the writings of Allan, Delair, Hancock and Flem-Ath.

A second cause may be found in the cometary impacts of 7460 BC and 3150 BC. The earlier impact event, which involved seven distinct cometary bodies simultaneously crashing into seven separate ocean locations around the world, has been calculated to have developed massive waves that washed over and completely devastated almost all human civilizations situated upon or near coastal locations. A large number of ancient myths that report “seven blazing suns speeding through the sky and falling to the earth” may be understood as legendary accounts of these comets. The single cometary strike of 3150 BC, impacting the eastern region of the Mediterranean Sea is probably the event that caused the great floods recorded in the myths of ancient Sumer, Egypt and Greece. Readers interested in studying the fascinating matter of cometary impacts and their devastating effects on earth will enjoy the book Uriel’s Machine by Christopher Knight and Robert Lomas.