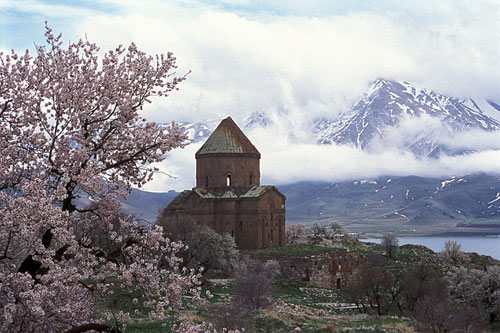 
Breathtaking in the beauty of its surroundings, the ruined church of Akdamar Island in Lake Van represents one of the most sublime examples of Armenian religious architecture. The church is the sole remaining building of the palace of Aght’amar built by the architect Bishop Manuel between 915 and 921 AD. Constructed during the reign of the Armenian King Gagik Ardzrouni of the Vaspurakan dynasty, the complex of buildings originally included streets, gardens and terraced parks surrounding the palace and church. Constructed with a cruciform plan (cross-shaped) and a conical roof domed on the inside, the building is made of red colored tufa stone brought to the island from distant quarries.

Upon the outside walls of the church are extremely beautiful but much weathered stone reliefs by Armenian master carvers. These reliefs depict Biblical scenes with Adam, Eve, Abraham, David and Goliath, and Jesus as well as earthly themes, such as life at palace, hunting scenes and human and animal figures. A remarkable design of vines interspersed with animals carved in high relief encircles the exterior of the church. The manner these themes are worked show an influence of 9th and 10th century Abbasi art, which was itself influenced by Central Asian Turkish Art. Early descriptions and local legends tell that the relief carvings and the door to the church were set with precious stones, pearls and gold encrustations but these have long since disappeared. The interior church walls are decorated with frescoes showing religious themes but vandals and the elements have much degraded these once lovely paintings.

The name given to the island, Aght'amar, is explained by a local legend. A nobleman who fell in love with a beautiful girl named Tamar visited the island every night to see her. As he was crossing the lake one stormy night, his boat capsized and fighting the waves, he drowned uttering the words "Ach Tamar". Tamar, awaiting the arrival of her loved one, grieved deeply upon hearing the news of his death and died soon after. Hence, the island was called "Ach Tamar" (Aght'amar) ever since. Local folklore also tells that the lake is enchanted and that angels go in and out of the water. The island lies close to the shore Lake Van (Turkey’s third largest lake) and is approximately 55 kilometers from the city of Van. In the springtime, when the island’s trees are blooming with fragrant flowers, the island is a place of truly enchanting beauty.

An intriguing matter which few people know about Lake Van is that, at 1670 meters above sea level, it is a salt lake. Other large bodies of water in the same general region, including Lake Urmia (at 1250 meters above sea level), the Caspian Sea (the largest landlocked body of water on the entire planet), and the Aral Sea (480 kilometers east in the countries of Kazakhstan and Uzbekistan) are also salt lakes, and yet there are no appreciable salt layers bordering any of these lakes in the local geological strata. The Caspian Sea also contains porpoises and seals, animals which are normally only found in marine environments. The existence of these high altitude salt lakes and their unusual marine life so far inland from ocean environments is a perplexing mystery to orthodox scientists. Certain ‘unorthodox’ scholars, however, (for example Christopher Knight and Robert Lomas, writing in Uriel’s Machine) have gathered evidence which suggests that these bodies of water are each of relatively recent geological origin, dating to around 7640 BC and the seven cometary objects known to have impacted the earth at that time. Why this is so fascinating is that these cometary impacts were all in ocean locations and are known to have initiated massive waves that flooded great areas of land far inland from the actual sites of the cometary impacts. One of the seven impacts was in the Persian Gulf region roughly 800 kilometers south of the region with the enigmatic salt lakes. Considering the strange occurrence of great landlocked, seawater lakes deep within the continental landmass and the unexplained existence of ocean mammals in the lakes, it is safe to say that the probably explanation was that both the water and the mammals were deposited there by the massive flooding caused by the 7640 BC cometary impacts. 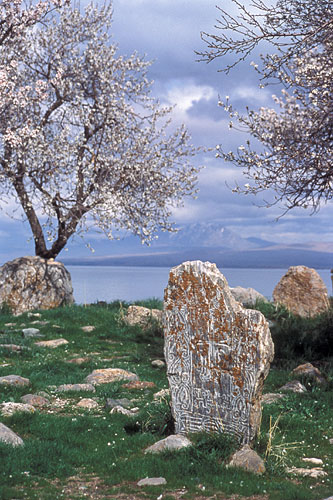