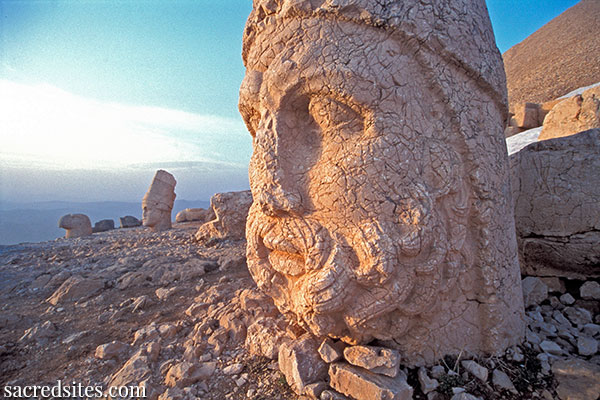 
Rising 2150 meters from the Anti-Taurus mountains in south central Turkey stands the archaeological site of Nemrut Dagi (pronounced NEHM-root dah-uh). Thought to be the burial tumulus and Hierotheseion (Holy Seat) of the 1st century BC Commagene king, Antiochus I Epiphanes, the site is as awe inspiring as it is enigmatic.

The unique mountain top shrine was unknown to all but local herders until its discovery in1881 by a geologist in the employ of the Ottoman government. Archaeological excavations in 1953 by the American School of Oriental Research have conducted precise surveys of the site and instituted a preservation program but have provided little insight into the either the methods of construction or ancient use of the strange rock hill and its temples.

History records that the kingdom of Commagene was situated on the border of the Seleucid Empire (which followed the empire of Alexander the Great in Anatolia) and the Parthian Empire. In 80 BC, with the Seleucid Empire weakening, the governor of Commagene declared his kingdom's independence. Soon thereafter, a Roman ally named Mithridates I Callinicus proclaimed himself king, set up his capital at Arsameia, and began the short-lived Commagene dynasty. Mithridates died in 64 BC and was succeeded by his son Antiochus I Epiphanes who ruled for 26 years. Commagene was thereafter ruled from Rome or by puppet kings until 72 AD when it was fully incorporated in the Roman Empire.

During the reign of Antiochus, the naturally occurring mountain top of Nemrut Dagi was extensively contoured, capped with a soaring conical peak, and graced with two temple compounds and many beautiful stone sculptures. The conical tumulus rises 50 meters above the temples, is 150 meters in diameter and is composed of countless thousand fist-sized pieces of white limestone. Archaeologists, assuming the tumulus enshrines the burial remains of Antiochus, have tunneled into the great cone of rocks but found nothing to substantiate their assumptions. The purpose of this massive undertaking remains a mystery.

The tumulus is bounded on the east, west and north by three courts, each hewn from the living rock. The east court contains a large terrace, five colossal statues, a pyramidal fire altar and the remains of several walls. Rock sculptures adorning the eastern walls depict the Persian and Macedonian ancestors of Antiochus. The statues, reaching a height of 8 - 10 meters each, incorporate several deities, following the principle of syncretism. The five statues represent:

The row of statues on the western terrace depict the same deities and there are also reliefs showing King Antiochus shaking hands with Apollo-Mithra-Hermes, with Zeus-Oromasdes, and with Herakles-Ares-Artagnes. The heads of all the statues on both the eastern and western terraces have fallen to the ground, most probably as a result of the earthquakes that plague the region.

Among the carved stones on the western terrace, one known as the 'Lion of Commagene' bears significant astronomical information. Nineteen stars may be seen in the background of the relief and on the lion's body, a crescent moon is shown on the lion's neck, and above the lion's back are three planets named as Mars, Mercury and Jupiter. This relief has been interpreted (by archaeoastronomers using the Skyglobe computer program) to indicate a date of July 6th on either 61 or 62 BC. Different opinions exist as to the significance of this date. Professor Otto Neugebauer of Brown University believes it is date when Antiochus was set on the throne by the Roman general Pompey, while Adrian Gilbert (writing in Signs in the Sky) sees it as an esoteric coronation of Antiochus as head of secret Persian/Anatolian brotherhood. 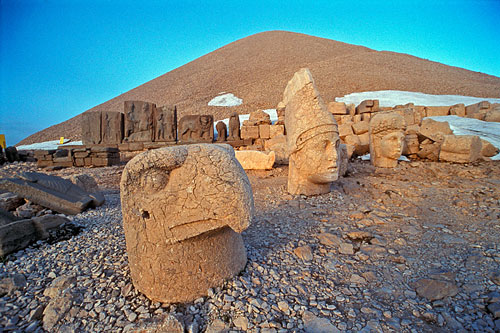 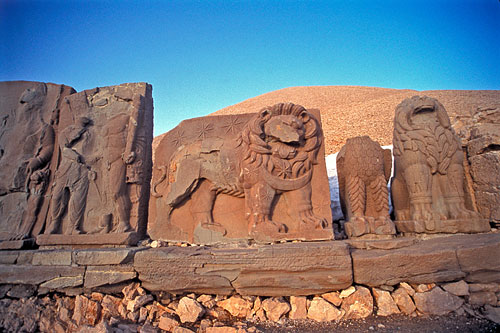 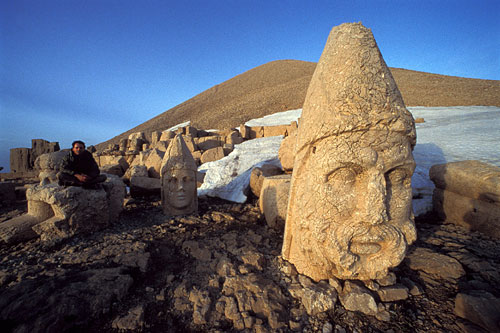 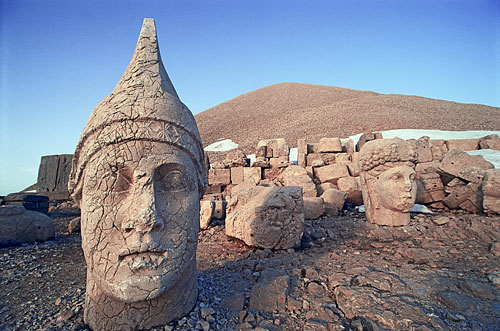 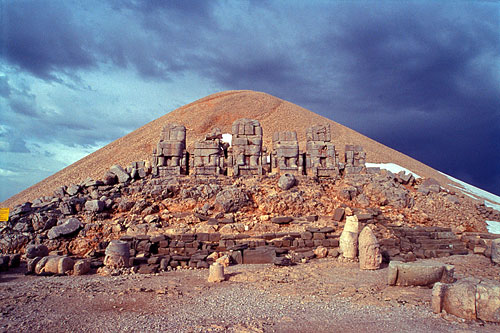 The strange peak of Nemrut Dagi