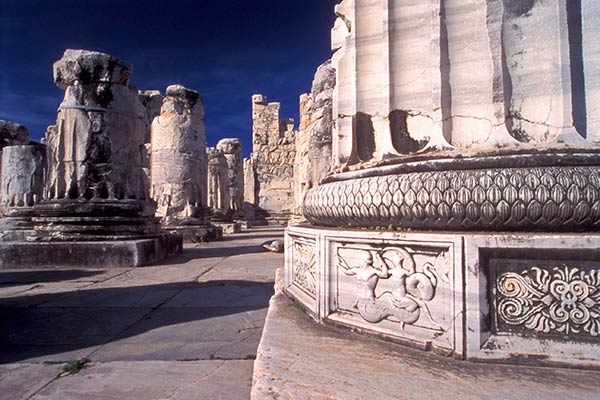 Hidden among rolling hills only a few miles from the scenic coast of southeastern Turkey, the ancient site of Didyma is famous from legendary times. Here was a natural spring where the beautiful Leto is supposed to have spent an hour of love with Zeus, then giving birth to the twins Artemis and Apollo (didymoi in Greek). The most important oracle site in Asia Minor, its pronouncements to Croesus, Alexander the Great and other great kings altered the course of human history.

Didyma was originally a pre-Greek cult sanctuary centered around a sacred grove and holy spring. The remains of the earliest temples, which lie within and beneath the later buildings, have been dated to the 8th and 7th centuries BC. These consist of a walled enclosure measuring approximately 24 x 10 m, an open-air sanctuary, a portico 16 m in length, a sacred well and a votive altar. By the 7th century BC, the Ionian Greeks had adopted the site, dedicated it to the worship of Apollo, and the fame of its oracle had spread across the eastern Mediterranean and into Egypt. The earliest temple of Apollo at the site was an unroofed Ionic building enclosing the sacred spring, laurel trees and a small inner temple. These structures were completed about 560-550 BC when the site was in charge of a family of priests known as the Branchids, the descendants of Bronchos, a youth beloved of Apollo. The cult statue in the Didyma temple dated from 500 BC, was made of bronze and depicted Apollo Philesios seizing a deer. The temple was located approximately 10 kilometers south of the city of Miletus, inland from the small port of Panormos. In the Archaic period, when the first temple of Apollo was constructed, a Sacred Way, lined with sculptures, sarcophagi and statues of lions and sphinxes, led from Panormos to the sanctuary. Pilgrims arriving by sea would disembark at the port of Panormos and walk the Sacred Way to the oracle of Apollo.

The Persians destroyed a second and larger temple at the same site in 494 BC. while it was still under construction. Little is known about activities at Didyma during the 5th and 4th centuries BC. and it seems to have suffered a decline. After his capture of the city of Miletus in 334 BC, Alexander the Great placed the administration of the oracle in the hands of the city. The sanctuary of the oracle was revived in 331 BC when the sacred spring was rediscovered on the occasion of a visit from Alexander (during which time the oracle proclaimed him “the son of Zeus”). In the following decades Seleucus embellished the sanctuary and commissioned the new Hellenistic Temple of Apollo (about 300 BC the cult statue of Apollo that had been stolen by the Persians was returned to Didyma). The sanctuary grew in fame, attracting thousands of pilgrims from throughout the Hellenistic world, and work on the temple continued for the next 200 years. This temple, measuring 51 by 110 meters, was the third largest structure of the Greek world, being exceeded in size only by those at Ephesus and Samos. Although the Hellenistic Didymaion was of greater dimensions than the archaic temple, it was merely an adaptation of the original plan. The massive temple had a total of 124 columns (many of which were never erected) and was embellished with the most wonderful sculptures of Greek artistry. One particularly enormous column weighs 70 tons.

In 278 BC the sanctuary suffered under the raids of Gauls, but construction work on the temple was resumed. In 70 BC pirates sacked the sanctuary and work on the temple was terminated. The sanctuary, however, continued to function and in AD 100. Trajan commissioned a new paved road to the sanctuary from Miletus. By the 3rd century AD Christianity had become well established in the Miletus area and the sanctuary at Didyma fell gradually into disuse. In 262 AD the Apollonian Oracle temple (which had never been completed, despite five centuries of service), was converted into a fortress against invading Goths and Saracens. In 385 AD, the famous oracle, second only to that of Delphi in Greece, was officially closed by an edict of Theodosius and a Byzantine church was erected within temple compound. The buildings were ravaged by fire and in the 15th century a great earthquake reduced the temple to rubble, toppling all but three of its towering columns.

The French first began excavations at the Temple of Apollo in 1834, followed by the Berlin Museum from 1904 to 1913, and then by the German Archaeological Institute from 1962 until the present.

The Temple of Apollo at Didyma was preeminently famous as an oracle site. What exactly stimulated the oracular and visionary insights experienced by the temple priests is not currently known but geologists assume it had something to do with the temple’s location at a place of geologic activity and its construction directly upon an active spring. Recent geological studies at the oracle of Delphi have confirmed that vision-inducing vapors did indeed rise from fissures beneath its Apollonian temple yet similar studies have thus far not been conducted at the shrine of Didyma. The way in which the Apollonian oracles communicated their pronouncements is also not clear from either legendary or historical sources. It seems probable that, similar to Delphi in Greece, there were those who received the oracular messages and those who then communicated and interpreted those messages to the supplicants and pilgrims visiting the temple. It is clear that male priests were concerned with the communication of the prophetic messages but whether males or only females (like at Delphi) were the prophets is not currently known.

Other important oracle shrines in the Mediterranean region include those at Dodona and Delphi in Greece, Claros in Turkey (with its temple built directly upon a spring), and Siwa in Egypt. The sites of Delphi and Siwa are illustrated and discussed elsewhere on this web site. For readers interested in a more detailed study of ancient Mediterranean area oracles, consult the The Mystery of the Oracles by Philipp Vandenberg.