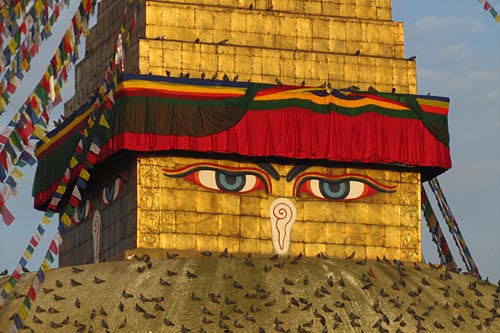 
Boudhnath Stupa, located roughly 5 kilometers to the east of the center of Kathmandu, is the largest and most important Buddhist holy place in all of Nepal. Similar in appearance to the hilltop Swayambhunath Stupa in the western part of the Kathmandu, Boudhnath is popular with both pilgrims and foreign tourists.

While it is impossible to say with any certainty when the site first became a sacred place, there are three legends that give some indication of the antiquity of the place. According to one Tibetan text a daughter of Indra (the Hindu God of War, Storms, and Rainfall) stole flowers from heaven and was exiled to earth as a poultry man’s daughter. While on earth she prospered and decided to use her wealth to build a monument to honor a mythical Buddha of an earlier age. She asked for land from a local ruler, who cynically gave her only as much land as could be covered by the hide of a buffalo. Undeterred, she cut the hide into extremely thin strips, which when tied together enclosed a large area upon which she was able to erect a temple.

Another legend tells of a great drought that struck Kathmandu during the early 5th century reign of the Lichhavi king, Vishvadeva. When court astrologers advised that only the sacrifice of a virtuous man would bring rain, King Vishvadeva told his son Manadeva to go to a royal well on a moonless night and behead the shrouded body he would find there. Manadeva followed this order, only to find to his horror that he had sacrificed his own father. When he asked the goddess Bajra Yogini of Sankhu how to atone for his sin, she let fly a bird and told him to erect a stupa at the place where it landed, which was the site where Boudhnath is now located. 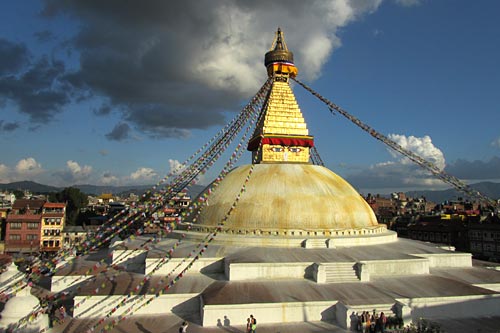 
Still another legend relates that the first stupa at Boudhnath was built sometime after 600 AD, when the Tibetan King, Songsten Gampo, converted to Buddhism. The king constructed the stupa as an act of penance after unwittingly killing his father. Unfortunately, Mughal invaders destroyed this stupa in the 14th century, so the current stupa is a more recent construction.

Whatever the actual date of its construction, the stupa most probably contains the relics of a Buddhist sage, perhaps parts of the Buddha’s body (bones, teeth), or sacred texts and other ceremonial objects. The stupa is built on a massive three level mandala style platform and is 36 meters (118 feet) in height. Around the base of the stupa are 108 small images of the Dhyani Amitabha Buddha and a ring of prayer wheels, set in groups of four or five into 147 niches. Thousands of pilgrims circle the stupa in a clockwise direction each day, many of which spin every prayer wheel. It is said that each spin of a prayer wheel is the equivalent of reciting the mantra embossed on it eleven thousand times. Walking one circuit of the stupa and spinning each of the 147 wheels thereby equals 1,617,000 prayers, and because some pilgrims circle the stupa several times a day every day of the year for years on end their prayers are expressed literally billions of times. 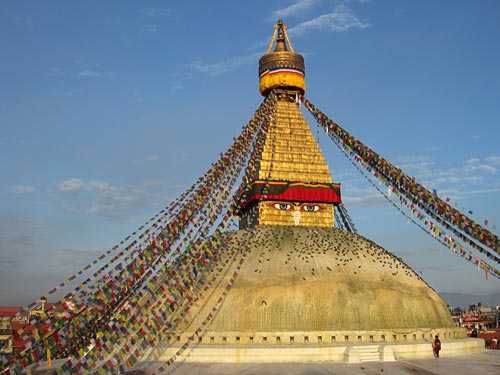 
There are many complicated rules governing the layout of Buddhist stupas. The Lonely Planet guidebook for Nepal explains that each part of a stupa has a specific significance, creating a three-dimensional representation of important elements of Buddhist philosophy to remind devotees of the path towards enlightenment. Key features of stupa architecture include the following:

PLINTH. The lowest level of the stupa is a square or terraced plinth, representing the earth. The four sides or four terraces represent the four states of mindfulness and the four immeasurables – love, compassion, joy and equanimity.

KUMBHA. Above the plinth is a hemispherical dome, resembling an upturned pot of rice (kumbha literally means ‘pot’). The dome symbolizes water and is freshly whitewashed each year and decorated with a pattern of yellow paint to represent lotus petals.

HARMIKA. Above the dome is a square tower, symbolizing fire, usually painted on each side with the eyes of the Buddha.

SPIRE. Topping the harmika is a tapering spire, representing the air. The 13 levels of the tower represent the 13 stages that a human being must pass through to achieve nirvana.

UMBRELLA. At the very top of the stupa is a protective umbrella that symbolizes the void beyond space. 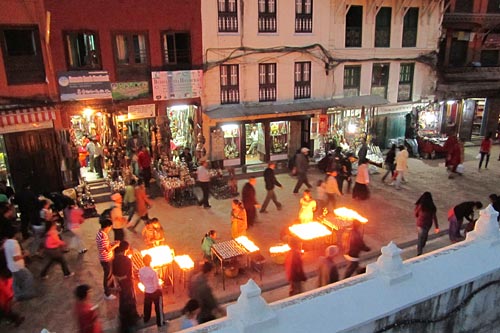 
Tibetans call Boudhnath Chorten Chempo, meaning ‘Great Stupa’ and it is famed throughout the Himalayan region for its powers of wish fulfillment and blessing. The best times to visit Boudhnath, which is a UNESCO World Heritage site, is in the late afternoon and early evening when hundreds of Buddhist pilgrims stroll peacefully around the stupa spinning the prayer wheels and chanting sacred mantras. On evenings of the full moons the plaza surrounding the stupa is brightly lit by thousands of butter lamps.

For an especially intense experience of the sanctity of the place, visit during one of the several great pilgrimages. These include the Tibetan New Year’s festival of Losar in February or March; the Buddha’s birthday on Buddha Jayanti during the full moon of April-May, when an image of the Buddha is paraded around the stupa on an elephant; and the full moon of March-April, when ethnic Tamangs – the original guardians of the stupa – come to arrange marriages and hundreds of eligible brides sit around the stupa for inspection by prospective husbands.

Private family homes, monasteries, and numerous shops selling Tibetan drums, ceremonial horns, statues, and other ceremonial items surround the enormous stupa. Atop several of the encircling buildings are small restaurants that offer splendid views of the stupa. There are also a number of smaller stupas and monasteries in the area of that may be visited. Some of these monasteries welcome foreign students and its common to see Westerners in maroon colored robes as you walk around the backstreets. 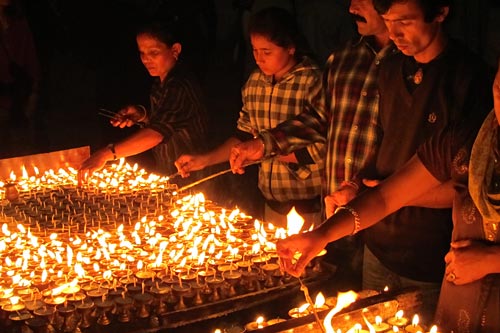 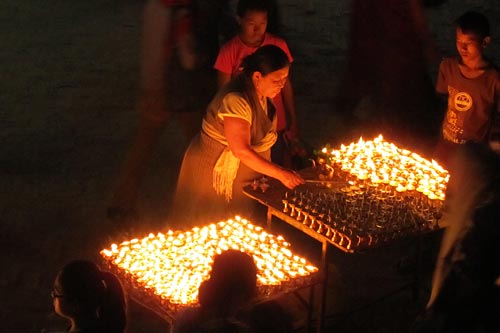 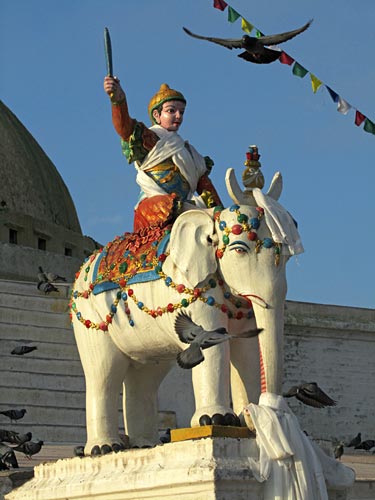 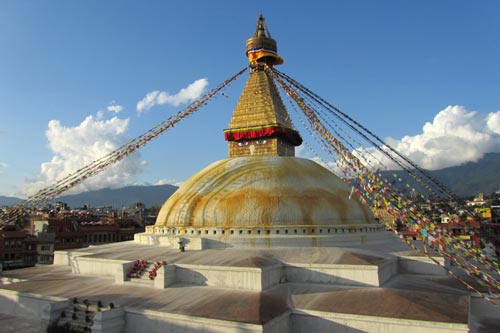 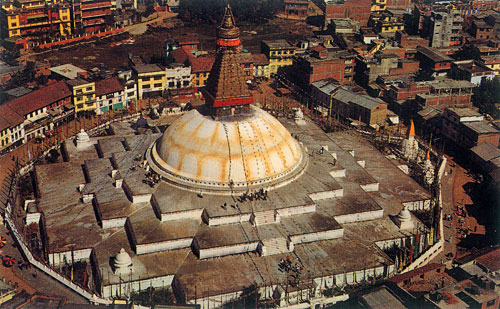