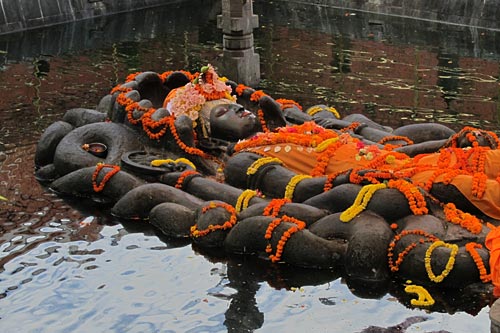 
The Budhanilkantha statue of the Hindu god Vishnu, located approximately 10 kilometers from the center of Kathmandu at the base of the Shivapuri Hill, is the largest and most beautiful stone carving in all of Nepal. It is also the most enigmatic.

Carved from a single block of black basalt stone of unknown origin, the Budhanilkantha statue is 5 meters in length and it lies in a reclining position inside a recessed tank of water (representing the cosmic sea) that is 13 meters in length. Called the Sleeping Vishnu, or Jalakshayan Narayan, the statue depicts the deity reclining on the twisting coils of the cosmic serpent Shesha (Shesha is the eternal, multi-headed king of the serpent deities known as Nagas, and also is the servant of Vishnu). Vishnu’s legs are crossed and the eleven heads of Shesha cradle his head. Vishnu’s four hands hold objects that are symbols of his divine qualities: a chakra or disc (representing the mind), a conch-shell (the four elements), a lotus flower (the moving universe) and the club (primeval knowledge). 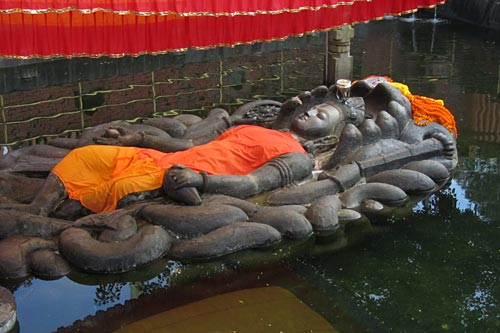 
Budhanilkantha literally means “old blue-throat’ and how it got that name is fascinating, as explained by the excellent Rough Guide to Nepal:

“Budhanilkatha’s name has been a source of endless confusion. It has nothing to do with the Buddha (budha means “old”, though that doesn’t stop Buddhist Newars – a particular sect of Nepalese Buddhists - from worshipping the image). The real puzzler is why Budhanilkantha (literally “Old Blue Throat”), a title which unquestionably refers to Shiva, has been attached here to Vishnu. The myth of Shiva’s blue throat, a favorite in Nepal, relates how the gods churned the ocean of existence and inadvertently unleashed a poison that threatened to destroy the world. They begged Shiva to save them from their blunder and he obliged by drinking the poison. His throat burning, the great god flew up to the range north of Kathmandu, struck the mountainside with his trident to create a lake, Gosainkund, and quenched his thirst – suffering no lasting ill effect except for a blue patch on his throat. The water in the Sleeping Vishnu’s tank is popularly believed to originate in Gosainkund, and Shaivas claim a reclining image of Shiva can be seen under the waters of the lake during the annual Shiva festival there in August, which perhaps explains the association. Local legend maintains that a mirror-like statue of Shiva lies on the statue’s underside.”

Two old stories offer differing explanations of the origin of the Budhanilkantha statue. One says that the statue was sculpted and brought (by devotees or forced labor) to its current location in Kathmandu during the reign of the seventh-century monarch Vishnugupta, who controlled the Kathmandu valley under the Licchavi king Bhimarjunadev. 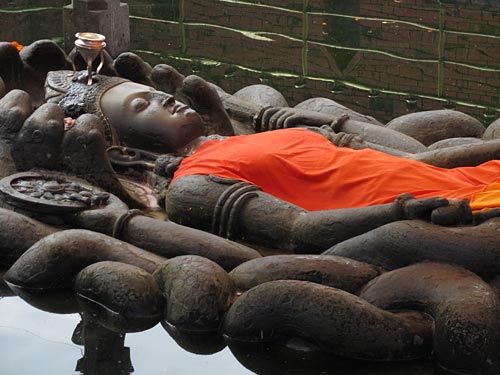 
An alternate legend relates that in times past a farmer and his wife occupied a farm in an (unspecified) area and while cultivating the land they struck the Deity. Immediately afterwards blood began to flow from the ground and thus the lost deity of Budhanilkantha was recovered and placed in its rightful position.

Whatever the actual source of the statue and the time of its creation, it is known that for much of its history it was considered a representation of Vishnu. This is understandable, given the fact that the main sect of Hinduism in Nepal was Vaishnavism, or the worship of Vishnu. At different times, however, for example in the 12th and 13th centuries of the Malla Dynasty, when Shiva became the most popular deity, the Budhanilkantha was not so revered.

In the late 14th century, the Malla king Jayasthitihi (1382–1395) is credited with reviving the Vishnu cult by claiming to be the latest incarnation of this often-incarnated god. Subsequent kings of Nepal, most notably Pratap Malla (1641-1674) have made the same claim. According to a story originating from this time, Pratap Malla had a prophetic vision, which resulted in his strong belief and fear that should the King of Nepal visit the Budhanilkantha temple, death would be imminent upon his departure. Continuing to this day the Hindu Kings of Nepal will not visit the temple. The devotional practice of other Hindus is to approach Vishnu’s feet and, after touching them, make prayers and/or give thanks to the god (but it is forbidden for foreign visitors to do this).

Budhanilkantha has become the site on which Haribondhini Ekadashi takes place during the 11th day of the Hindu month of Kartik (October – November). Attended by many thousands of pilgrims, it is the principle festival for the year in celebration of the awakening of Lord Vishnu from his long sleep.

It is interesting to note that two other examples of the enormous stone carvings of the Sleeping Vishnu exist in the city of Kathmandu. One, which may be viewed by the general public, lies five kilometers northwest of the city center in the Balaju Gardens. The other, which may not be viewed by the public, is at the Royal Palace. 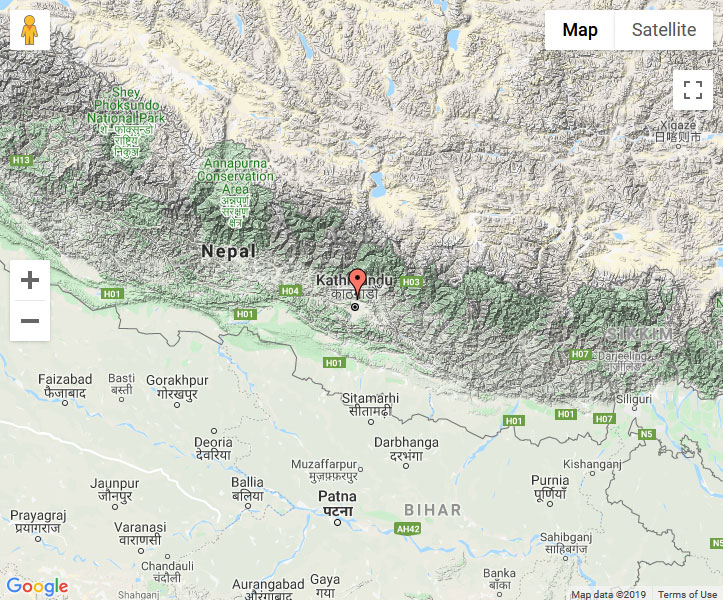