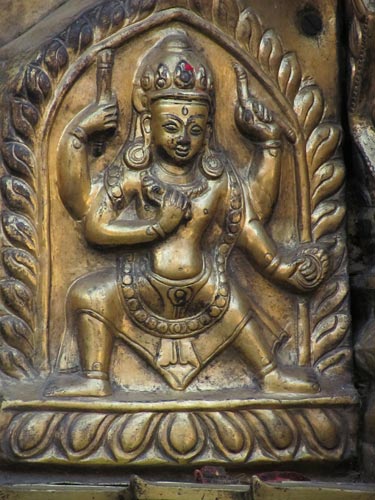 
The hilltop temple of Changu Narayan, located 4 kilometers north of Bhaktapur, is the oldest Vishnu shrine in Kathmandu Valley. Founded as early as 325 AD, it is one of Nepal’s most beautiful and historically important structures. Reconstructed in 1702 following its destruction by fire, the two-storey temple has many intricate carvings of the ten incarnations of Vishnu and different multi-armed Tantric goddesses. Changu Narayan’s true gems, however, are the Lichhavai period (4th to 9th centuries) stone, wood, and metal carvings in the courtyard surrounding the main temple.

Apart from the main temple there are other shrines dedicated to Shiva, Chinna Masta (Kali), Ganesh and Krishna found in the courtyard. A pilgrimage to the temple of Chinna Masta, considered to be the mother goddess worshipped at the site in prehistoric times, is held here each year in the Nepali month of Baisaakh (April-May).

The Changu Narayan Temple is one of seven structures cited by UNESCO as demonstrating the historic and artistic achievements that make the Kathmandu Valley a World Heritage Site.