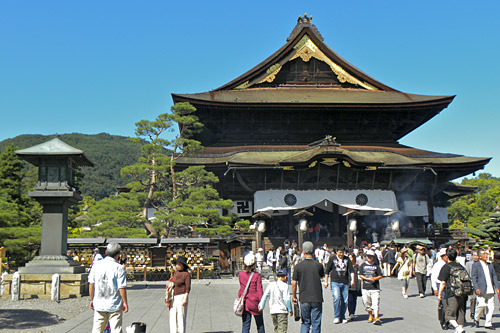 
Located in the west central region of the island of Honshu, the city of Nagano is for most non-Japanese people known as the site of the 1998 Winter Olympics. For the Japanese, however, Nagano is more famous for its great pilgrimage shrine, the temple of Zenkoji, which is visited by several million pilgrims each year.

According to the Zenkoji Engi, an early history of the Zenkoji Temple, the first Buddha image in Japan was brought there in 522AD, from the Kingdom of Kudara in Korea. Called the Ikko Sanzon, or the Amida Tathagata statue, it is the temple’s most revered object.

Wrapped like a mummy and stored in a box behind the main altar, the statue is known as a Hibutsu, this being a secret Buddha, and it is perpetually kept hidden from the public eye. The commandments of the temple require the absolute secrecy of the statue, prohibiting it from being shown to anyone, including the chief priest of the temple. 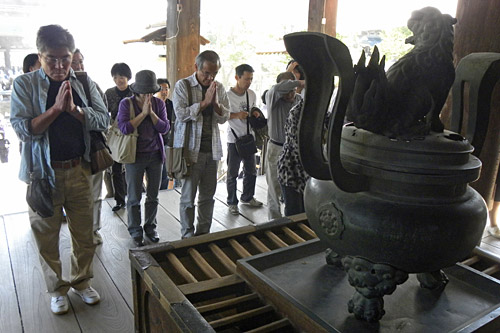 
Legends tell that no one has seen the statue for 1000 years and that even 37 generations of Japanese emperors had not been allowed to view it. In 1720, however, in order to quell rumors that the box was empty, the Shogunate ordered a priest to confirm its existence. That priest, so the telling of the story goes, remains the last confirmed person to have seen the statue. However, a replica of the statue, called Zenritsu Honzon, has been made which may be shown publicly once every six or seven years, in a ceremony called Gokaichō. The most recent display of this copy of the Hibutsu took place in 2009.

The real statue has quite a history. It is known that it became an object of dispute between two feuding clans and was thrown into the Naniwa no Horie canal, during a war over whether Japan should embrace Buddhism or not. Rescued from the canal by Yoshimitsu Honda, from the province of Shinano (now Nagano prefecture), it was first enshrined in his home in 642. The shrine was called Zenko, from the Chinese reading of Yoshimitsu’s name, and this is the name it has continued to be called over the succeeding centuries.

The original site of a larger temple to house the statue, (which soon became known as a Hibitsu, or hidden icon), was south of its current location, off what is now the busy shopping street of Nakamise-dori. However this temple was destroyed numerous times by fires originating in nearby homes and businesses – and was then rebuilt each time with donations from believers around the country. 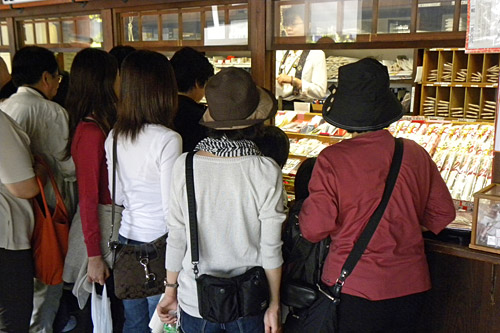 In the Sengoku period (the mid-15th to 17th century; also called the Warring States period, because of its similarity to the Dark Ages in Europe), when the Zenkoji became embroiled in the struggles between Uesugi Kenshin and Takeda Shingen, the chief abbot of the temple was afraid it would again be burnt to the ground. He built a new Zenkoji in what is now Kofu, near where it stands today. There was however, a brief time during the Sengoku period when the statue was moved for some years to another location by the great warrior-leader Toyotomi Hideyoshi (1536-1598). It was moved to the holy city of Kyoto, and then to Shinano, before being returned to Nagano. Finally, during the Tokugawa Shogunate of the Edo period (1603-1868) it was decreed that the temple be moved to its present, safer location. The current building dates from 1707 and is 30 meters in height, 24 meters in width, and 54 meters in depth, making it one of the largest wooden buildings in all of Japan. During the Meiji Era – meaning ‘Enlightened Rule’ (1868-1912) pilgrims often spent the entire night in the temple. Until 1908 nightly rituals kept Zenkoji bustling with pilgrims chanting all through the night.

Zenkoji’s great popularity stems partly from its liberal welcoming of believers from all Buddhist sects, including women, and its chief officials are both a priest and a priestess. It is interesting to note that because the temple was founded before Buddhism in Japan was split into several different sects, it belongs to both the Tendai and Jodo Shu schools of Buddhism, and is co-managed by twenty-five priests from the former school, and fourteen from the latter. 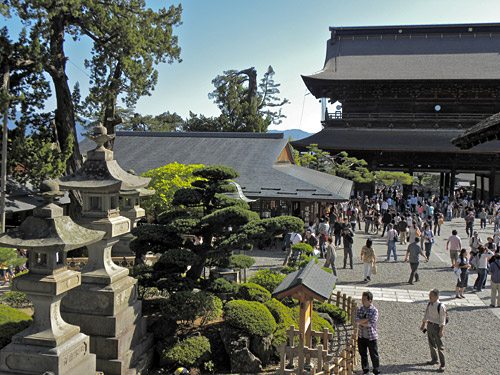 Visitors enter the large temple complex from Nakamise-dori Street, through the massive Nio-mon and Sanmon gates. In the main hall of the temple, the Ikko-Sanzon image is in an ark to the left of the central altar, behind a dragon-embroidered curtain. To the right of the altar, visitors may descend a staircase to the Okaidan, a pitch-black tunnel that symbolizes death and rebirth, and which provides the closest access to the hidden statue. In this corridor worshippers try to touch a metal key hanging on the right side of the wall in order to gain enlightenment. The metal key represents the Key to the Western Paradise of the Amida Buddha. (1)

It is worth arriving at the temple shortly after it opens to observe the morning services and the Ojuzu chodai, in which the priest or priestess touches Buddhist holy beads to the heads of all who line up.

Just inside the front door of the main temple stands a one-meter tall wooden statue of Binzuru, a physician who was said to be Buddha's follower and one of the sixteen disciples who vowed to stay behind in this world. He was due to become a Bodhisattva (2), and go to the land of the immortals, but the Buddha had instructed him to remain on earth and continue to do good works. Visitors to the temple touch the statue of Binzuru in the belief that he can cure the diseases of afflicted persons who touch his image. The surface of the statue is worn smooth by the millions of visitors who have touched it with the hope that it will heal ailments of the corresponding parts of their own bodies. While the face of the statue is quite worn, it is still easy to see its form.

Directly in front of the Zenkoji there is a two-meter tall metal incense burner, and visitors rub the incense smoke on their bodies for good health and fortune. In the early mornings a high priest or priestess holds blessing ceremonies here.

Zenkoji’s pigeon population is famous, making the Rattan hatto-gurama (wheeled pigeon) a favorite Nagano souvenir. Locals claim the birds forecast bad weather by roosting on the Sanmon gate. Many visitors claim to also see five white doves in the plaque above the central portal, and the five short strokes in the characters of Zenko-Jo do look remarkably dove-like.

The large Niomon gate at the entrance of the temple complex features two impressive Deva guardians, which are said to protect the Zenkoji temple from enemies of Buddhism.

(1) In the scriptures of the Mahāyāna school of Buddhism. Amitabha is the principal Buddha in the Pure Land sect, a branch of Buddhism practiced mainly in East Asia. According to these scriptures, Amitābha possesses infinite merits resulting from good deeds over countless past lives as a Bodhisattva named Dharmakaya. "Amitabha" is translatable as "Infinite Light," hence Amitabha is often called "The Buddha of Infinite Light."

(2) In Buddhism, a Bodhisattva means either "enlightened (bodhi) existence (sattva)" or "enlightenment-being" or, given the variant Sanskrit spelling satva rather than sattva, "heroic-minded one (satva) for enlightenment (bodhi)." Another translation is "Wisdom-Being." It is the name given to anyone who, motivated by great compassion, has generated bodhicitta, which is a spontaneous wish to attain Buddhahood for the benefit of all living beings. 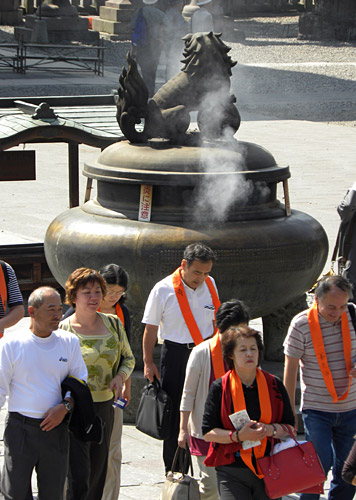