Sacred Sites and Pilgrimage in Japan 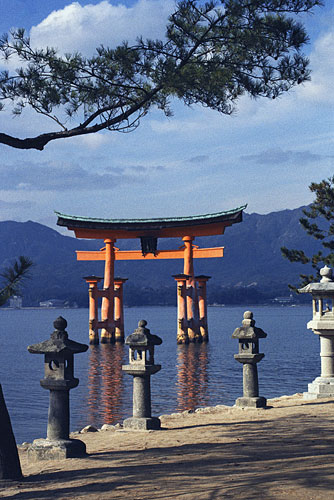 
The sacred places and pilgrimage traditions of Japan have been conditioned by geographical and topographical features as much as by religious and cultural factors. Over 80% of the Japanese countryside is hilly or mountainous terrain. This physical condition gave birth in ancient times to a unique and enduring tradition of religious beliefs and practices focused on mountains. While never systematized, this tradition was so wide spread that Japanese scholars have termed it sangaku shinko, meaning 'mountain beliefs' or 'mountain creed'. Sangaku shinko should not however, be thought of in the narrow sense of mountain worship, but rather understood to have a broader meaning which includes the mythology, folk beliefs, rituals, shamanistic practices, and shrine structures that are associated with the religious use of particular mountains. H. Byron Earhart, a scholar of Japanese religion, writes that "Most of the mountains whose sacred character is attested by archaeological evidence are also prominent in the earliest written records of Japan. In these writings mountains play a religious role in the cosmogony and theogony of the formal mythology and are prominent as dwelling places of the gods, as burial sites, and as sacred sites of great beauty. In the two court compilations which represent the earliest writings in Japan (Kojiki, compiled AD 712 and Nihon shoki, compiled AD 720), mountains appear in almost every imaginable religious guise".

A general explanation for this intense deification of mountains in Japan may be found in the characteristics of mountains as opposed to plains. Human activity took place for the most part on the plains, while the mountains were a mysterious and seldom visited other world. The awesome height, strangeness of terrain, and danger of entry into the mountains inspired in the human mind an attitude of reverence and adoration. A more incisive explanation for the early sanctification of certain mountains however, may be found in the beliefs of Shintoism, the indigenous, shamanistic religion of Japan. Shintoism viewed each and every natural object - trees, rocks, springs, caves, lakes, and mountains - as the abode of spirits called kami. These kami spirits were believed to exercise a powerful influence on human affairs, while human beings, through the agency of prayer and ritual, were likewise able to influence the kami spirits. The kami spirits were especially concentrated in mountain areas and we may discern two major categories of sanctified mountains in early Shinto.

One category concerns mountains revered for their role in supporting the existence of people; examples being mountains associated with hunting, agriculture and fishing. Early farming peoples venerated mountains as weather makers. Clouds gathered about the peaks and their rains fed the streams or fell directly upon the plains. The divinities of the mountains were therefore thought to act as regulators of the flow of life-giving waters and to oversee the entire process of the agricultural cycle. Farmers believed that the mountain spirits came down from the high peaks in early spring to guard and nourish the rice fields and then returned to the mountains in the fall (in fact the spirit of the mountain, yama no kami, and the spirit of the rice field, ta no kami, were interchangeable). Some of the earliest stone age artifacts discovered by archaeologists are huge, uncut boulders at the foot of many sacred mountains. These boulders, called iwa-kura, or stone seats, were ritual altars where villagers conducted agricultural ceremonies to welcome and send off the deities. Other mountain peaks were venerated by fisherman and sailors. Ancient myths speak of Mount Chokai and Mount Taisen in Honshu and Mount Kaimon in Kyushu as the abode of deities who controlled navigation and the safety of seafarers.

A second category of sacred mountain in early Shinto were those mountains associated with the spirits of the dead. From early stone age times mountains were known as the realm of death. Corpses were abandoned or buried at the foot of mountains that could be seen from the place where the deceased had lived, and the spirits of the dead were believed to gather on the summits of such mountains. After death the souls were believed to undergo a process of purification during which they became Kami spirits. These ancestor spirits, residing upon and thereby sanctifying the mountains, had the power to influence all areas of human affairs. While particular mountains were thus considered sacred by Shintoism, there is no evidence that they were visited for pilgrimage purposes nor that any temple structures were built upon them. The sacred mountains were the private abodes of the spirits and it was enough for humans to revere those spirits from afar.

In the sixth century there began a major importation of Chinese culture and religious ideas into Japan accompanied by a corresponding evolution in the religious use of the sacred mountains. In ways imitative of well established Buddhist and Taoist traditions in mainland China the Shinto sacred mountains began to be used as hermitage sites for Buddhist recluses and wandering ascetics, and thereafter as pilgrimage destinations for members of the Imperial family and the ruling aristocracy. Thus, in addition to being objects of religious reverence, the sacred mountains also became arenas of religious practice. By the early ninth century two mountain oriented Buddhist sects had been founded, the Tendai, centered upon sacred Mt. Hiei near present day Kyoto, and the Shingon, upon sacred Mt. Koya in the Kii peninsula.

Shingon in particular, founded by the sage Kukai (774-835), placed emphasis on sacred mountains as the ideal sites for religious practice and the attainment of Buddhahood. Ascents of the mountains were conceived of as metaphorical ascents on the path of spiritual enlightenment, with each stage in the climb representing a stage in the passage through the realms of existence formulated by Buddhism. During the Heian period (793-1185) Buddhist temples were increasingly built on the sides and summits of many Shinto sacred mountains. It was believed that the native Shinto kami of these mountains were in reality manifestations of Buddhist divinities thus pilgrimage to the mountains was believed to bring favors from both the Shinto and Buddhist divinities simultaneously.

By the middle of the Heian period the complex interaction of Sangaku shinko, Shintoism and Shingon Buddhism had given rise to one of the most unique and fascinating religious practices found anywhere in the world. This was the sanctification of enormous, yet precisely delineated regions of the countryside through the process of mandalization. Mandalas have various definitions and uses in different Buddhist contexts. In Shingon Buddhism they may be generally explained as graphically drawn, symbolic representations of the residence of the Buddha, which is simultaneously the fundamental essence and nature of the human heart-mind. Practitioners of Shingon would utilize mandalas as aids to meditation. By visually entering into the mandala, invoking the deities there represented, and proceeding to the center, the meditator would take one more step along the path towards the attainment of Buddhahood. What is unique to the sect of Shingon Buddhism was its overlay of mandalas onto large tracts of land in order to delimit a grand scheme of sacred areas. The act of going on pilgrimage to the many sacred mountains contained within the great land mandalas, particularly the Kumano mandalas of the Kii peninsula, thus became a profound exercise in spiritual awakening. The sanctity of the pilgrimage and its transformational power were available not only at the individual sacred sites themselves, but also along the entire mandalic path between the sites.

Concurrent with and contributing to this development of regional sacred space was the emergence of a religious movement of mountain ascetics known as Shugendo. A blend of pre-Buddhist folk traditions of Sangaku shinko and Shinto, Tantric Buddhism, and Chinese Yin-yang magic and Taoism, Shugendo may be roughly defined as the 'way of mastering magico-ascetic powers by retreat to and practice within the sacred mountains'. Shugendo practitioners were called Yamabushi, a term which meant 'one who lies down or sleeps in the mountains' and the sect included various types of ascetics such as unofficial monks, wandering holy men, pilgrimage guides, blind musicians, exorcists, hermits and healers.

A leading scholar of Shugendo, H. Byron Earhart, explains that "In the early stages of the development of Shugendo the yamabushi usually were unmarried mendicants who spent most of their time in religious practice within the mountains; in later periods most yamabushi married and either had their temple homes at the foot of sacred mountains or made periodic trips of religious pilgrimage and ascetic retreat to the mountains..... When the yamabushi descended the mountains they visited their 'parishioners' to administer blessings from the mountain or perform special services of healing and exorcism. The yamabushi were adept in a variety of purifications, formulas, and charms. The religious goal of Shugendo was as diverse as its organization, technique, and procedure. In general it amounted to the utilization of religious power for every imaginable human need". Because of its loose organization, its lack of textual doctrine, and its appeal to the simple, illiterate folk people of the countryside, Shugendo became a popular movement throughout Japan from the twelfth century to the time of the Meiji restoration in 1868. According to one study, more than 90% of the village shrines in mid-northern and northeastern Japan were served by Shugendo priests.

The practice of pilgrimage to the sacred mountains was much stimulated by these two factors: the Shingon mandalization of sacred space and the Shugendo tradition of utilizing the sacred mountains as training grounds for spiritual development. No longer were the nobility and the aristocracy, the ascetic hermits and the Buddhist monks the only persons who went upon pilgrimage. By the twelfth century, peasant farmers and village tradespeople also began journeying across the countryside to the sacred mountains. As the habit of pilgrimage developed so also did the network of shrines around the country. Besides the great mandalic clusterings of temples on the sacred mountains of the Kumano region, other pilgrimage traditions emerged over the centuries of the Kamakura, Muromachi, and Tokugawa periods . In general these traditions were of two types. One type were pilgrimages based on faith in charismatic holy persons, such as the 970 mile journey to the 88 shrines of Kobo Daishi on the island of Shikoku (Kobo Daishi is the posthumous title of Kukai, the founder of Shingon Buddhism). Another type were pilgrimages to sites noted for their association with particular Buddhist deities, such as the 1500 mile journey to the 33 shrines of the Bodhisattva Kannon (Avalokiteshvara) on the island of Honshu. During the Tokugawa period (1603-1867) these shrines, collectively called the Saikoku pilgrimage, attracted great numbers of people because of the belief that Kannon had assumed bodies at each of the sites to assist sentient beings with 33 specific types of sufferings.

Additionally, from the twelfth century onwards, many devotional confraternities were founded which actively promoted the practice of pilgrimage. To this day these confraternities still organize and conduct group pilgrimages to the sacred mountains. Pilgrimage and the sacred mountains have thus been integral factors in the evolution of Japanese culture and religion. Whether in giving thanks for rains or plentiful crops, seeking the assistance of Kami spirits or the blessings of Buddhist divinities, the Japanese people have always recognized the wisdom of disengaging from the social realm to periodically reconnect with the sacred places of peace and power. (Readers interested in studying Japanese pilgrimage traditions and sacred places in more detail are referred to the writings of Earhart, Davis, Foard, Grapard, Hori, Statler, Swanson, Reader, and Tanaka listed in the bibliography)