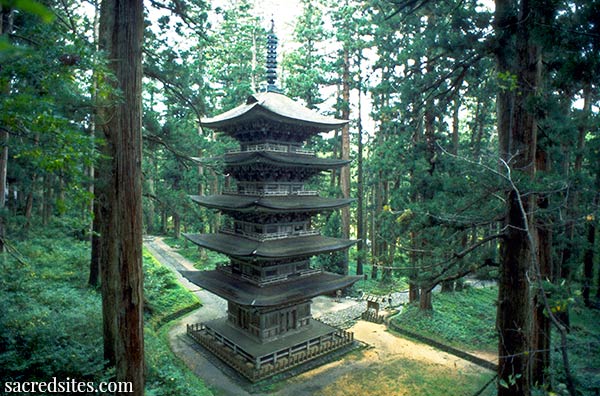 
Dewa Sanzan (Three Mountains of Dewa) comprises the three sacred mountains of Hagurosan (419 meters), Gassan (1980 m) and Yudonosan (1504 m), clustered together in the ancient province of Dewa (modern-day Yamagata prefecture on Honshu Island). Holy to the Japanese Shintō religion and especially the mountain ascetic cult of Shugendō Buddhism, Dewa Sanzan are a popular pilgrimage site visited by many, including famed haiku poet Matsuo Bashō on his Narrow Road to the Deep North.

While most probably venerated in pre-historic times, the three mountains were first opened as a religious center 1400 years ago in 593 by Prince Hachiko, the first-born son of the then reigning Emperor, Sushun, who was the 32 emperor of Japan. The prince renounced his title and position, took the name of Kokai, and became a wandering mountain hermit. While on a beach in the Dewa province, he saw an enormous black bird with three legs that led him first to Mt. Haguro and then to the other two holy peaks. When Kokai came to Hagurosan he went through many difficult ascetic practices and is said to have seen an apparition of the Buddha. He was then inspired to build the shrines on the three sacred mountains. Kokai stayed the rest of his years upon Haguro, where his imperial grave is maintained to this day.

Pilgrims climb Hagurosan along the stone-lined Ishi-Dan path through a dense forest of cedar trees. The steeply rising path winds back and forth, for 1.8 kilometers, and was constructed in 1648. The stone path has 2446 steps and required 13 years to complete. The path begins at a large wooden bridge and soon passes the Go-Jyu-No-To five-storied pagoda constructed by Taira no Masakado in the period 931-937 (a classical text says that Fujiwara no Ujiie, a court noble, rebuilt it in 1372). It is 29 meters tall, has five stories, and is made of plain, unpainted wood with shingles.

Atop the mountain is the shrine of Gassai-den (Sanjin Gosaiden), which houses the deities of the three mountains, Tsukiyomi-no-Mikoto, Oyamatsumi-no-Mikoto, and Ideha-no-Mikoto. The date of its foundation is unknown, but the priest Betto Kakujun rebuilt the main building of the present shrine in 1818. The building is 28.2 meters tall, 26 meters wide, and 20 meters in depth. The thatched roof is 2.1 meters thick and no other wooden building in Japan with a thatched roof is larger.

An enormous iron bell near the Sanjin Gosaiden shrine is inscribed with the year 1275 and is said to have been donated by the Yamakura Shogun, who was thankful for having repulsed the Mongol fleet from China the year before. It is the largest cast bell in northern Japan, and the third largest in the country. It is 3.14 meters tall, with a diameter of 1.85 meters, and weighs 10 tons.

After visiting Hagurosan, pilgrims trek upward through the mountain forests to the shrines of Gassan and Yudono. The deity of Yudono lives, not in a building, but in a hot water fall. Pilgrims take off their shoes, and some their clothes, to bathe in the cascade. The three sacred peaks attract pilgrims during spring, summer, and fall, with the largest Haguro festival being held on July 15. Bus transportation is available to Hagurosan yet most pilgrims prefer the traditional footpath leading to the summit. 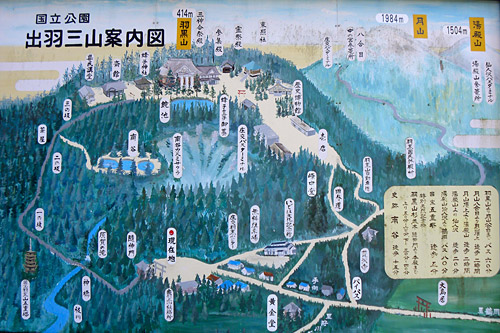 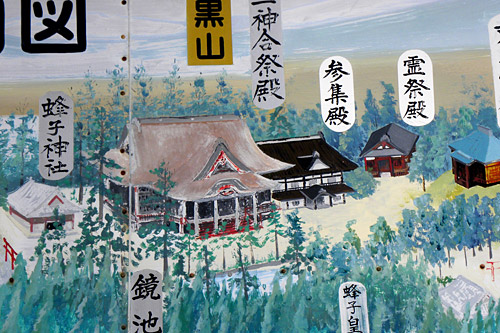 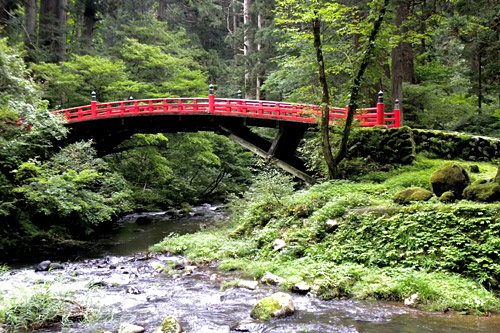 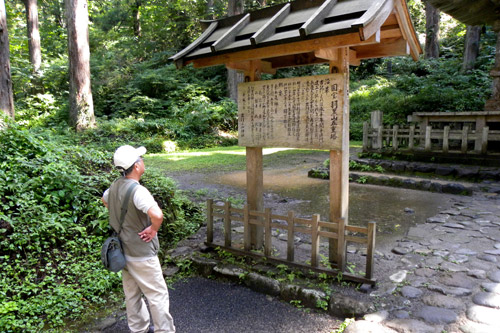