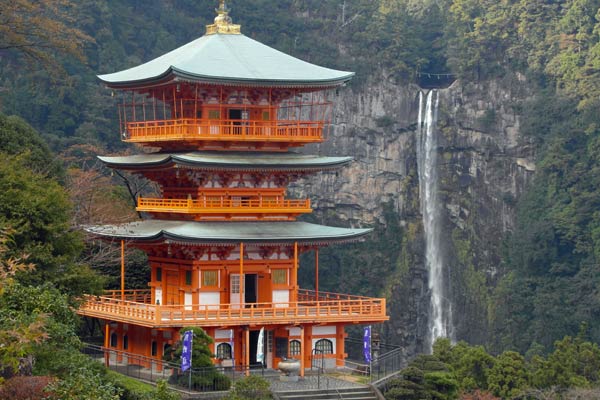 Seiganto-ji Pagoda, The Temple of the Blue Waves, is a Tendai Buddhist temple in the Wakayama Prefecture on the Kii Peninsula of eastern Honshu. Though the year of its establishment is not recorded, there are signs that nature worship has been carried out since ancient times in the area of the Nachi-no-Otaki waterfalls. There is also a legend that the Indian monk Ragyō Shōnin founded the temple during the 4th century. The 133 meter Nachi-no-Otaki waterfalls are the highest in Japan and they have been a pilgrimage site for Shinto believers since the 6th century. The kami spirit that resides in the Nachi falls is named Hiryū Gongen and is part of thirteen deities that are believed to live in the Kumano area. Translated as the “Flying Waterfall Avatar”, Hiryū Gongen is a deity that amalgamates Buddhist and Shinto beliefs.

The Saiganto-ji Pagoda is the first of the 33 temples that comprise the Siagoku Kannon pilgrimage circuit (Saikoku Sanjusansho junrei), one of the most famous of Japanese pilgrimages. Kannon is the Japanese name for the bodhisattva Avalokitasvara, or the Bodhisattva of Compassion, one of whose 33 manifestations (the only female one) corresponds to the Chinese bodhisattva Kuan-yin, known in the West as the "Goddess of Mercy."

The Seiganto-ji pagoda is also part of the adjacent Kumano Nachi Taisha Temple, which along with the temples of Kumano Hongu Taisha and Kumano Hayatama Taisha are part of the Shinto Kumano Sanzan complex. An ancient pilgrimage route known as the Kumano Kodo crisscrosses the Kii peninsula leading to the three shrines of the Kumano Sanzan. The veneration of the Kumano shrines as holy sites of Shintoism predates Buddhism's introduction to Japan in the mid 6th century. Once Buddhism arrived in Kumano it took root quickly, and rather than competing with the indigenous religion for religious authority, it began a long process of harmonious mixing.

The main hall of the Kumano Nachi Taisha temple, built in 1590, is designated as an Important Cultural Property of Japan and exhibits a waniguchi drum (Buddhist altar equipment), the largest of its kind in Japan. The enshrined principal image, Nyoirin Kannon (the Bodhisattva of Compassion), is said to grant any wish, including wishes for wealth, wisdom, and power. The image is open to the public only on one day in February.

The entire area of the Nachi-no-Otaki waterfalls, Seiganto-ji Pagoda, and Kumano Nachi Taisha temple flourished as places for Shugendo Buddhist practices, they exemplify the fusion of Buddhist and Shinto influences, and were recognized as UNESCO World Heritage Sites in 2004. 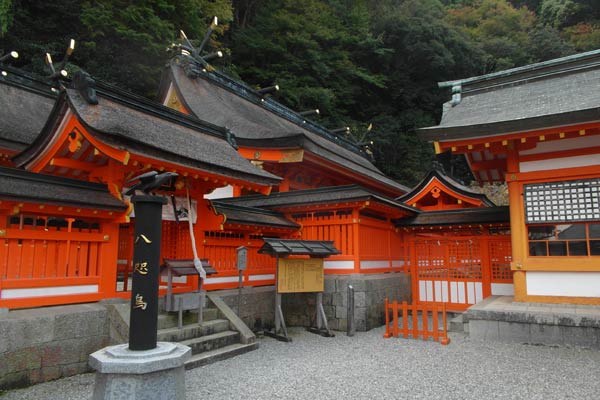 One of numerous temples at Kumano Nachi Taisha

For a listing of the 33 Kannon Temples look to this web page:
http://www.taleofgenji.org/saigoku_pilgrimage.html

For additional information on pilgrimages in Japan:
http://www.onmarkproductions.com/html/pilgrimages-pilgrims-japan.html