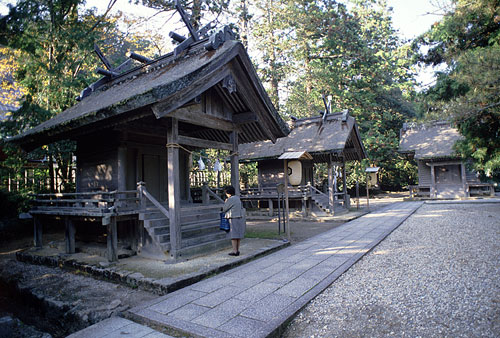 
Situated at the foot of the sacred Yakumo and Kamiyama hills, the temple of Izumo Taisha is considered to be the oldest and most important Shinto shrine in Japan. The main shrine is dedicated to Okuninushi-no-kami, a Shinto deity. According to the Kojiki (the Legendary Stories of Old Japan) and the Nihon Shoki (the Chronicles of Japan), these being the two oldest books in Japan, the main shrine was the largest wooden structure in the country prior to 1200 AD. The height of the main shrine was then about 50 meters, surpassing the 46 meter height of the Todaiji Temple in Nara (the largest wooden structure in the world today). Sometime around 1200, following one of the many fires that ravaged the site, the main shrine was rebuilt to a height of 25 meters. The present main shrine dates from 1744. Legends relate that Okuninushi's father courted and married his mother at Izumo. Because of this divine marriage, the shrine has from ancient times been a special place for marriage for the Japanese people. Okuninushi is also the deity who is traditionally credited with the introduction of medicine and the art of farming. Izumo Taisha hosts at least fifteen major festivals each year and the beautiful complex of buildings nestled in a virgin forest is always bustling with pilgrims. The November festival of Kamiarizuku, 'the time when the spirits gather' is the most important celebration of the year. 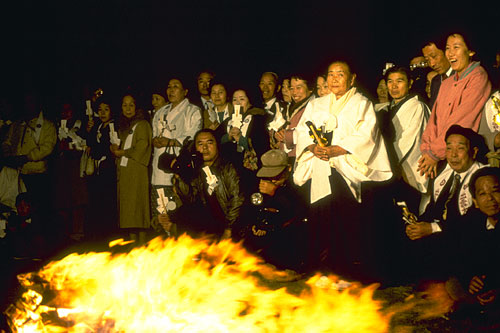 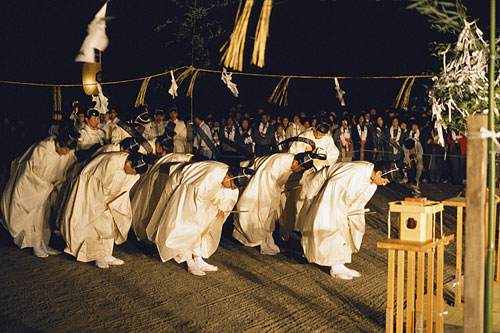