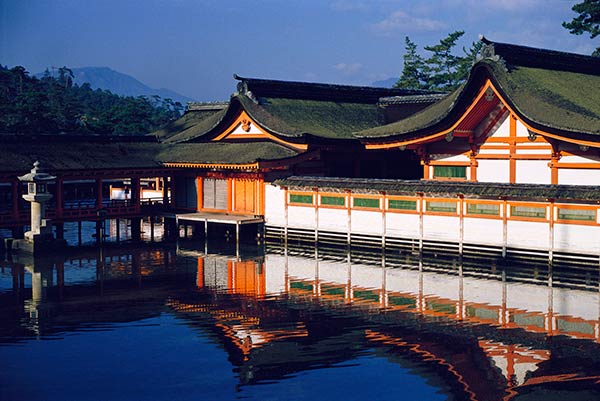 
Located in the Seto Inland Sea, ten miles (6 km) southwest of the city of Hiroshima, the small island (12 square miles) of Miyajima is a sacred site of both Shintoism and Buddhism. Long before Buddhism came to Japan in the 5th century AD, Shinto sages lived as hermits in the mountain’s forested hills.

Blanketed with ancient forests, Misen San is the highest peak on Miyajima Island, rising to 530 meters (1739 feet). From its lofty summit one has a panoramic view of many other islands in the Seto Inland Sea and the distant mountain ranges of Shikoku. Near the summit are a few small temples including the Gumonjido, a temple founded in the early 9th century AD by the great sage Kobo Daishi on his return from China. A flame burning within the temple has burned consistently from the time of the temple's dedication to the present. An aerial cable car takes pilgrims to the summit but it is more enjoyable to walk along one of the three paths through the forests, especially the Omoto path.

Miyajima’s primary temple, the Itsukushima shrine, was first constructed in 593 AD and later enlarged to its present size in 1168. One of the world’s most extraordinary examples of sacred architecture, it is listed as a National Treasure with the government of Japan. The complex of buildings includes the main shrine, several subsidiary temples, a Noh drama and dance stage, and many bridges and walkways linking the various parts of the temple. Built on tidal land and giving the appearance of floating on the sea during high tide, the shrine is dedicated to three Shinto goddesses of the sea; Ichikishima, Tagori, and Tagitsu, each of whom is believed to live within the inner sanctum of the shrine. Metal nails were not used in the construction of the buildings and there are precisely calculated crevices between the floor slabs in order to alleviate the pressure of high tidal waves caused by typhoons. Some of the ancient wooden planks used for flooring are 1.5 meters wide and over 10 meters long, and these enormous boards were laboriously transported to Miyajima from hundreds of miles away in northern Japan. One of the bridges leading to the shrine is known as the Soribashi or Imperial Envoy's Bridge. Constructed in 1557, it was used by court nobles sent to Itsukushima by the Emperor. During these times, stairs were temporarily installed; otherwise the bridge and its entrance into the temple are never used.

Adjacent to the Itsukushima shrine is the Hokoku shrine. An inner part of this shrine, known as the Senjokaku, was constructed by the fabled Japanese warrior Hideyoshi Toyotomi for the repose of the souls of war dead. Parts of the building, such as the ceiling and front entrance, remain unfinished because of Hideyoshi's death. The five-storied pagoda, 27 meters tall, is believed to have been built in 1407 and represents a harmonious combination of Chinese and Japanese architectural styles. Within the pagoda, painted in full color, is a beautiful image of the Buddha.

The beautiful Otorri gate, standing in the sea and leading to the Itsukushima shrine, is the symbol of Miyajima Island. The present Otorii, the eighth that was constructed since the Heian period (794-1192), was built in 1875 with the wood of camphor trees. It is 16 meters tall, the roof is 24 meters long, and the main pillars are made from single trees. The Otorii stands on its own support, having no part buried in the ground. During the mid-July Kangensai music festival, colorfully decorated boats are sailed through the giant gate while dancers aboard the boats perform classical sacred dances.

Associated with the Itsukushima shrine, and considered a part of its sacred geography, are seven much smaller shrines positioned at intervals around the 19-mile circumference of the island. There are no roads to most of these shrines therefore pilgrims use small boats to approach the rocky shores where the temples are located.

In addition to its many beautiful temples and Misen San, Miyajima Island is also famous for its two thousand domesticated deer, many of which mingle with tourists and pilgrims walking around the temples.