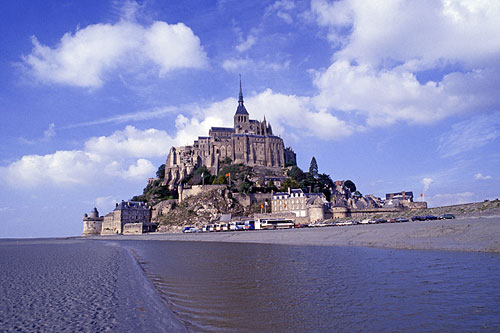 
Rising out of the mists and fog often cloaking the coasts of Normandy, Mont Saint-Michel seems a fairy-tale castle from an ethereal realm. Known today primarily as a Christian holy place, the remarkable granite mount has been a sacred site of other cultures for thousands of years. The Celts are known to have worshipped their god Belenus here, the Romans built a shrine to Jove, and hermits occupied the craggy mount until the late seventh century. Additionally, the mount is located along the archaic Apollo-Athena line that links sacred places from Ireland to Greece, including St. Michael’s Mount in Cornwall, England.

The mount first became a site of Christian importance in 708 AD, when Bishop Aubert of Avranches had a vision of the Archangel Michael telling him to build a shrine atop the mount. A community of Benedictine monks settled on the rock in 966 and soon thereafter a pre-Romanesque church and the first monastery walls were built. From that time the mount had a checkered history, cycling through periods of prosperity and decline and prosperity again, ultimately becoming one the most favored pilgrimage sites in all of Europe. What is notable about constructions dating from the medieval period is that the steep-sided mount required builders to place the church at the peak, with the monastic buildings below, and the defensive walls and the village still further below.

In the 13th century the king of France, Philip Augustus, donated funds to the monastic institution at the mount, thereby enabling the beginning of its Gothic period constructions. La Merveille, the beautiful 13th century Gothic abbey towering 500 feet above sea level, is crowned by a statue of St. Michael in the act of killing the devil in the form of a dragon. The centuries at the mount were not always peaceful for the monks, however. In the 14th century, the Hundred Years War made it necessary to protect the abbey behind walls and military constructions, enabling it to resist a siege lasting thirty years. While Mont Saint-Michel was never taken in battle, this almost occurred in 1425 when only 125 French knights valiantly held off more than eight thousand English troops. Centuries later, during the French Revolution, the abbey was secularized, and the mount was used as a prison until 1863. In 1966, in celebration of the thousandth anniversary of the monastery, the French government permitted the restoration of monastic life on the mount. A group of monks and nuns began living in parts of the abbey and now give tours to pilgrims and tourists. And most recently in 1979, UNESCO included Mont Saint-Michel on its list of World Heritage Sites. Today the mount has more than three million visitors a year, making it the second most visited place in France. Perhaps the most crowded time of the entire year is the feast day of St. Michael on the last Sunday in September.

A particularly interesting matter about Mont Saint-Michel is that the rock upon which it sits is separated from the mainland by a narrow strip of sand, which in former times was submerged beneath the tides for several hours each day. A causeway now links the rock and the mainland but it is still fascinating to observe the tides, which rise and fall as much as 45 feet (14 meters) per day, rushing as speeds of 210 feet (63 meters) a minute. The best time to visit the mount is thirty-six hours after the full or new moon, when the waves of the tides are among the most dramatic scenes along the entire Atlantic coast of France. 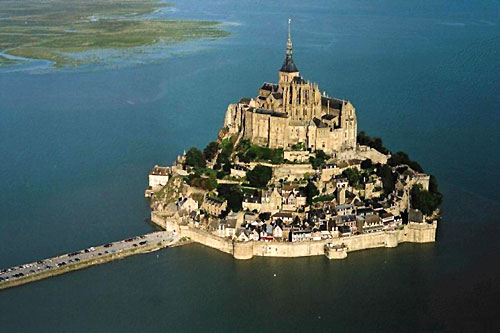