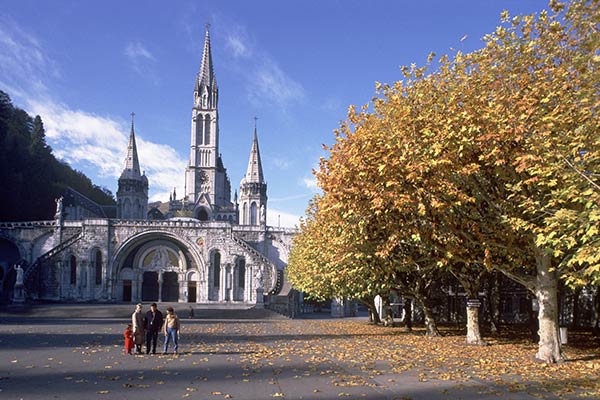 The Basilica of Lourdes, France (Enlarge)

While no firm evidence exists to indicate that the grotto of Lourdes was a sacred place in ancient times, there is a healing energy present that has made the site, in only 140 years, the most visited pilgrimage shrine in all Christendom. The origins of the pilgrimage to Lourdes began with Bernadette Soubirous, the fourteen year old daughter of devout Christian peasants. Between February 11 and July 16, 1858, Bernadette saw apparitions of a white-robed lady 18 times in a small grotto called Massabiele, along the banks of the river Gave de Pau. In the apparitions the lady told Bernadette to "go tell the village priest to build a chapel here" and that many people would soon come in procession to the holy grotto. On the day of the 16th apparition, March 25, the lady revealed herself as Mary. During her ecstatic trance in front of the grotto that day, Bernadette suddenly rose from her knees, walked a short distance, and fell to the ground. Fervently she began to dig in the earth until a small puddle of water appeared. Over the next few days the puddle gradually formed into a pool and eventually became the sacred spring for which Lourdes is now so famous.

From 1864 to 1872 the site was mostly a regional pilgrimage destination attracting approximately 30,000 persons per year. Initially the shrine was not known for its curative power but after 1873, when incidents of healing at the spring began to be reported, the shrine rapidly developed a national and then international reputation for having therapeutic powers. Pilgrims visiting Lourdes for its healing powers bathe in pools filled with cold water piped from Bernadette's spring. Reports of miracles are thoroughly examined and evidence seems to indicate that there are indeed many cases of verifiable healings at the grotto.

The increasing number of pilgrims eventually overcrowded the original basilica, built above the grotto in 1876, and in 1958 an immense concrete church, seating 20,000, was built. The stream of pilgrims to Lourdes is characterized by a strong seasonality. The season lasts from April through October, with the main pilgrimage day being August 15, the Marian Feast of Assumption. Four to six million pilgrims visit the shrine each year, and a study done in 1978 showed the pilgrims coming from 111 countries with females accounting for 69% of the pilgrims. It is estimated that more than 200 million pilgrims have come to Lourdes since 1860. According to theories regarding the powers at sacred sites, this large number of devout pilgrims has contributed to and thereby amplified the field of holiness that surrounds the shrine of Lourdes. This field then attracts more pilgrims, who in turn contribute to the further empowerment of the field.

Lourdes is not the only place where apparitions of Mary have been seen. The earliest known Marian apparition was in 40 AD in Zaragoza, Spain (included on this web site) and during the medieval period they were quite common in western and Mediterranean Europe. While there is a large body of legendary material describing these apparitions, we have no way of authenticating the stories and therefore scientists and skeptics often dismiss the entire matter as religious superstition. There have been several significant Marian apparitions since the mid 1800's, however, and the presence of multiple witnesses for each of these apparitions makes them difficult to dismiss as mere superstition. Besides the 1858 events in Lourdes, there were remarkable apparitions in La Salette, France in 1846; Pontmain, France in 1871; Knock, Ireland in 1879; Castelpetroso, Italy in 1888; Fatima, Portugal in 1916-1917; Garabandal, Spain in 1961-1965; Zeitoun, Cairo, Egypt in 1968-1968; and Medjugorje (Medjigoria), Yugoslavia beginning in June, 1981.

While it is not the purpose of these present writings to examine these events in detail (readers interested in this subject are referred to the works of D. Scott Rogo, Don Sharkey, Mary Lee Nolan, and Peter Mullen, all listed in my bibliographies), certain elements of the Marian apparition phenomena are interesting to note. Generally speaking, the apparitions occur in Roman Catholic countries; the witnesses of the apparitions are usually young children between the ages of 6 and 12; the messages given by the apparitions to the children are concerned with world affairs of which the children had no previous knowledge; and the apparitions make accurate predictions of future events. These matters suggest two questions: What causes the apparitions to occur and why is it that they are usually only seen by children (though Castelpetroso with over 500 witnesses and Zeitoun with hundreds of thousands are exceptions to this)? Regarding the reasons for the occurrence of Marian apparitions, D. Scott Rogo writes that it is "possible that they are projections of images latent in our minds which literally become temporarily real on rare occasions.....The key to understanding Marian apparitions may be in their tendency to occur at times of social and/or political crisis. At such times of stress, some form of mass telepathic communication may occur in the collective unconscious of the threatened culture. This may lead to the formation of a "group mind", which, in turn, results in the projection of a Marian visitation......The apparition, which might be compared to a thought form, merely echoes back the concerns of the people who have projected it.....The alternative is that they represent actual visitations by a spiritual being or presence deliberately sent here to instruct us." These ideas accord well with the current author's belief that human prayer and intentions have the power, however mysteriously it is exercised, to invoke and bring into manifestation seemingly miraculous phenomena. The manifestation of deities, be they Christian, Hindu, or of other traditions thus appears to be a response to the conscious and unconscious spiritual yearnings of particular individuals or large groups of people.

And, why is it that apparitions are most often seen by young children and yet invisible to older persons who are standing nearby? Writing in his book Miracles, D. Scott Rogo tell us that "Experimental evidence suggests children may be inherently more psychic than adults and therefore more naturally sensitive to spiritual presences." Additionally there are the important factors of humility and worldly ignorance. Children, not yet programmed with the adult belief that certain things are impossible, still have a channel of receptivity open to the miraculous. 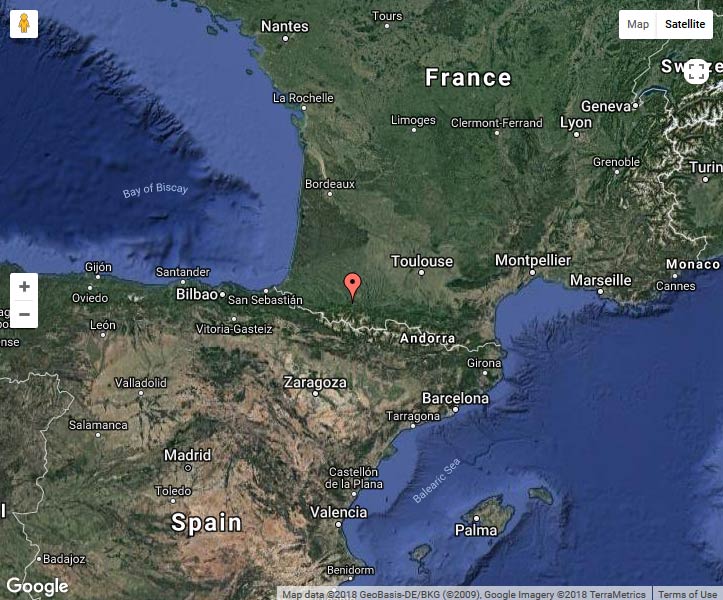