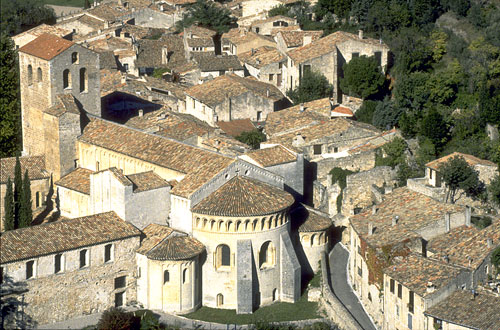 Hilltop view of the church and town of Saint-Guilhem-le-Desert, France


The abbey of Saint-Guilhem-le-Desert in the Gellone valley (30 kilometers northwest of Montpellier) owes its name to Guilhem, a French knight of the medieval period. Born sometime in the late 8th century, Guilhem was the grandson of Charles Martel, the Duke of Aquitane, and one of the Emperor Charlemagne's chosen knights. He fought bravely against the Saracens (Muslims) of Spain and became famous as the hero of medieval ballads due to his knightly prowess and chivalrous character. A devout Christian who ended his days (died 812 AD) in the monastery at Gellone, he endowed the abbey with a relic of the True Cross, given to him by Charlemagne. Because of this relic, the monastery soon prospered and became an important place of pilgrimage in southern France.

With the development of the great medieval pilgrimage to Santiago de Compostela (the shrine of Saint James in northwestern Spain) in the 10th century, Saint-Guilhem-le-Desert became a recognized stage on one of the four major routes leading to Compostela. By the middle of the 11th century this influx of pilgrims to the Gellone valley enabled the monks to rebuild their monastery on a larger scale, using the architectural techniques of the early Romanesque style. The present abbey church dates from that period.

The life of the monastery continued, influenced from time to time by national events and the wider crosscurrents of history until its slow decline in the 18th century and its suppression during the French Revolution in 1790. In the 19th century the abbey was vandalized and fragments of its buildings are found scattered all over the region, even as far away as the Cloisters museum, north of New York City. Reconstructed in the 20th century, today the abbey is the parish church of the small, picturesque village of Saint-Guilhem-le-Desert. No archaeological evidence has come to light indicating the sanctity of the site in pre-Christian times.

The following detailed information on Saint-Guilhem-le-Desert can be found on the Languedoc website.

Guilhem dedicated the next thirteen years to sustaining the southern frontiers of the Frankish empire. He was renowned as one of the most valiant warriors of his time. He married twice; his second wife, the Lady of Orange was apparently the widow of a Saracen Lord that he killed and whose estates he seized. Guilhem's exploits became famous and he evolved into the hero of medieval ballads of knightly prowess and chivalry. He is the hero of the Chanson de Guillaume, an early chanson de geste, and of several later sequels.

In 804 Guilhem retired to the Abbey of Aniane. (For many centuries it was regarded as entirely laudable for men to abandon their wives and families to become monks). In 806 he headed a group of monks who set off to found the Abbey of Gellone (now Saint-Guilhem-le-Désert). Before his death, Charlemagne had given the young Guilhem a reliquary, which was believed to contained pieces of the True Cross. (Hundreds of such bogus relics were in circulation even before the Crusades). Guilhem left this one to his Abbey, where it remains to this day. The jewelled reliquary is carried through the village in procession once a year on the 3rd May - St Guilhem's feast day. Replicas made of biscuit are available in the Abbey Church. The faithful claim that they provide protection against lightening.

Guilhem is known by several different names, some of them reflecting his appearance, some his conquests, some his later religious life, and some merely confusion with other semi legendary Guilhems. He was Guilhem the short nosed - French Guillaume au Court Nez, or the Marquis au court nez - a disfigurement incurred during his battle with that pesky Moorish giant who lived in the castle at Gellone. He was also Guillaum de Narbonne; Guillaume Fierabrace, Guillaume d'Orange, and Guilhem de Gellone and Saint Guilhem.

According to the book Holy Blood Holy Grail Guilhem was the son of "Theodoric, king of the Jews of Septimania" crowned in 768. Through him the bloodline of Jesus became the bloodline of Frankish royalty. This fantasy was later incorporated into the plot of the best-selling novel The Da Vinci Code.

The town Saint-Guilhem-le-Désert lies in the Gellon valley just North of Gignac, east of the new A75 motorway, about 30 kilometres Northwest of Montpellier. It is really more of a village with a population of around 250.

The village has retained its medieval personality with old houses in amber stone, an ancient tower, and a shady square with a fountain and traditional plain trees. It sprawls organically along the Verdus stream, surrounded by cliffs, verdant with thyme, oak and pine trees. The prison tower is a vestige of the medieval village and still dominates it. It is a simple square crenelated tower, pierced by a simple window.

Saint-Guilhem-le-Désert is counted among the Plus Beaux Villages (most beautiful villages) of France, classed, since 1999 a National Site. It is home to numerous artists, many of whom may be found in their studios around the square.

Overlooking the village, on the side of the cliff, is a castle of Visigoth origin. It was only ever a modest fortress but has attracted colourful stories involving Visigoths, Saracens and troubadours. According to legend this castle was once the abode of a Saracen giant, called Don Juan, who was defeated in improbable circumstances by the eponymous Guilhem in single combat.

The Abbey is located in the town of Saint-Guilhem-le-Désert in the Gellone Valley not far from Montpellier, in the Hérault département. It is a Benedictine foundation dedicated to Saint-Sauveur. It was founded in 804 by Guilhem of Orange, Duke of Aquitaine and second Count of Toulouse, a member of Charlemagne's court, later known as Saint Guilhem.

As the medieval pilgrimage route to the shrine of Saint James of Compostella in Spain developed in the 10th century, the monastery of Saint-Guilhem-le-Desert became a staging point on one of the four main routes through Europe leading to it. Like all such staging points it benefited financially from its more than usually gullible pilgrim visitors. By the middle of the 11th century the monks were rich enough to rebuild their monastery on a larger scale in the latest Romanesque style. The present abbey church dates from this period.

By the twelfth century, the abbey had been renamed in honour of its founder. And as the site in the Gellone Valley had been selected because it was a virtual desert, we now know it at the Abbey of Saint-Guilhem-le-Désert. By 1206, a new cloister had been built at Saint-Guilhem incorporating columns and pilasters which are now located in an American museum. Many of them recall classical Roman columns, but they depart from classical models in their variety of design.

During the 14th to 16th centuries, progressively declined. Under the 'commende' system the abbot was nominated by the king, who selected from among the members of the high clergy (rather than being elected by the monks of the community). The system inevitably led to abuse and for centuries successive Abbots from aristocratic families accumulated titles and neglected their monastic duties.

Like other French religious buildings, Saint-Guilhem suffered in the Wars of Religion during and after the Reformation. In 1569 the Abbey was pillaged by Protestants and sculptures were damaged. Furniture and fittings were sold off to pay for repairs, and for a garrison to protect the Abbey. By 1670 the monastery was in a state of advanced decay. The monks called upon the congregation of Saint-Maur to undertake repair work to save the buildings from ruin and re-establish the monastic life.

The abbey declined in the 18th century. In 1783, it was attached to the bishopric of Lodeve, losing its independence. Monks from Saint-Maur occupied the monastery until the French Revolution, by which time the community had been reduced to six monks. It was suppressed in 1790 during the French Revolution, and the buildings sold ominously to a stonemason. The abbey church escaped vandalism as it became a parish church, but the rest was vandalised. Various businesses were established in the cloister, including a spinning business and a tannery. Private houses were established in the buildings around the cloister and the cloister itself which was used as a stone quarry.

Fragments of the abbey may be found all over the region, and even much further away. You can see some of those columns of the cloister dating from before 1206 in the Cloisters museum, north of New York (part of New York's Metropolitan Museum of Art). It is difficult to know who best deserves the title of Most Cretinous Philistine - the people who sold them, those who bought them, or those who now decline to return them. The cumulative damage of these various acts of vandalism was so severe that it is now impossible to determine the number and sequence of its columns - or even the dimensions of the cloister.

In 1840, the abbey was taken in hand by the Monuments Historiques. Restoration since 1960 has tried to restore the original aspect of the building. A new cloister has been built. Since the end of the 1970s, a community of monks from Carmel Saint Joseph has made the abbey their home.

The abbey is one of several World Heritage sites in the Languedoc. In 1987, the Abbey of Gellone was classed as a French Historical Monument. On the 5 December, 1998, it was classified as a World Heritage site by UNESCO as part of the "Paths of Saint James" - the pilgrimage routes of St-Jacques de Compostela.