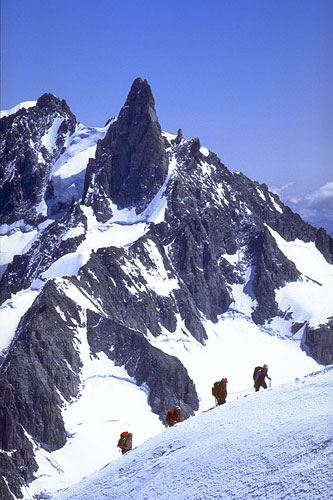 
Rising to 15,771 feet (4807 meters), Mt. Blanc is the highest peak in the Alps and indeed all of Europe. Part of an enormous mountain massif that lies along the French-Italian border and reaches into Switzerland as well, Mt. Blanc was created by an upswelling of igneous rock from the bed of an ancient sea. Its peak, perpetually covered in snow, soars above 40 square miles (100 square kilometers) of glaciers that periodically flow to the bottom of nearby Chamonix valley. A 16th century telling of a much earlier legend mentions a temple and statue of the Celtic sky god, Jupiter Poeninus, that was once located upon a pass high on the mountain's side. Old Christian myths tell of St. Bernard's eventual domination of this 'pagan devil' and the ensuing naming of the peak as Mont Maudit, or the 'Accursed Mountain'. Visited by famous European poets such as Goethe in 1779 and Shelley in 1816, the mountain was renamed Mont Blanc in French and Monte Bianco in Italian, both names meaning the 'White Mountain'. Long considered unclimbable, the peak was first scaled in 1786 and today is one of Europe's most favored sites for glacier climbing and extreme skiing.