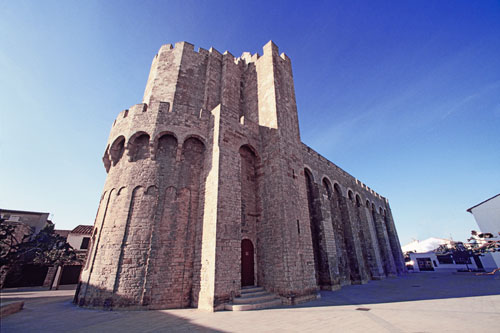 
Saintes-Maries-de-la-Mer, the 'Saint Marys of the Sea', is a small fishing village located on the south-central coast of Mediterranean France in the Camargue region of Bouches-du-Rhone. Archaeological excavations and local legends indicate that the site has been venerated as a holy place by a succession of cultures including the Celts, Romans, Christians, and most recently, the Romania Gypsies. Once a sacred site of the Celtic threefold water goddess, the holy spring was known as Oppidum Priscum Ra. Superseded by a Roman temple dedicated to Mithras in the 4th century BC, the site was later taken over by the Christians. Historical sources mention a church from the 9th century but very little is known of the town's history prior to the 14th century because of its remote location. Neither is it known precisely when and why the local church became the most sacred place of the Gypsies sometime after their arrival in Europe in the early 1400's.

Dating from the mid-12th century, the fortified Romanesque church enshrines three wooden statues, themselves of lesser age, that hint at the early Christian sanctity of the site. According to one local legend, after the resurrection of Christ, Mary Magdalene, Marie-Salome, Marie-Jacobe, Lazarus and several other disciples were forced, in 45 AD, to flee the Holy Land by boat. Following a perilous journey across the Mediterranean Sea, the boat eventually landed near the present day village of Saintes-Maries-de-la-Mer, where the passengers went ashore. What next happened to the passengers is not specified in the legend but two of them, Marie-Salome and Marie-Jacobe, became, in time, objects of veneration to the local people. The church, however, enshrines three images, the additional one being of Sara-la-Kali, whose origin and identity are quite mysterious. The gypsies that throng to worship her each May believe Sara to have been a powerful local queen who welcomed the tired travelers from the Holy Land, while other sources suggest she may have been an ancient pagan goddess or a black Egyptian woman who was the servant of Christ's mother Mary. Whatever the explanation, the three female statues are the subject of the fascinating Pelerinage des Gitans, or 'Pilgrimage of the Gypsies', held each year on May 24 and 25.

During the weeks preceding the festival, many thousands of gypsies flock to the little village from the far corners of Europe. It is a time of much celebration, of dancing and feasting. The gypsies, being a homeless and wandering people, look upon the festival as a time of religious worship and also as a time to visit with friends and relatives whom they have not seen since previous festivals. On the afternoon of the 24th the church is filled with pilgrims and surrounded by thousands more. They have come to witness the arrival of the saints. First, the statues of the two Marys, stored in an ancient box containing other relics, are lowered from their storage place high in the church. As the reliquary slowly descends, the crowd of pilgrims, overcome with religious fervor, reaches up their hands, even holding up babies at arm's length, in the belief that to touch the relics before they reach the ground is to receive a wondrous healing and protection from misfortune.

After the statues of the two Mary's have been revealed, the statue of Sara is brought forth from an underground crypt. Carried on the shoulders of the gypsies and accompanied by the boisterous pilgrims, Sara is taken on a procession to the sea. Returned to the church, Sara and the two Mary's are venerated throughout the evening by the many pilgrims passing through the shrine. The following morning, the 25th of May, the statues of the two Mary's are placed in a boat and then taken upon a grand and colorful procession to and into the sea. In the afternoon a farewell ceremony is given to the saints, the gypsies begin to depart, and the village of Saintes-Maries-de-la-Mer again settles to its quiet life.