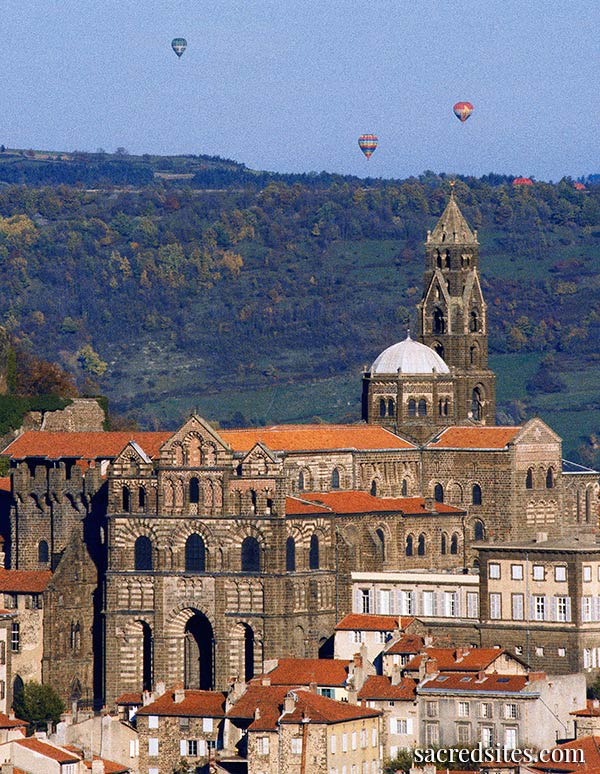 
Crowning the summit of Mount Corneille in the Auvergne region of central France, the cathedral of Notre Dame in Le Puy is one of Europe's oldest, most famous and most beautiful pilgrimage shrines. Much visited during medieval times by pilgrims on their way to Santiago de Compostela and highly venerated for its Black Madonna statue, Mount Corneille's use as a sacred place has its roots in prehistoric times. Prior to the arrival of Christianity an enormous dolmen, or single standing stone, stood atop the sacred hill. Nothing is known of the people who erected this stone nor of the manner in which it was used, yet the mysterious stone was to play a decisive role in the development of Le Puy as a Christian pilgrimage site.

Sometime between the 3rd and 4th centuries AD, a local woman suffering from an incurable disease had visions of Mary. In her visions she received instructions to climb Mt. Corneille, where she would be cured by the simple act of sitting on the great stone. Following this advice, the woman was miraculously cured of her ailment. Appearing to the woman a second time, Mary gave instructions that the local bishop should be contacted and told to build a church on the hill. According to legend, when the bishop climbed the hill, he found the ground covered in deep snow even though it was the middle of July. A lone deer walked through the snow, tracing the ground plan of the cathedral that was to be built. Convinced by these miracles of the authenticity of Mary's wishes, the bishop completed construction of the church by AD 430. Despite ecclesiastical pressures, which sought to combat the survival of pagan religious practices, the great dolmen was left standing in the center of the Christian sanctuary and was consecrated as the Throne of Mary. By the eighth century, however, the pagan stone, popularly known as the "stone of visions," was taken down and broken up. Its pieces were incorporated into the floor of a particular section of the church that came to be called the Chambre Angelique, or the "angels chamber." Most of these early structures disappeared and were replaced by the current basilica, a composite construction dating from the 5th to 12th centuries AD. While primarily an example of Romanesque architecture, the massive cathedral of Notre Dame shows strong Byzantine and Arabic influences in both its construction and decoration.

The city of Le Puy has an additional pilgrimage shrine that was much visited during medieval times. Perched high atop an eighty-meter needle of steep volcanic rock, the Chapel of St. Michael marks another site known to have had pre-Christian sanctity.