The Abbey of Conque 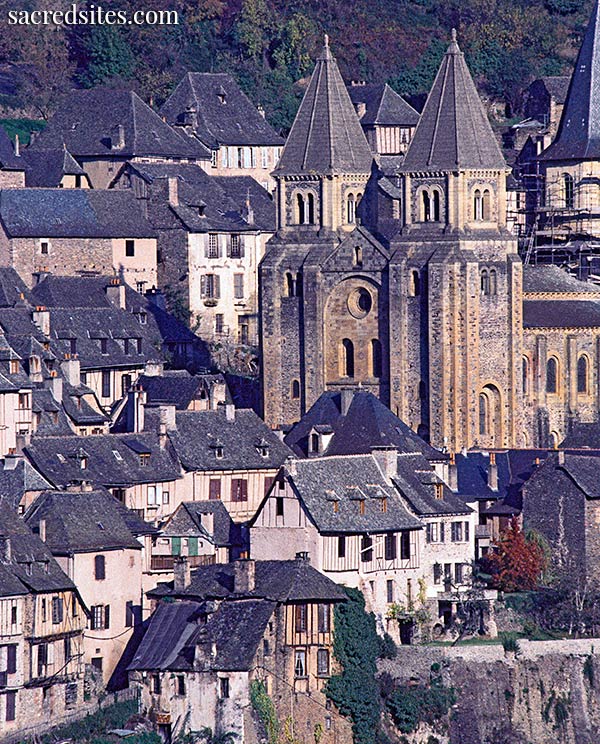 The Abbey of Conque, France


When one first views the steep, rocky, and thickly wooded mountain side upon which the abbey of Conques is perched, the unsuitability of the location for any sort of building, human habitation, or commercial activity is immediately apparent. Yet in this remote Auvergene valley stands one of medieval France's most visited pilgrimage shrines.

Why did this particular location become such a celebrated shrine? Church authorities explain that Conques gained renown as a major stopping place along one of the four principal routes leading to Santiago de Compostela, because of the 12th century Benedictine abbey that housed the relics of St. Foy. Conques, however, had been venerated as a sacred place long before relic veneration and pilgrimages became popular in the 9th to 15th centuries. Preceding the Benedictines' arrival in 819 AD, a Carolingian church had stood for many years, and prior to that time the site was considered holy by people dwelling in the local forests. During medieval times, Conques was known to be a particularly miraculous place and the explanation given to the Christian pilgrims was that the miracles were caused by the relics of St. Foy. A bit of detective work concerning the history of St. Foy reveals, however, that this person certainly did not have enough time to lead the life of a saint. Foy was a small girl child, living in Asia Minor (present day Turkey), who was burnt as a Christian in 303 AD and therefore became classified as a martyr of Christ. There are neither stories concerning the child which give any evidence of a saintly life (such as we find with St. Francis) nor any reason that her relics would have spiritual powers. Furthermore the relics of Foy, like so many others in medieval times, are of dubious authenticity.

Writing in The Travelers Key to Medieval France, John James tells an interesting story concerning the monastery’s acquisition of the relics. At a gathering of the monks of Conque "the monk Armisdus was chosen to visit Agen, where the bones of Saint Foy lay. On arrival he was asked to join the community. He was in no hurry; it took him ten years to gain their confidence. Patiently and, one hopes, not a little guiltily, he waited until he had been appointed guardian of the church's treasures, including the saint's tomb. His opportunity came one night when he was left alone in the church. He broke into the tomb, stole the bones, and on a horse which had been prepared for the occasion, rushed the relics to Conques. The enraged Agen monks pursued, but the triumphant thief reached home with his treasure, and it was received with great rejoicing."