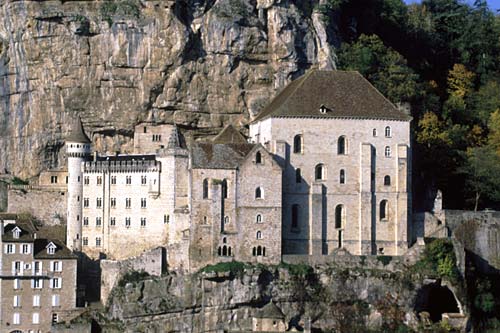 
Set precariously into limestone cliffs overlooking the valley of the Alzou River, the shrine of Rocamadour was one of the most celebrated Marian pilgrimage sites during the Middle Ages. Unknown to most pilgrims - then and now - the site was previously a holy place of Sulevia, Minerva and Iduenna (a triple goddess integrated by Cybele) and later a Celtic shrine. The first reported Christian use of the site dates from early in the 11th century when pilgrims made their way to Rocamadour to see a Black Virgin statue in a small chapel built into the cliffs. Historical records tell that in 1166 an incorrupt body was discovered buried in a cave next to the chapel and thus began the legend of St. Amadour. The identity of the body was unknown but it was assumed he was a hermit who had lived in the area. Because of his devotion to God, he was given the name Amator, meaning “the lover” and from this evolved the name of the town, Roc-Amadour, the ‘rock of the lover.’

Following the discovery of the incorrupt body, pilgrims began to flock to the cave and various legends regarding the identity of the body began to develop. The most popular of these concerned a Biblical character known as Zacheus who had once entertained Jesus in his home. After the Crucifixion, St. Zacheus is said to have traveled to Gaul, under the name of Amadour, Guided by angels to the cave shrine of the goddess Cybele he installed a Black Virgin statue supposedly carved by St. Luke. Rather than being fashioned by St. Luke, however, the state of the Black Virgin was carved from walnut in the 11th century and then placed on an altar built upon a Druid stone. Also in the 11th century a hamlet, L’Hospitalet, was built above atop the cliffs to shelter pilgrims hiking to the shrine of Compostela, Spain. At this time the shrine was believed to bring fertility to brides.

Over the ensuing centuries the crypt of St. Amadour and the chapel of the Black Virgin underwent periods of prosperity and decline. In 1562 the chapel was pillaged and burnt by the Protestants and the body of St. Amadour was destroyed. The statue of the Black Virgin, however, was unharmed. Reconstruction of the shrine began in the 1800’s. The chapel and its legendary statue continue to be the venerated and Rocamadour remains one of the most popular Marian holy places in all of France. 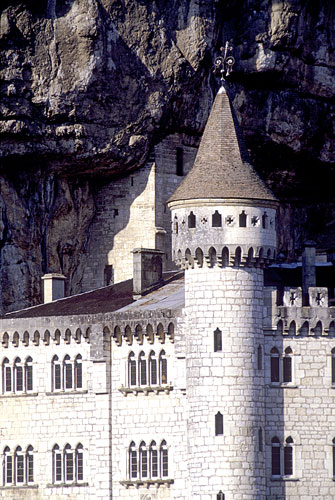