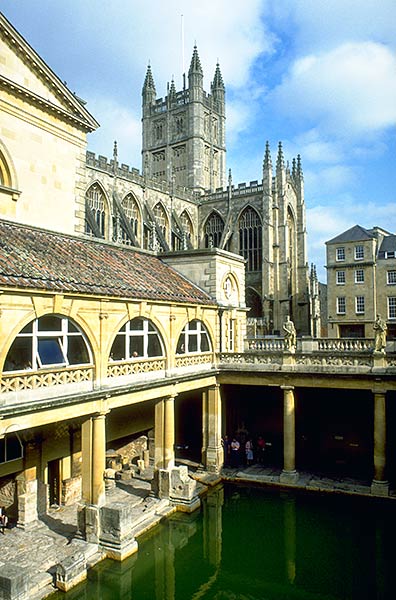 The hot springs of the Roman temple of Aquae Sulis and the Abbey of Bath, England


Archaeological excavations have revealed that the human use of the hot mineral springs at Bath began at least 10,000 years ago and have continued to the present times. First frequented by Neolithic hunter-gatherer tribes, the springs were later venerated as sacred by Celtic, Roman, and Christian peoples. The Celts, who arrived in England around 700 BC, erected what are believed to be the first shrine structures at the springs. Dedicated to Sulis, a goddess of water, the shrine was a religious center for much of southwestern England. Soon after the arrival of the Romans in England in 43 AD, the Celtic shrine was taken over and the goddess Sulis was identified with the Roman goddess Minerva as a healing deity. Beginning sometime around 65 AD, and continuing for nearly four centuries, the Romans constructed increasingly elaborate bathing and temple complexes at the springs.

The main spring, bubbling out of the ground at a rate of a quarter of a million gallons per day and maintaining a constant temperature of 120 degrees Fahrenheit (49 degrees Centigrade) was however, far more than just a source of hot water to the Romans. It was a sacred place where mortals could communicate with deities of the underworld and seek the assistance of the goddess Sulis-Minerva, and also the god of healing, Asclepius. Archaeological excavations in the bottom of the spring have brought to light a remarkable collection of sacred votive offerings thrown by worshippers into the waters. Also from the spring's bottom, over 12,000 coins - spanning the entire Roman period - have revealed that the behavior of throwing coins into a spring to the accompaniment of a wish is a universal and ancient human behavior. The numerous bathing pools were fed with a constant flow of water delivered by lead pipes which still function today, and the largest bath was lined with 42 great sheets of lead whose combined weight exceeded 8 and 1/2 tons.

This great healing shrine of Aquae Sulis was not to last however. Following the departure of the Roman legions from Britain early in the fifth century AD, the city and its splendid temples and baths swiftly fell into decline. Over time the baths were covered by the relentless silting of the spring and only the fallen temple of Sulis-Minerva marked the ancient sacred site. Yet the town was not abandoned. Rather it continued to grow and by the seventh century the first Christian structure had been established upon the ruins of the Roman temple. For the next twelve hundred years a succession of churches rose and fell upon the hallowed ground with the currently standing abbey having been constructed between 1499 and the mid 17th century. The hot springs, while never again receiving architectural development equal to that of the Romans, were continuously used throughout the medieval period. By the beginning of the 1600's the springs had begun to attract royal and aristocratic families intent on 'taking the cure', and by the 1720's Bath was on the way to becoming a highly fashionable spa. With this rise in popularity of the springs and a concurrent need for more bathing and housing facilities, construction excavations were begun which resulted in the discovery of the ancient Roman foundations. Archaeological excavations have continued to the present day and the city of Bath now boasts a Roman monument unparalleled in north-western Europe. Scientific study of the waters of Bath spring have revealed the presence of 43 different minerals including iron, magnesium, potassium, copper and radium. The prehistoric, Roman and early Christian people using the springs had no (known) way of determining the nature of these minerals yet none the less the springs have been venerated as a healing site since time immemorial. Astute readers will recognize in this matter another indication of the extraordinary (and little understood) energetic resonance between humans and the earth.