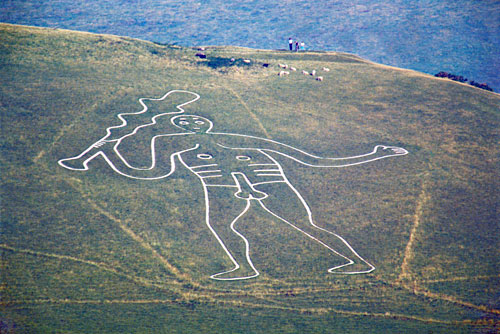 The Cerne Abbas Giant with sheep and shepherd over left shoulder


Upon a hill rising from the small Dorset village of Cerne Abbas, the 60-meter tall Cerne giant and the Maypole mound above his head have marked a fertility power place since ancient times. The deep trenches (cut into the chalk rock of the hillside) outlining the giant's form have been maintained by generation after generation of local inhabitants since at least the 2nd millennium BC. Reporting on pagan May Day festivities in his 'Anatomy of Abuses' (1583), Philip Stubbs wrote:

"Hundreds of men, women, and children go off to the woods and groves and spend all the night in pastimes, and in the morning return with birch boughs and branches of trees to deck their assembles withall....I have heard it credibly reported by men of great gravity that, of a hundred maids going to the woods, there have scarcely the third part of them returned home again as they went."

Maypole dancing still occurred at the site as recently as 1635 when Christian authorities finally suppressed the pagan festivals. During prudish Victorian times the trenches of the giant's penis were filled with dirt and hidden beneath grass. The giant, whose name may derive from the Celtic fertility god Cernunnos, has the legendary power to cure barrenness in women, and childless couples still copulate while lying on the grass in the giant's phallus. A sight line taken up the giant's penis on May Day points directly at the sun as it rises over the crest of the hill.

Below the giant flows an ancient holy well, once known as the `silver well' but renamed St. Augustine's Well after the arrival of Christianity in the area. St Augustine is said to have leant on his staff while preaching at the site, and where the staff touched

the ground, the well sprang forth. Local folklore tells how the people of Cerne Abbas drove Augustine away, preferring to remain good honest pagans, and that their children were all born with fishes' tails until they converted to the new religion! Unlike many pagan wells taken over by the Christians in England, the springs are still flowing and the site has a wonderful feminine energy that balances the power of the male god on the hill above.