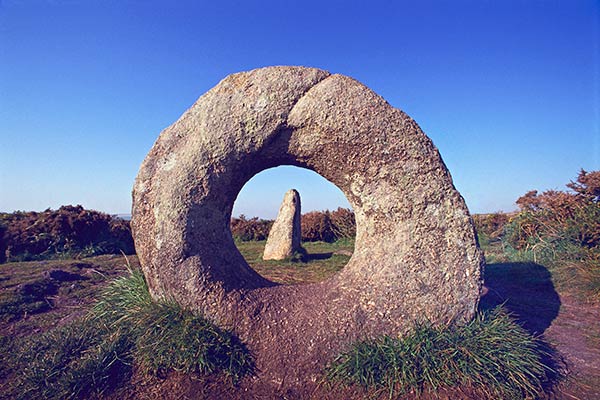 Located near Penzance in the west Cornish moors is the unique and enigmatic Men-an-Tol stone. Archaeologists suggest the three stones that comprise the Men-an-Tol are the remains of a Neolithic tomb because various types of holed stones have been found near the entrances of different ancient burial chambers. Ancient folklore of the surrounding region, however, explains that the center stone has fertilizing and energizing properties capable of curing almost any ailment when crawled through towards the sun. Young children were passed three times, naked, through the hole and then dragged through the grass three times toward the east, in order to cure rickets or tuberculosis. Adults, seeking relief from rheumatism or spinal problems, crawled nine times through the hole in a sunwise direction. The Men-an-Tol is also thought to be an instrument for measuring the May-August sunrise line, and in reverse direction, the February-November sunset. Some visitors after climbing through the hole report feelings of euphoria and well being. Contemporary medical theory speaks of psychosomatic illness and the mind-body connection. Perhaps much disease is simply dis-ease of the spirit and psyche, and thereby the ease and happiness visitors experience at the Men-an-Tol may have been the cause of the physical healings of ancient people.